There’s something satisfying about aerial combat in games. Whether you prefer that arcade-style approach in Ace Combat to the space setting of Star Wars: Squadrons, taking to the skies and fending off invading forces has always been entertaining, so it’s quite refreshing to see an experience set within a pure fantasy setting. Developed by Tomas Sala, The Falconeer is undeniably a labour of love, having been developed as a solo project for several years. Due to launch on PC, Xbox One and Xbox Series X|S, it holds a few flaws but ultimately was worth the wait.

This story takes us to the Great Ursee, a mysterious land covered by a seemingly never-ending ocean, one which holds many secrets. Ruled by the Imperium, power resides within the rich Imperial Houses, and it’s a tale told across multiple chapters, letting you play different factions as piracy begins to rise. Between larger houses like House Borgia and Mercius, small trading outposts like Dunkle and the Mancer Order which seeks to maintain peace, each chapter explores a new element of the Great Ursee, bringing an intriguing insight into the politics which rule these waves.

You start chapters by choosing your rider and falcon, even picking from a list of origin stories for added customisation. Falcons hold different stats for health, agility, speed and different weapons, so it pays to carefully assess your options. Falconeers are your more traditional riders, bound to an ancient way of life and wield a lightning caster to fend off threats. Mercenaries will fly for coin, working for whoever can pay for them. The Imperial freelancer works outside the imperium’s hierarchy, whilst Mancer Seekers are always seeking new relics to discover. 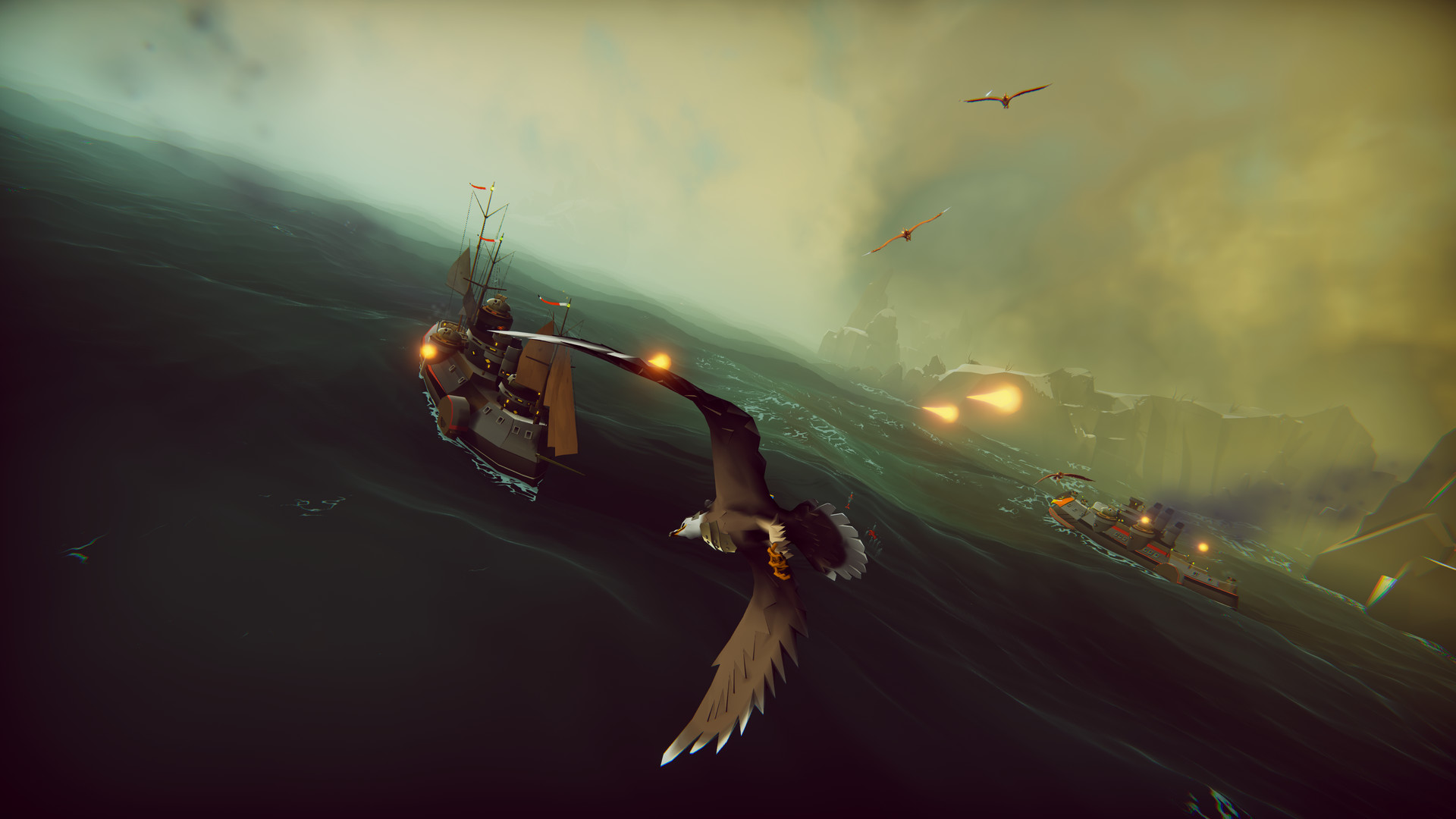 Once you begin, players enter an open-world setting, and there’s a decently sized campaign here, taking around 12 hours to finish everything. Players can freely explore the land if they wish and gameplay is guided by a minimap, which places yellow markers to find your objective, so you’ll never get lost. If you wanted greater immersion, that display can also be turned off. As a world covered by endless sea, it does feel empty in places, but if you speak with the freeman, they’ll inform you of bounties to undertake to keep you busy, offering additional splinters (Ursee’s currency) as a reward.

If you proceed with the story, these missions will have you gathering intel, taking down enemy targets, escort missions and more, presenting enough variety to keep matters interesting. You’ll receive rewards for completing missions, offering new items or splinters, and players earn bonuses if they hit set criteria like high accuracy ratings. Splinters can buy improvements for your falcon, including potions, to improve your warbird’s abilities like adding health regeneration, also letting you buy new weapons.

You’ll need to keep two things in check during fights: health and energy. If you run out of health, the entire mission restarts, there’s no checkpoints here. Speed can be maintained at a steady pace, gained through diving but lost when you ascend. A shallow ascent loses less energy than a steep one, however, so the key to maintaining velocity is a steady flight path. Wingmen will also be assigned to you in missions, targeting your chosen foe by pressing the D-Pad. Though missions can be fun, fights do drag on at times, and it’s a bit sensitive with aiming, so it takes some getting used to. 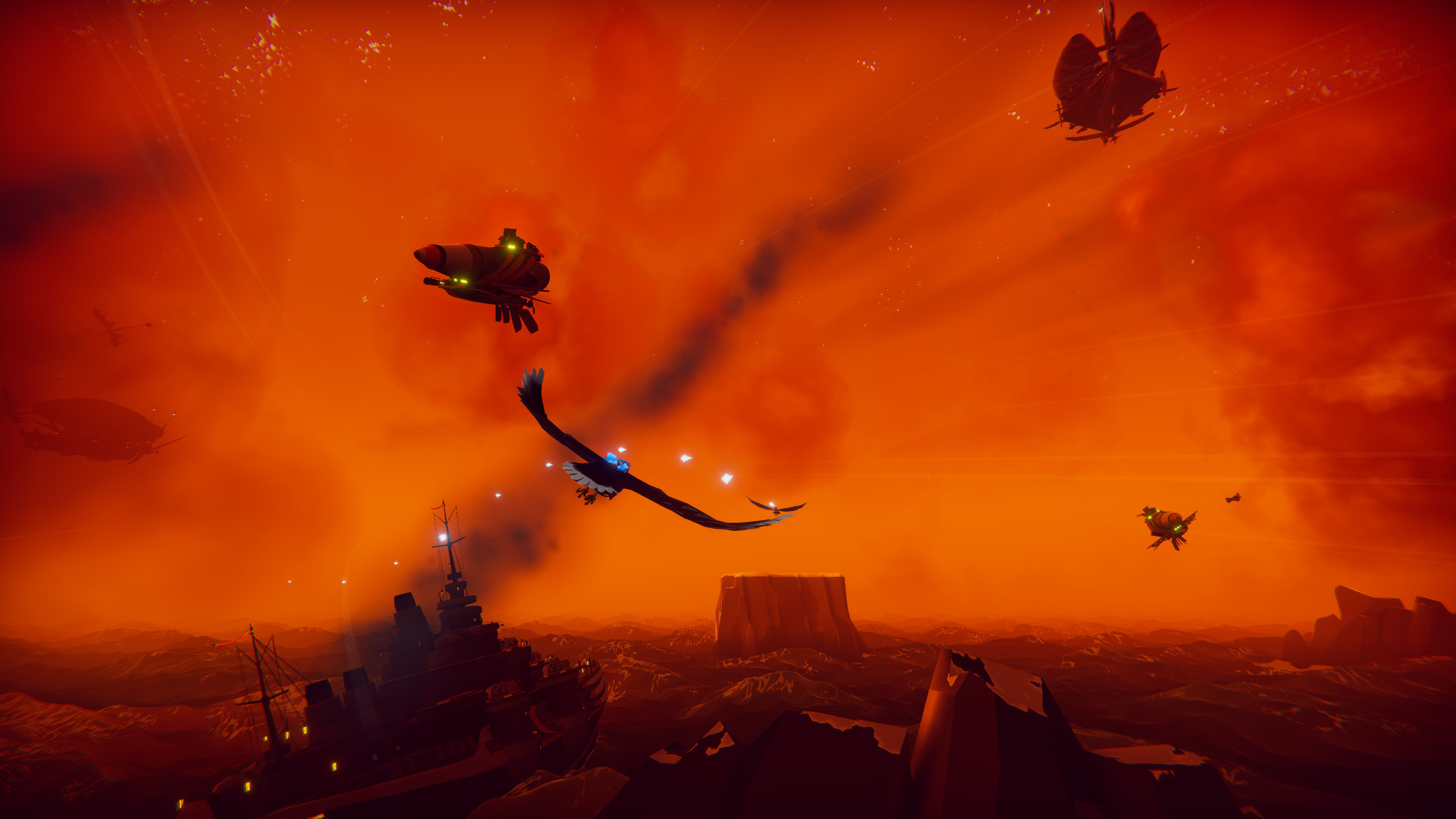 Your biggest threat is pirates, and they’ll often interfere with missions. Battles feel like entering all-range in Star Fox, with free movement around the map as you engage hostile forces. You can roll to dodge attacks, lock onto targets and start shooting with your equipped weapon, giving you a lightning caster as default choice but more are obtainable, including the heavy-duty Mancer Arm Cannon. Your best solution is to be above enemies when attacking, which is made easier by gaining energy from updrafts, locking onto them with the B button. The Falconeer can make you work for those kills, and some fights prove tough, especially with multiple combatants. It’s certainly enjoyable but it never truly felt exhilarating to take down foes.

As soon as you load up this game, you’ll immediately notice the beautiful scenery, which can all be captured within the photo mode. It is visually stunning and quite notably, doesn’t use any form of texturing to bring it to life, leaving a very clean end result. Though it’s not always particularly colourful across the Ursee, there’s a lot of life within these waves, and it looks absolutely gorgeous.

It’s clear that Tomas Sala has put a lot of effort into bringing us The Falconeer and it’s an absolutely applaudable effort. Boasting some impressive artistic direction, smooth performance, and enjoyable open-world exploration, it comes packed within an intriguing story that left me wanting to know more. It isn’t perfect though, and there are certainly flaws within the combat system, but ultimately, if you’re a fan of aerial combat that’s looking for something different, this is one game which comes recommended.