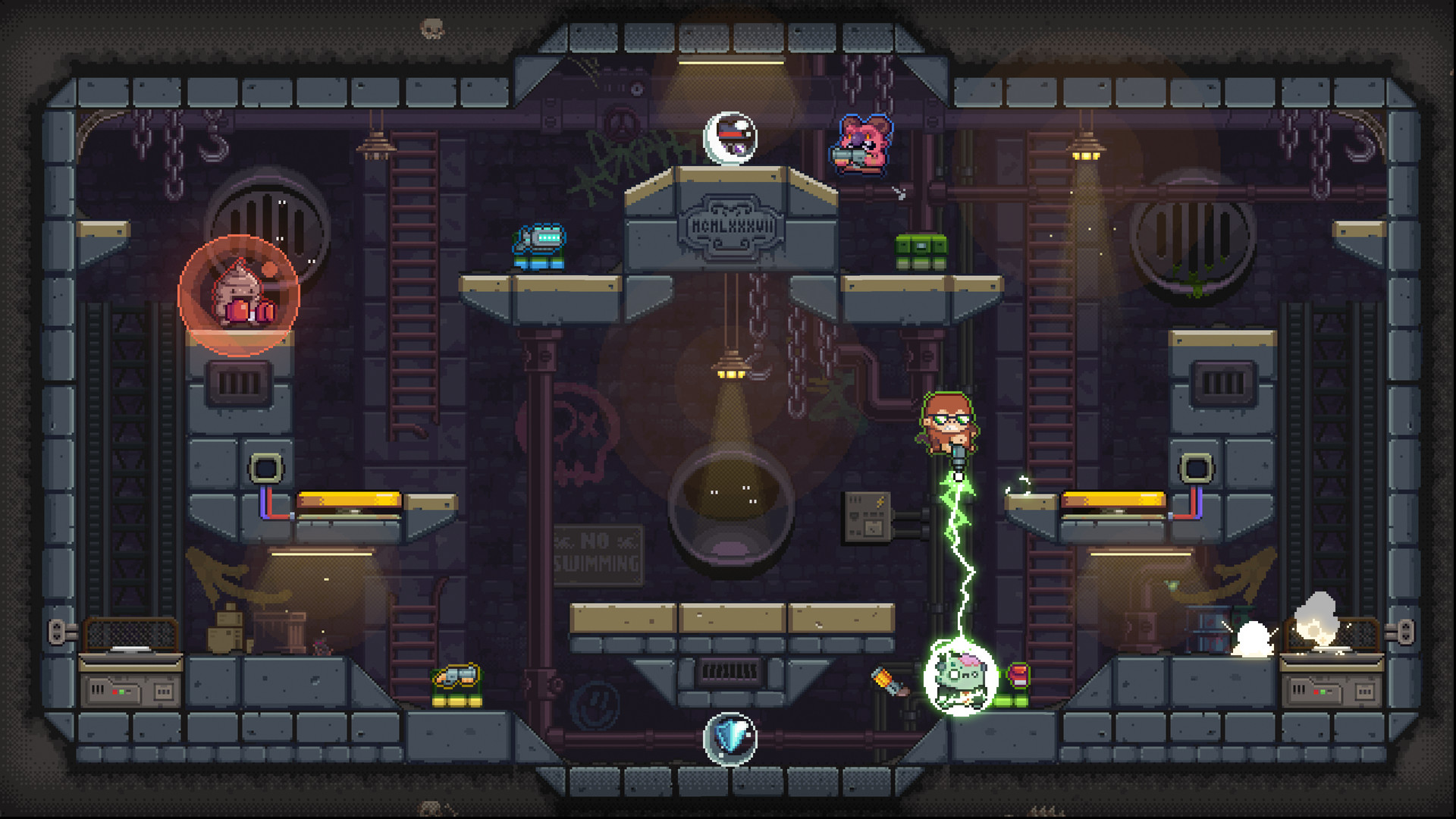 You might not immediately think of 2D arena brawlers as being a crowded space, but there sure is a wealth of them. Some sideline their competitive arenas like Spelunky, Rain World, or Shovel Knight Showdown. Some really are exclusively their local/online arena experiences like Retimed, Crashnauts, CHOP, Hookbots, Hot Shot Burn, etc. Many of these are pitched at price points of £10 and above. You could say it’s a genre-wide value proposition quandary. One you’ll have to subjectively confront as a consumer. Developers still need to get sufficiently compensated. Is this inherently more limited genre worth investing in? Some make it work more than others.

Guntastic makes me think of how that Halo “30 seconds of fun” quote by Jaime Griesemer has been taken out of context for almost two decades. What he meant was that a core “30 seconds of fun” played out against a background of as much variation in environments, weapons, vehicles, enemies, and scenarios, as you can pack in, was enough for a full game. No 30 seconds are exactly the same.

30 seconds is the magic number it seems! Guntastic boasts a slim, but a splendidly solid core of 10-25 seconds of pick-up-and-play gameplay stretched over two-minute games. This wouldn’t be an issue if every round didn’t feel more or less exactly the same. You’ll very easily see the entire game within two minutes in fact. The variation proviso to that famous maxim just isn’t here. 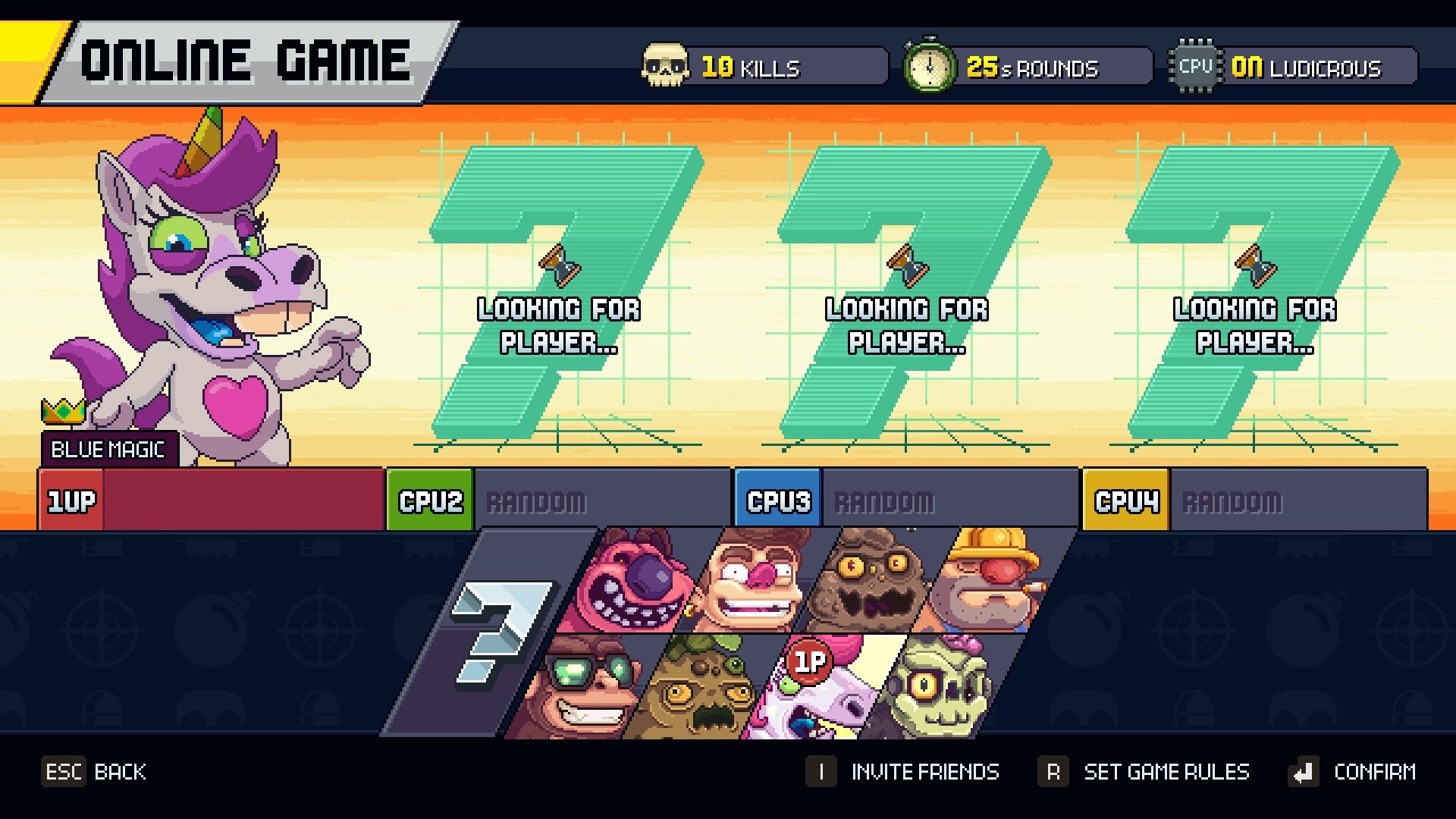 And I do feel bad slighting it for that. This is a game from Ludicrous Games, just two developers in Francesco Camarlinghi and Simone Ferroni. A lot of work undeniably goes into creating that core arcade experience, and it’s a criticism you could easily level at many games and their gameplay loops. It’s just that Guntastic really does show its complete hand faster than most.

Still, that core gameplay experience is certainly polished to a mirror shine. It’s fast-paced and punchy. It’s mostly a reactive play experience, but with somewhat of a skill ceiling – as is evident if you switch the CPU players to “ludicrous” difficulty. It’s a simple, successful homage to 16-bit coin-op games for sure. Right down to the era nostalgic tracks it plays on a loop.

Coincidentally, another arena brawler, 2015’s Duck Game received a recent update, and it makes for an apropos comparison. Truly the biggest deficiencies Guntastic has is that lack of variation and a dearth of fine touches to set it apart. When the genre is so inherently vulnerable to repetition, it needs something… anything. 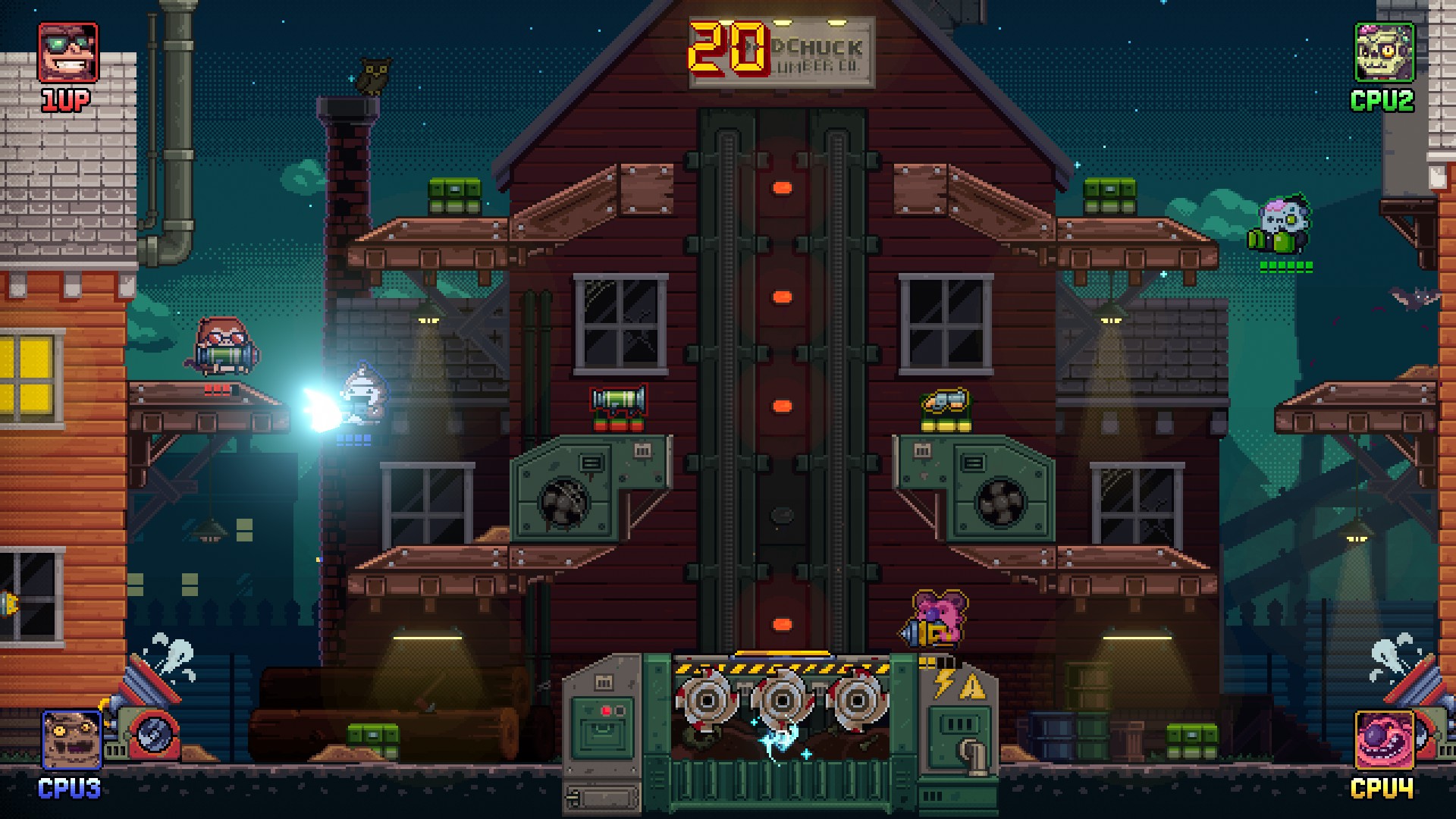 Whilst its hand-crafted levels feature some unique elements like a central lift with saws on it, a train that flattens anyone caught at the bottom, portals, powerups, etc, they still feel like small flirtations with variation. Weapons too threaten to be interesting with walking bombs reminiscent of the Worms series and driller-heads that can travel straight through any wall/platform, but it leaves the creativity there. Kills are almost too easy and fast and arenas too simple and open to allow any room for fine-strategy or the environmental variation to mean much.

Duck Game, by comparison, is less conventional with its weapons and feels more like a playful simulation. As with TowerFall, an eye for detail like zooming in depending on how far apart players are, complex physics lifting the skill ceiling of kills, instant replays, and a tension between different ways of dispatching foes (should you go for the bounce on the head vs long-range arrows, etc) help keep a consistently entertaining unpredictability to proceedings. It also helps that they both simply had more in raw content to offer alongside that core arena experience.

Guntastic is visually appealing, if not erring on being presentationally disinteresting a lot of the time. From a sewer environment to an Egyptian temple, the platform setup is mostly the same for the very limited number of maps. The characters are an interesting mix of monkey, builder, zombie, demon, unicorn, etc. Much like the environments, though, there isn’t any logical coherence to any of it. Here are some themed environments and characters – go to town. It’s an arena brawler, what more do you want from us? 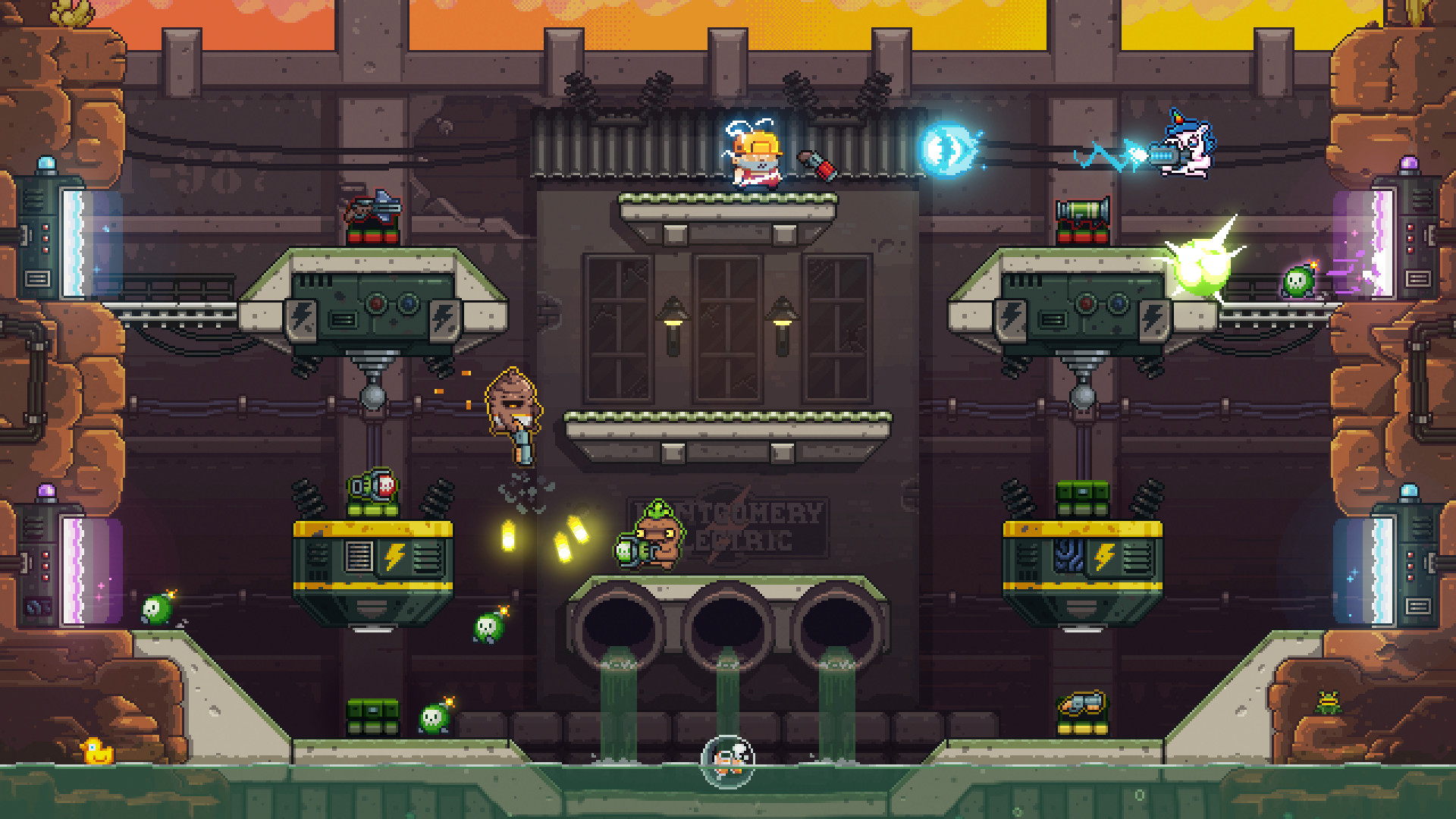 Even mode customisation is very thin on the ground. Unlike many brawlers, it’s the kills that matter, even if you die in the process. This means playing conservatively doesn’t pay off (arguably a good thing), but with no alternative to this, rounds do just devolve into quick, rather random dispatches of foes/friends. It’s much easier to play strategically when it pays to think about self-preservation. The only options at present are setting CPU players on/off and their difficulty, the winning number of kills, and the round timer length.

Thank god for CPU players, though. Once not a feature of Guntastic in its early access life, they’re necessary when the online space is so contested. There’s a Discord group if you want to connect with others, but it’s most likely the case that you’re going to be limited to AI or local competitors for blast targets. These are ultra-competent AI foes, though. I might grumble when I’ve collected an invisibility power up and still get instantly shot, but at least having CPUs so formidable allows you a space to feel like you’re facing human-level players when the circumstances don’t permit it.

I don’t like reviews coming down to value propositions, however unavoidable it can be. Indeed, if 2D arena brawlers are your genre of choice, there’s no saying how many hours you could happily sink into Guntastic’s 25 seconds of fun on repeat. What I can say is that besides a solid core gameplay loop which has clearly had a lot of love poured into it over its early access life, the sheer dearth of content means you’d have to love every little bit an awful lot to make the most of Guntastic. It may not be exactly Gun-tastic or Gun-iconoclastic, but it’s Gun-competent and good Gun-fun.