I will make no bones about this: I did not like Sheltered 2 much. It sets expectations for what you’ll be dealing with, and then decides to go about it in a pandering and tedious manner. It glosses over a lot of what made me raise my eyebrow in interest during its character creation.

Sheltered 2 sees you managing a trio of post-apocalyptic survivors’ broader activities (exploring, harvesting plants and crafting), who must not only make their abandoned shelter a livable space, but deal with six other factions that are currently vying for control over the area, at the same time.

Up front, Sheltered 2’s character creation promises a game that will have you dealing with the aftermath of a world that has gone to hell. You don’t just simply place points into attributes such as strength and charisma, but manage traits that positively or negatively impact your leader—that means you also don’t get full control over the rest of your crew, and anyone else who joins you will be randomly generated personalities.

For instance, you could place all your negative traits into being poor at combat and simply focus on the conversation or maintenance. And with the way that each trait is described, they come off a lot more involved than they eventually turn out to be—the stark truth is that their differences are so minute, it hardly affects the game in any meaningful way. 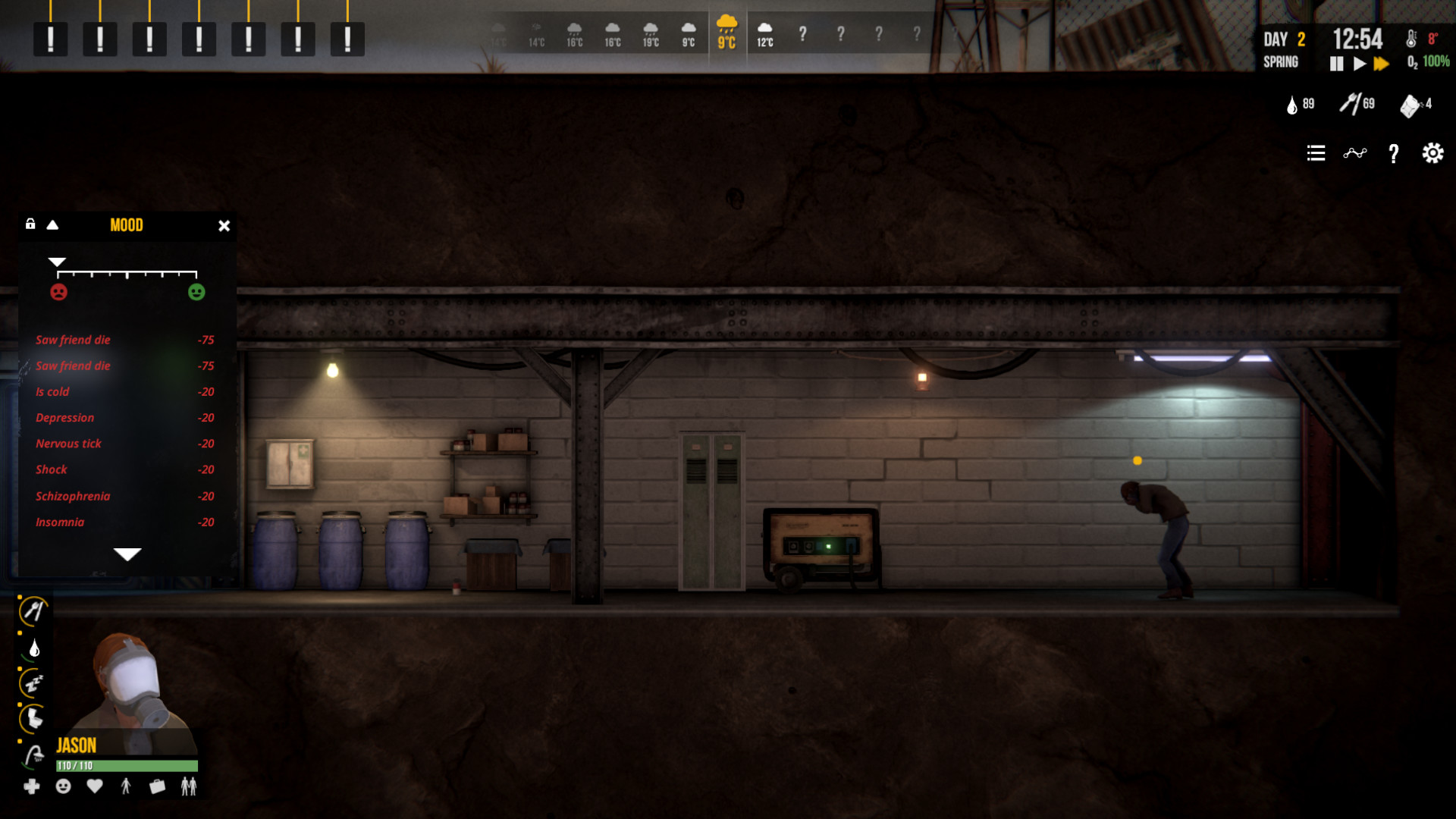 The survivors automatically manage the small things themselves, with options to be more proactive about going to the toilet or feeding themselves. You’ll have them craft facilities and various items to help them get comfortable, while sending them out on scouting missions, which will help you do jobs for the other factions you’ve encountered or collect resources.

The thing is that all these busy work can be so dull. It attempts to keep you on your toes by driving tension through its slow pace and fueling uncertainty with limited resources, but it very quickly loses steam. Large swaths of the game are about waiting for things to happen—like for people to come back from exploring, crafting, or using the toilet—while major events hardly feel impactful, because it very rarely takes into account interactions between the survivors.

The various factions also suffer from the same bothersome issue. While they come off as vastly different and deep, you eventually discover that there’s rarely any difference between the all-women group, The Black Roses and the religious zealots known as The Church of Hope.

Plus, beyond the character creation, the only time any kind of interaction takes place is when you meet the members of the factions out in the wastes. Yet they too are lifeless husks and could have been far more. 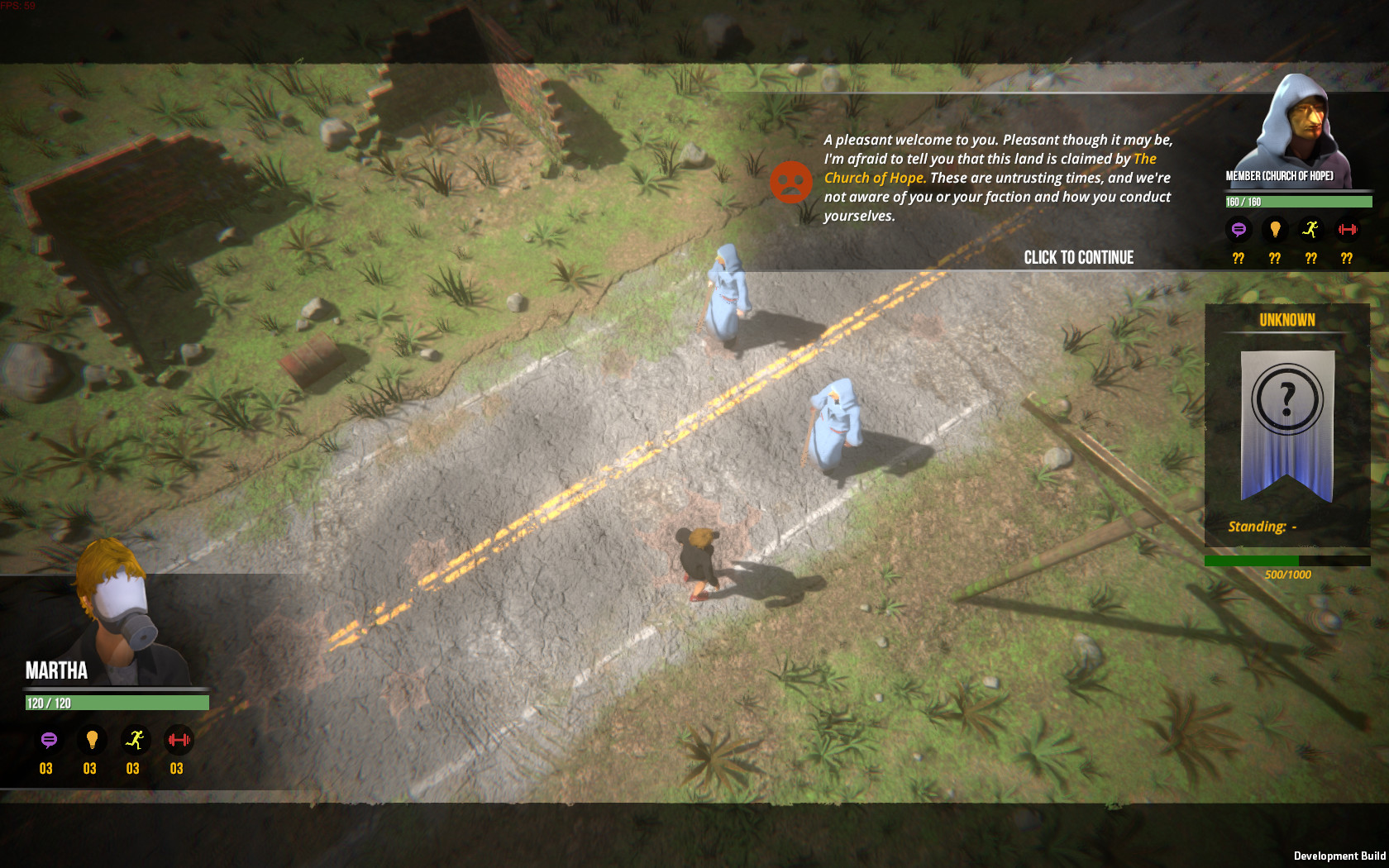 It thus came as no surprise that conversations with these husks are also dry, with very little to do other than forging partnerships with factions or engaging in combat. Even then, combat is so monotonous that by the time I came to write this review, I just couldn’t care that I lost two people.

Exploration, too, might lead to random encounters, but these too are more of the same. With no real need to monitor your exploration crew between events—the game will alert you if you need to do anything—you spend a lot of time staring at the remaining survivors doing their chores until resources are refilled.

Compounding this mess is crafting, which is exponentially tedious. It’s necessary for building basic amenities like showers, but resources won’t be automatically sorted out for you, which means that you’ll need to manually pick out the resources yourself. As a result there’s also a lot of switching between the menus, if only to remind yourself what resources you’ll need to complete your task. What’s more is that the game is simply dreary to stare at, with no colour to its vision of the post-apocalypse. Shades of brown and grey can work great if the content inside is entertaining, but Sheltered 2 doesn’t have much to offer.

That’s the worst thing about Sheltered 2: that even though it replicates the modern harshness of the survival simulation genre that exploded off the back of DayZ’s popularity, it is incredibly boring. It lacks any of the nuance of its peers, such as the painful penalties that would be imposed on failures in Frostpunk, and the tightly-wound tension of Rust.

Despite Sheltered 2’s attempts to pander to this crowd, it largely fails to bring any new ideas to the table. Its mindless interactivity with its post-apocalyptic world, combined with an obtuse crafting system, has resulted in a game that is more annoying than tantalising.