That’s Erin’s voice on the walkie talkie, the little kid who guides you through the hallowed hallways of Gravewood High. It’s a crystallisation of fifty years of high-school horror tropes combined with stealth game traps. This school, in particular, is stalked by Mr. Hyde, a dreadful, long limbed, hot breathed teacher who gives chase on sight. That’s not to mention the trickster ghosts, oozing mounds of eyes and the odd sense that the laws of time and space no longer apply here. Yet the main threat is still Mr. Hyde. Beware his persistent searching, his security cameras, and that menacing laugh as he wraps his arms around you.

Set in 80s or 90s America, Gravewood High is, in many ways, indebted to American horror tropes–specifically the Stephen King-like idea of a ‘place of power’. Like the Overlook Hotel from The Shining, Gravewood High looks like it has been through several eras of terror.

Your investigation within Gravewood hinges on finding friends who have gone missing there. Through tool-based, object retrieval puzzles, and stealthy evasion, you must get to where your friends have supposedly been taken: the tower, which juts out from the centre of the school, heading into the clouds. 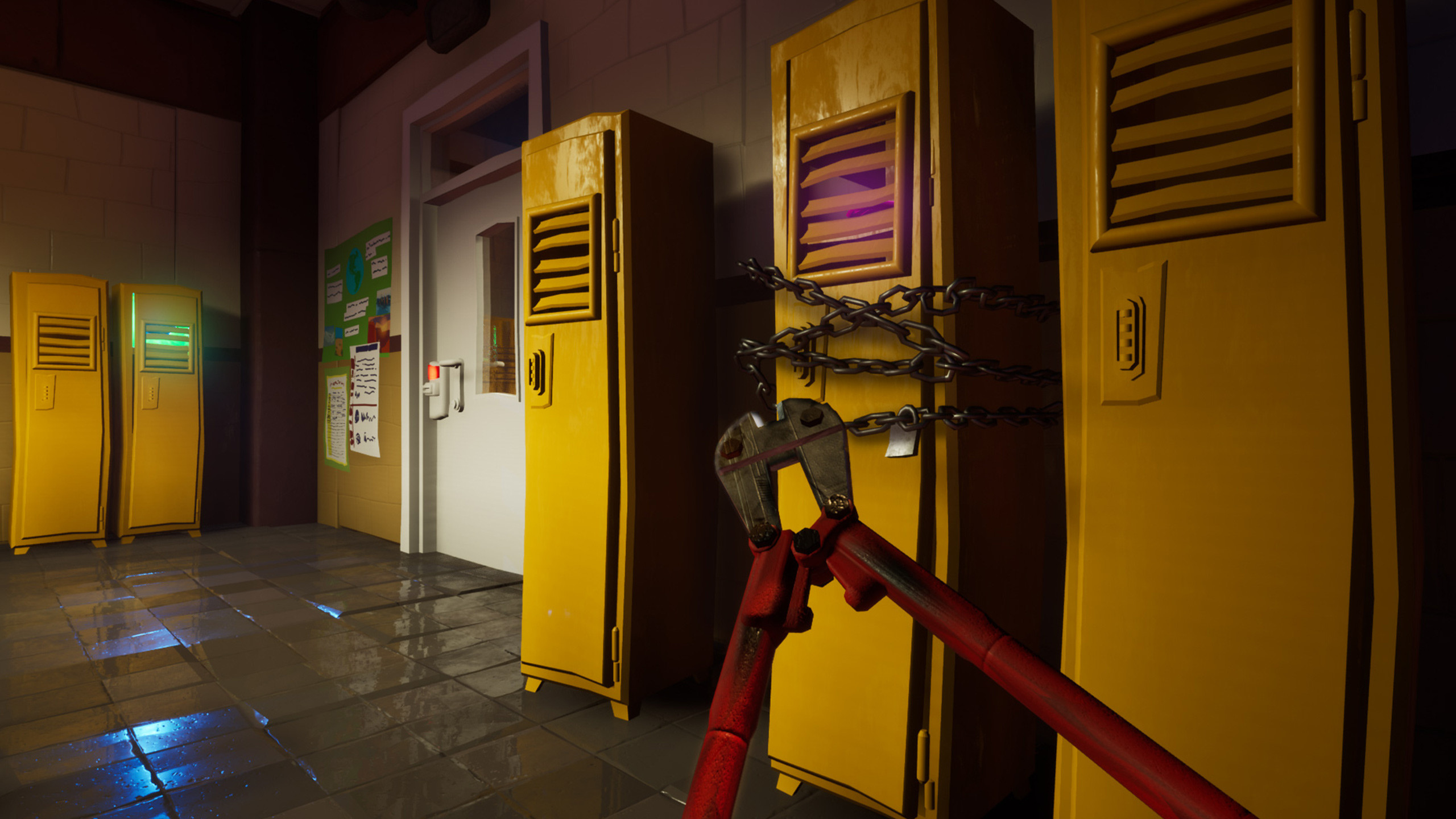 Getting there means surviving every puzzle without being grabbed by Mr. Hyde. This is tricky, not only due to the tendency for long sections without checkpoints, but also the paths and objects surrounding the puzzle rooms changing each time you are captured. This differentiates each attempt at getting past the demon teacher, and thankfully you will retain the keys you find on each run, even if you’re sent back to the start.

Fortunately, the puzzles are simpler than evading Hyde. For all the game’s supernatural elements, outsmarting him is mainly achieved through more analog means: you can use wrenches and bolt cutters to reveal passages for climbing and crawling around in. That is, except for the one gun that runs on void crystals, which can destroy certain walls around the school to create new routes–a hint that the school has quite literally been detached from our dimension.

Some obstacles and threats, however, are either unseen or unnecessarily loud, distorting expectations about the environment. The game overcompensates when it comes to aural obstacles, littering rooms with plant pots and rubber ducks that can’t be moved without commotion. This can cause Gravewood High’s stealth puzzle balance to feel unfair, even bordering on irritating. 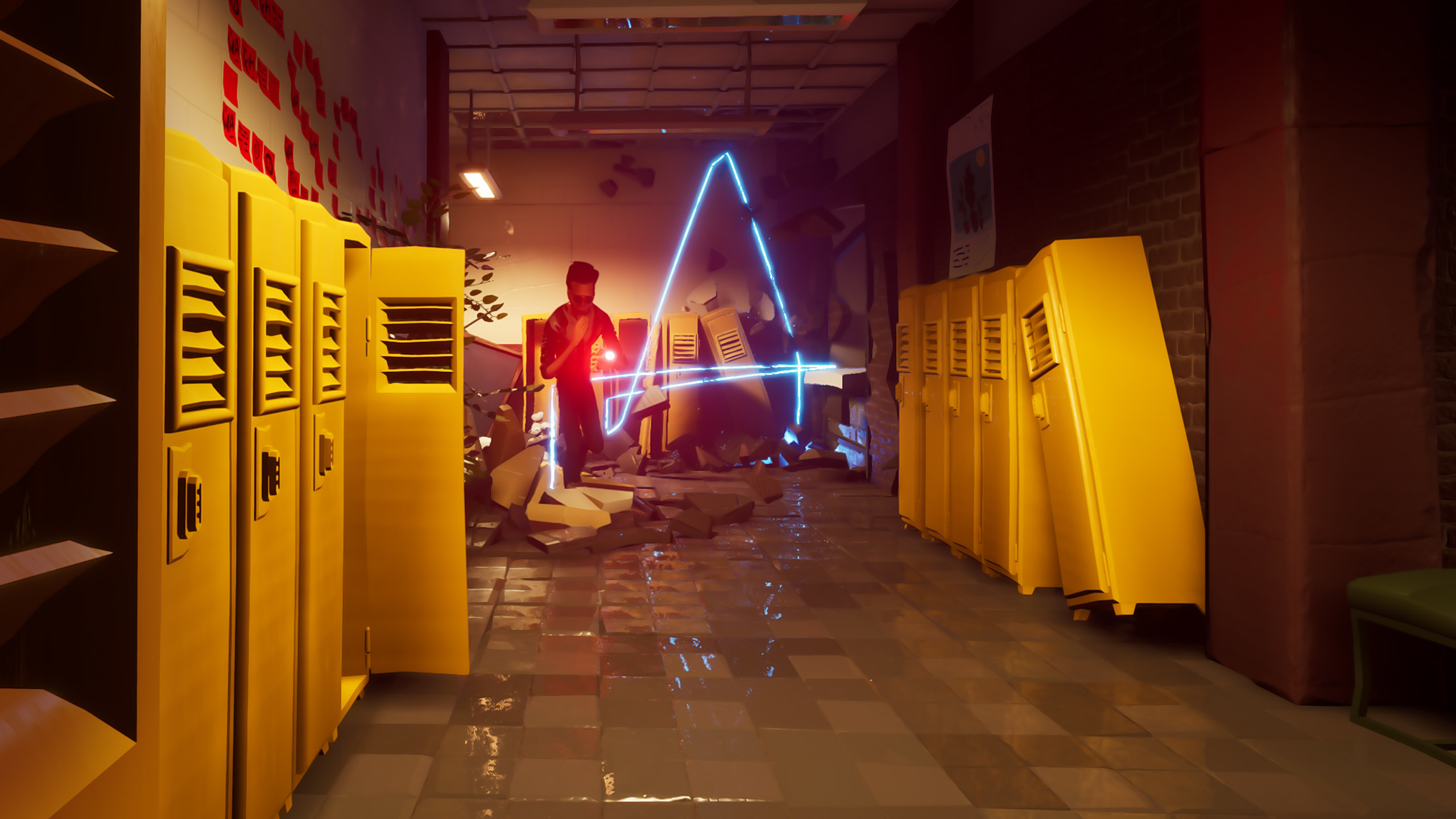 While these happenings and the game’s classroom setting give the impression of an all-American teen horror story, similar to that of the Goosebumps horror books, Gravewood High seems to employ a more sardonic approach.

Take the game’s promotional material that quotes the International Centre for Missing and Exploited Children on the number of missing children per year, while offering advice that these should be ‘handed out anywhere children are present’. The type of American horror invoked leans on conservative ideals of protecting children from corruption. Hyde is that threat, and with your unnamed character, you basically roleplay the plucky independent child who has become a modern American hero.

However, there’s little interest in delving into this beyond its superficial setting, as well as the artefacts and hints of American history that permeate this place. You’ll eventually discover that Gravewood High, for instance, used to be a Civil War fort, and was even turned into a WWII laboratory, but there’s no exploration of the implications of these histories–a lost opportunity that could imbue it with more depth.

Built atop this unexamined well of American horror culture, Gravewood High makes for a mild horror game that relies on the peril of the chase. It’s a frustrating but fun entry into the genre of ‘escape the creepy guy’ games, even if it could have been much more.