I have a complicated relationship with MMOs that’s steadily evolved over the years. I suck at them. Not through lack of skill or experience, at least in this particular context, rather that I can never play them properly. Despite having the opportunity—and of course being heavily encouraged—to play and go questing with countless players from all over the world, ultimately I end up wandering off on my own into the wilds, and it becomes another solo RPG adventure.

So when a game comes along that pitches an adventure truly of your choosing and meeting other players as rare and fleeting should you wish it, it will naturally elicit my best meerkat impression.

Coining the term ‘TMO’ or ‘Tiny Multiplayer Online’, Book of Travels by Swedish studio Might and Delight entered Early Access in October 2021 and puts you into the role of a wanderer in the vast, majestic landscape of the Braided Shore. Your beginnings, your journey, what you learn and delve into along the way: all of this is to be decided by the choices you make. Whether you choose to become versed in the properties of plants, be a danger seeker or simply follow the winds and keep walking, your story is just that: yours. Yours for the shaping. 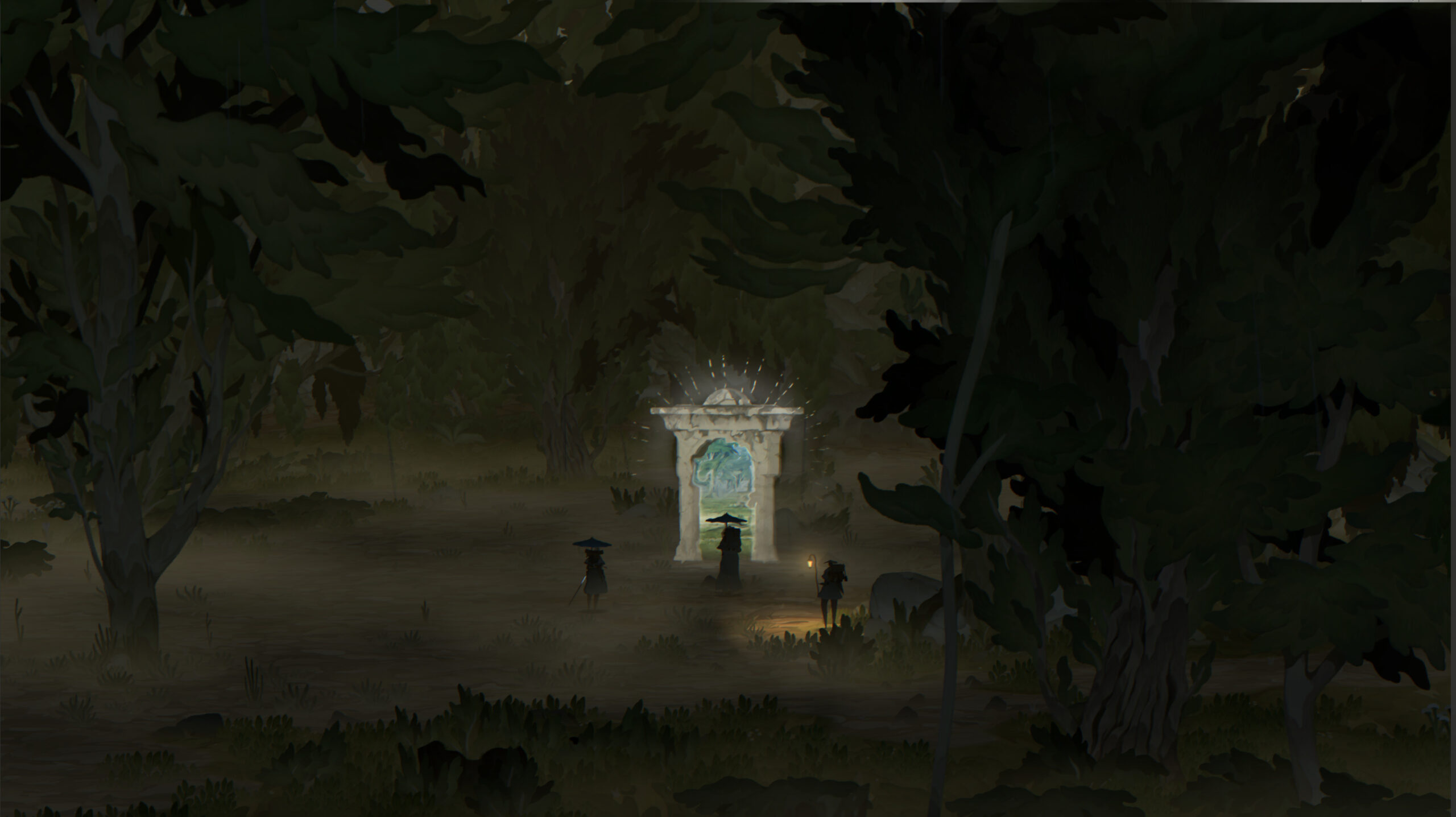 When creating a character, rather than choosing a race or class, you have a selection of ‘forms’ to choose from. These each have a couple of starting skills and serve more as a foundation for you to imprint your own ideas and personality onto. Choosing your upbringing will give you a brief sentence describing it. Take the Mystical for example: “Your child spirit was open to the mysteries. You spent your youth learning to control your mystic gifts”. What this means for your character, if anything at all, is unclear. Are my spells more effective? Do I learn them more quickly? Or is it simply a descriptor? So many questions already.

Once you’ve moulded a form to your satisfaction, you set out into the world. And in the words of a certain Mr Armstrong’s “What a Wonderful World”, and inspired by Eastern art and aesthetics, the delicate watercolour landscape of the Braided Shore is truly unique and captivating. Instantly you feel as though you’ve stepped into the threads of an ancient tapestry. 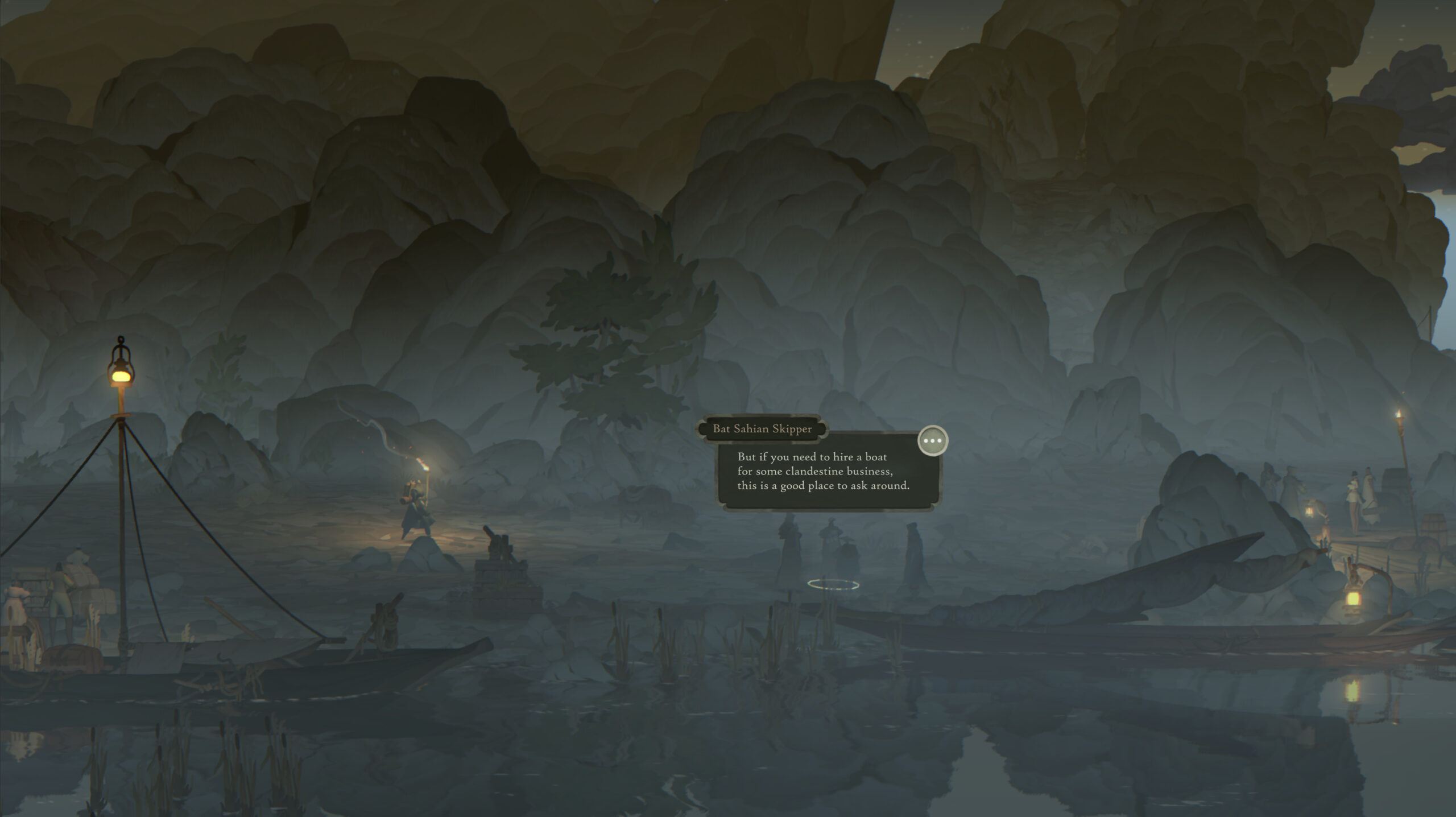 Might and Delight are very up front about how Book of Travels is for wayfinders, and that it won’t plan your route. After a brief tutorial covering some of the game’s elements, you are literally set adrift: pick a direction, head out and see what you discover. Players who are well versed in the realms of tabletop RPGs will feel very much at home. There’s a similar vibe to the story-centric tabletop game Tales of the Arabian Nights about it, minus the quest markers. Depending on the locations you investigate, the events you stumble on or the NPCs you talk to, your character will gain experience and snippets of lore that may or may not be useful in your travels. But again, the extent of this is completely unknown. And speaking of the coined term ‘Tiny Multiplayer Online’? It’s not hyperbole. Each server is limited to seven or eight players each and meeting them is indeed rare. But should you meet a fellow wanderer, there are ‘encounters’ which require co-operation in order to complete.

The communication mechanic is also one of the more interesting elements. Instead of a chat box, you have a selection of icons representing different words or emotions that grows the more you discover. A clever reflection of two people of different languages trying to converse through sporadically learned words or gestures. 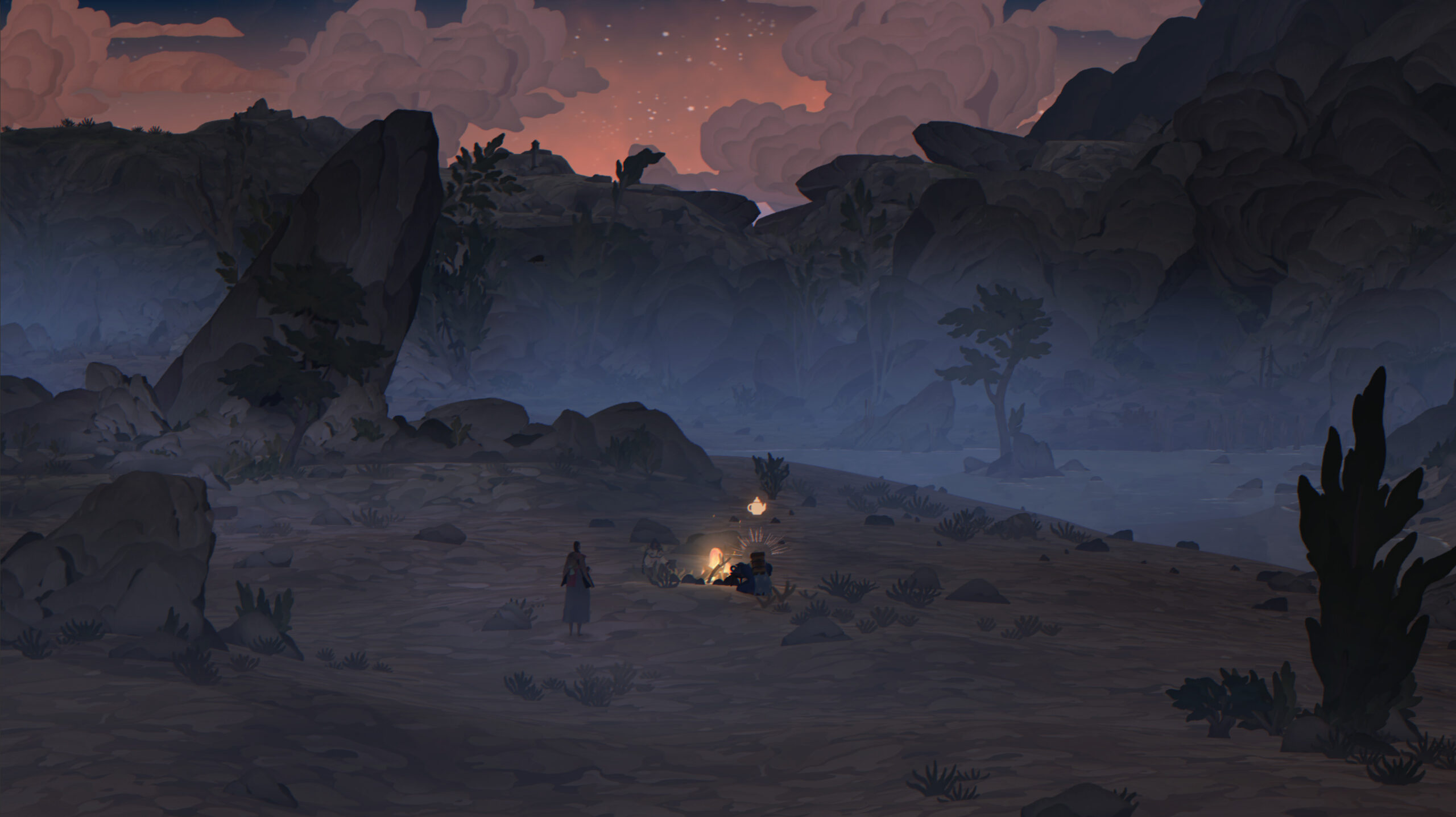 Perhaps it’s a given for some, but one aspect of the Book of Travels experience cannot be stressed enough: this game is a slow burner. Intensely so. That’s not necessarily a bad thing and as mentioned earlier, Might and Delight are very up front about how much of a departure the game is from what you’d expect. But even the disclaimer doesn’t quite prepare you for the considerably slower pace of the game, and many may get caught off guard by it. For some, this can be a counterpoint to the over-the-top grindy atmosphere of traditional MMOs, which will be a breath of fresh air. For others, this will be an energy-sapper. As for myself, I drifted back and forth in between, but slightly more towards the latter than I’d hoped.

Being in Early Access, bugs are of course fairly prevalent and content is a little on the thin side. With nothing to help influence your decisions, it’s easy to find yourself doing very little. Having an affinity for the mystical and being a good Brit, I’d decided to strive to become a savant of Knots (the equivalent of spells) and brew a colossal amount of different tasty teas. But after hours of gameplay, I had barely come across any NPCs nor done much more than picking flowers in a seemingly endless field. And perhaps my skills are indeed wanting after all, but I couldn’t figure out how to brew tea for the life of me. As a Brit (and a Northerner to boot), oh the shame!

Ultimately, Book of Travels is indeed an experience unlike any other, and despite its flaws, it has numerous intriguing elements and a great deal of potential. If your imagination and inspiration is boundless, then you will find a wealth of adventure and enjoyment. If you need a game that offers direction and structure, turn back traveller. Your adventure lies elsewhere.

Rowen is a freelance writer, performer and content creator with a penchant for colourful attire and floral headwear. Bitten by the gaming bug at age five, she is a huge fan of pixel art games, RPGs and point-and-click-adventures. Thrice-yearly, you will find her consuming an ungodly amount of Steam Game Festival demos with copious cups of tea.