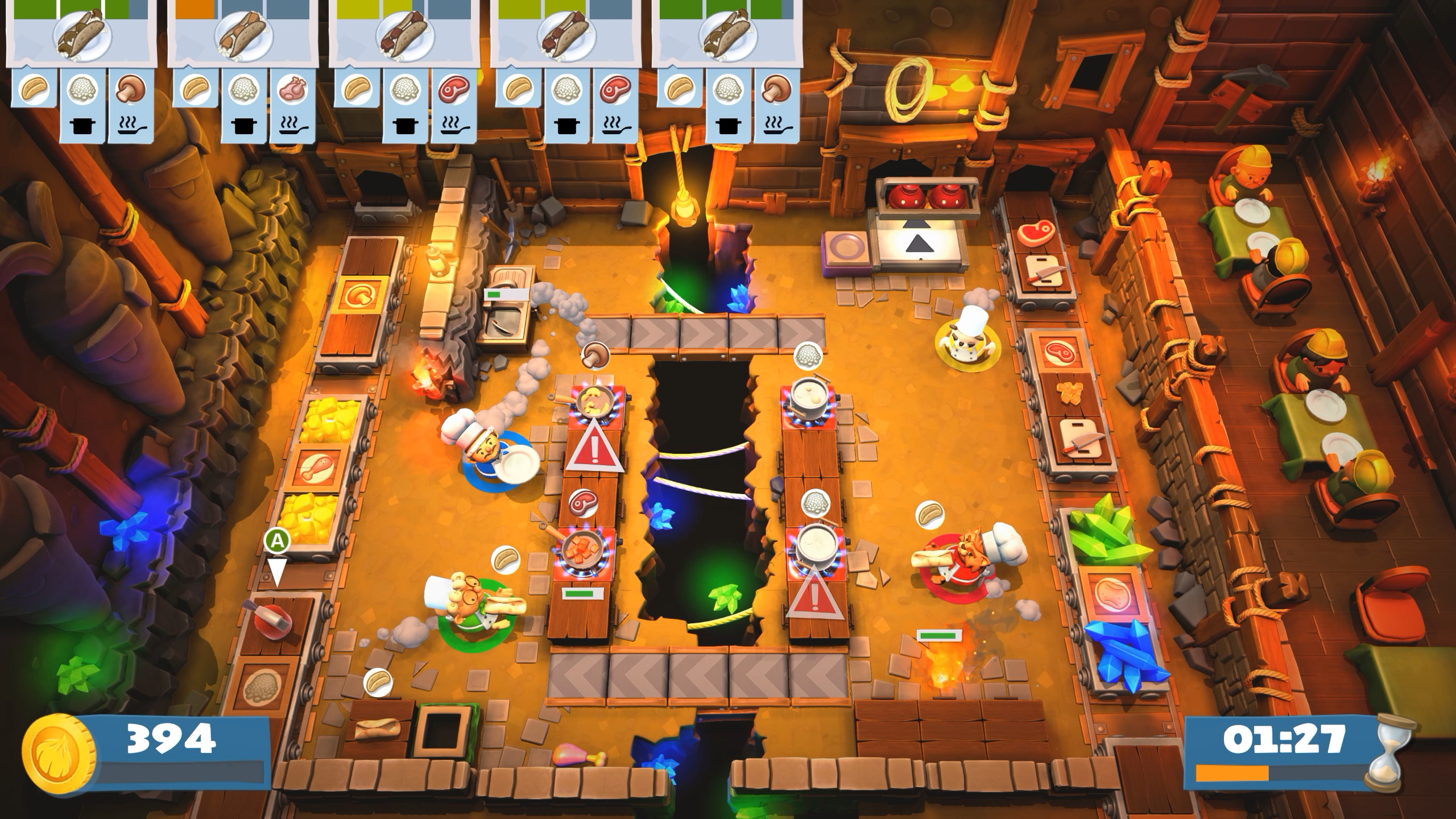 ‘The f***ing pizza is burning!’ your friend shouts. You swear they were calm, once. The screaming is aimless; it’s directed at everyone and at nobody. It could be for you, your friends, it could be for the cat slouched over the armchair.

Whoever it’s for, you didn’t need the warning – you’d already spotted the quickly-charring dough before they did. But oven duty isn’t your job; it’s someone else’s. Boy, have they dropped the custard, though. The crust’s burnt black and now someone needs to put that fire out. Anyone?

Overcooked 2 thrives on this confusion. It rolls around in chaos and people pawning off tasks to others. ‘Have you done the dishes?’ one friend will ask, like your Mum used to when you’d just sat down to watch telly. ‘No. I’m cutting the tomato,’ they say. ‘You do it.’

Ghost Town Games’ sequel to chef simulator Overcooked brings out the inner jobsworth you knew was bubbling away beneath your friends’ pleasant faces.

Much like its predecessor, Overcooked 2 really should be played with up to four of your nearest and dearest. Shove a Joy-con towards whoever’s closest and embark on a journey to help satiate the forever ravenous ‘Unbread’. This resurrected horde was foolishly summoned from their doughy graves by the Onion King, who used the Necro-nomnom-icon (there are plenty of delicious, food-based puns to look forward to in this game) and it’s your job to travel across the colourful world, making a variety of meals and gaining the skills to finally feed the famished foe.

You and your friends will chop your way across Overcooked 2’s eclectic palette, dabbling in cuisine ranging from the beautifully, delicately presented sushi to the simple, but equally as mouth-watering, fried chicken and chips. The menu doesn’t stop there, with pasta, cakes, pancakes, bao buns and more, all adding their own twist on the Overcooked recipe. For returning customers, though, there are some recurring dishes from the first game. Each meal looks scrumptious and edible – when it’s not on fire, that is.

Just like the first game, communication is key to preventing your restaurant from being engulfed in flames as everyone tries to juggle different jobs. For example, someone should ensure there are enough clean dishes to serve food on (tip: there never are), or make sure the meat’s chopped. But what about the pasta? And God! Does anyone know what we need to serve up? That’s a crucial skill, by the way, as completing orders quickly gives more tips and helps multiply said tips. It all adds up to your final score which rewards you with one, two or three golden stars. 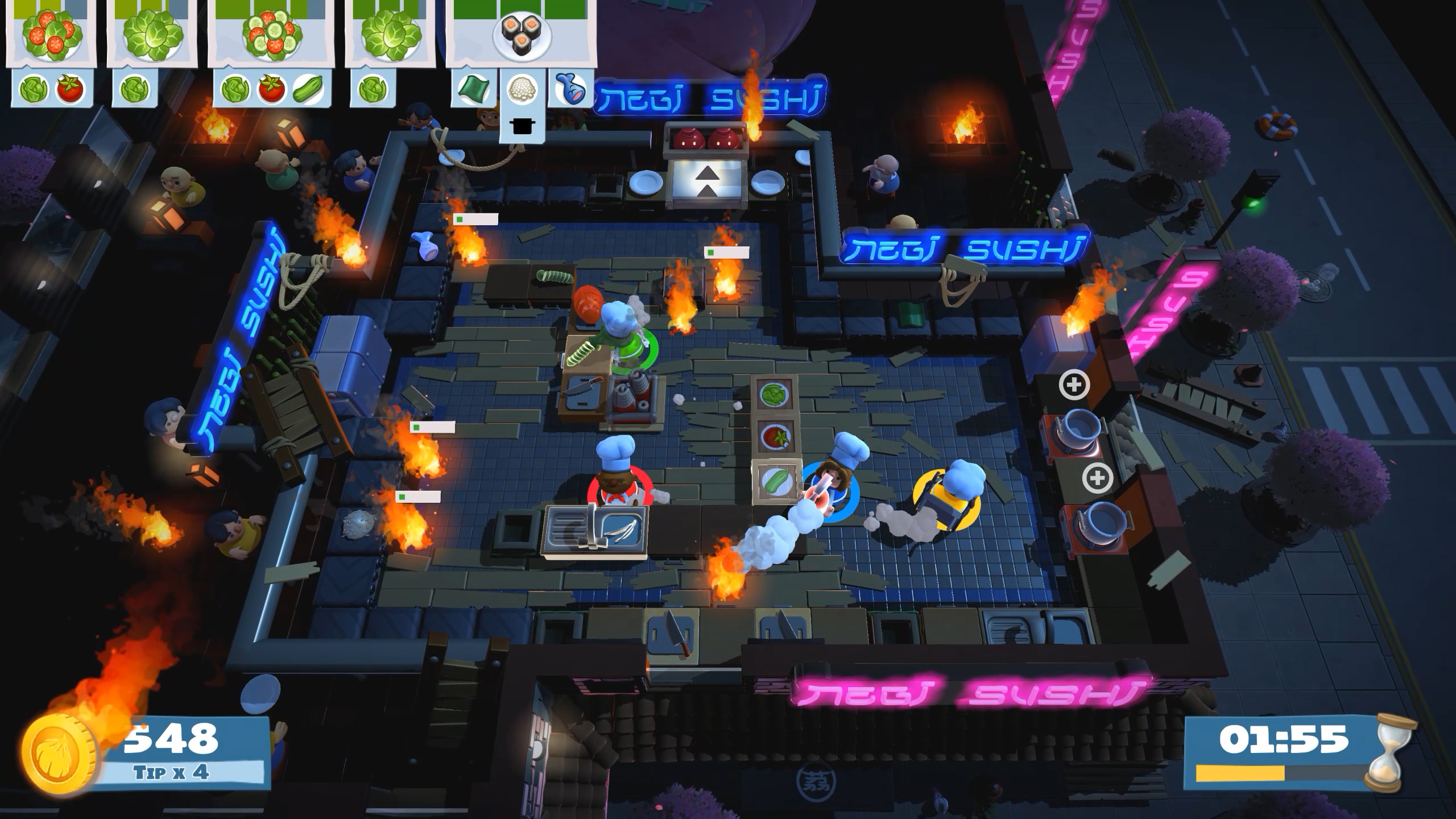 If all of this is sounding familiar, it should. Overcooked 2 has the same juicy filling of hilarity and outright blame when things go bad. It’s equally brilliant when people pull together, understand their roles and function as a proper team of Good Chefs.

It’s a sequel which follows nicely on from the first one, adding different food and ways of cooking, more chefs to unlock and new, infuriatingly-designed levels (in a good way) which includes floors collapsing, portals, conveyor belts, cooking in a hot air balloon and deep within a mine.

However, that doesn’t mean Overcooked 2 runs away from trying something new. It now allows players to fling food around the kitchen like a toddler upset with their mash and peas, attempting to redecorate the walls with green-flecked potato. It may appear like a small change, but like a tiny anchovy, being able to now throw raw and chopped food changes this dish drastically.

Throwing food means you can now biff chopped tomato into your friend’s face. Granted, you were supposed to throw the food somewhere useful but why not be a nuisance? Levels have been designed around it, meaning to be an efficient cook you’ll launch morsels back and forth to your friend on a different raft or over a chasm. It only adds to the food pandemonium already rampant in the game. 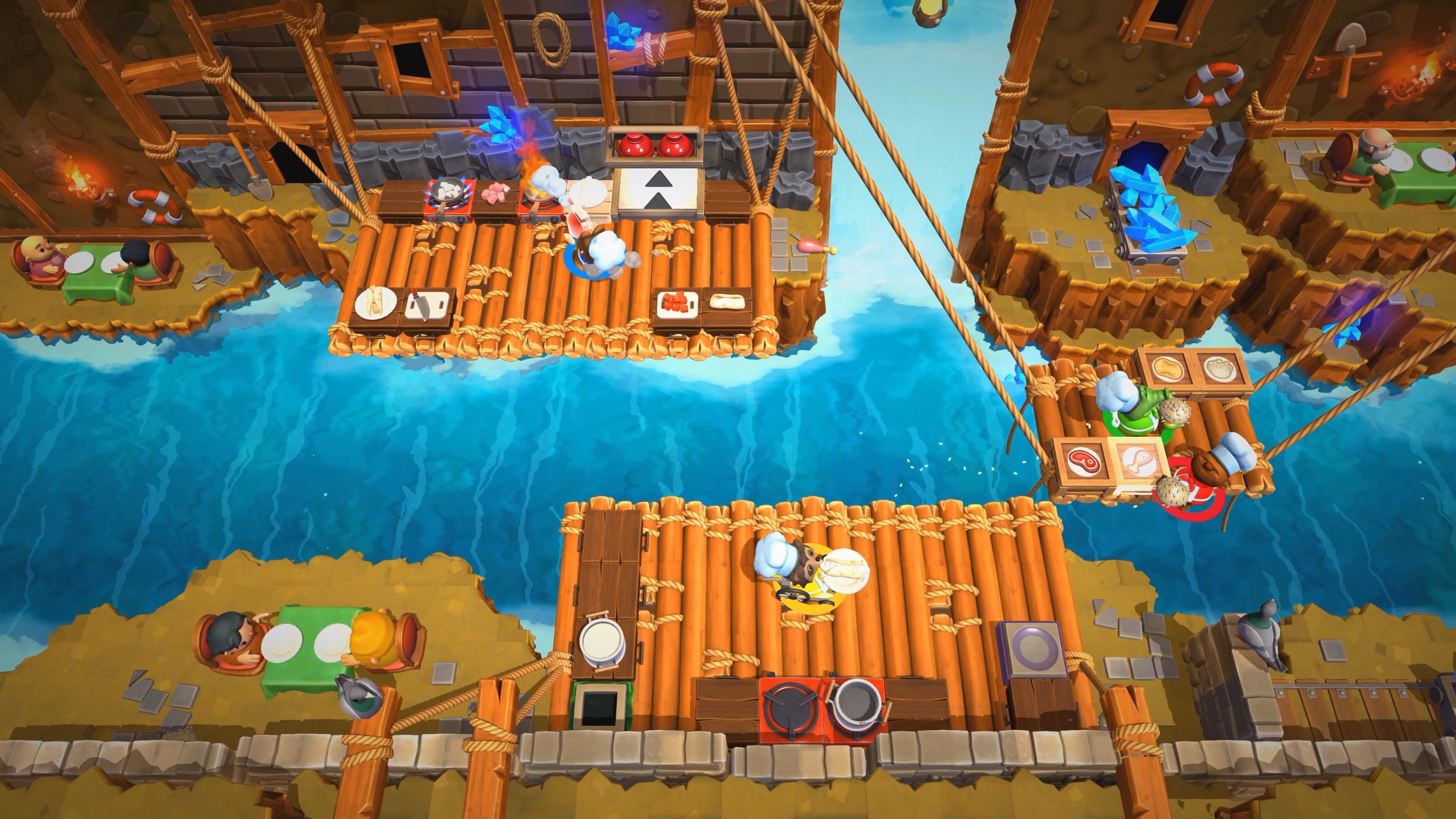 Alongside being able to launch beef a) into your friend’s forehead, or b) onto the grill – whichever is more desirable (it’s usually a), Overcooked 2 has some other quality of life changes as well.

Firstly, it’s added an online mode which is… functional. It’s the same game but has one thing lacking: your friends. It understandably loses a bit of its flare. Ghost Town Games have tried to balance this, though, by introducing a dialogue wheel which allows you to communicate to online players what you’re doing. It has nothing on being able to call your friend a prick, unfortunately.

Secondly, the animation of the cutesy characters has been polished a bit. It’s nothing drastic – the characters still look like a roly-poly toy, scooting across the kitchen. However, the old smoke from the fire extinguisher will be missed. You could turn the room into an 80s music video, whereas now it spurts out in well-detailed puffs.

The sound design is implemented well like before, giving audio clues so it’s easy to understand what’s happening and what other people are doing. It also adds a smattering of panic when the warning for something burning goes off.

Overall, Overcooked 2 is more of the same but with enough of a variation to keep its top spot of being one of the best party games there is to play. It works well enough as a single-player experience but if you can’t shove the responsibility onto someone else, what’s the point?