A bizarre amalgam of papercraft puzzles that’ll linger with you long after the credits roll.

A bizarre amalgam of papercraft puzzles that’ll linger with you long after the credits roll. 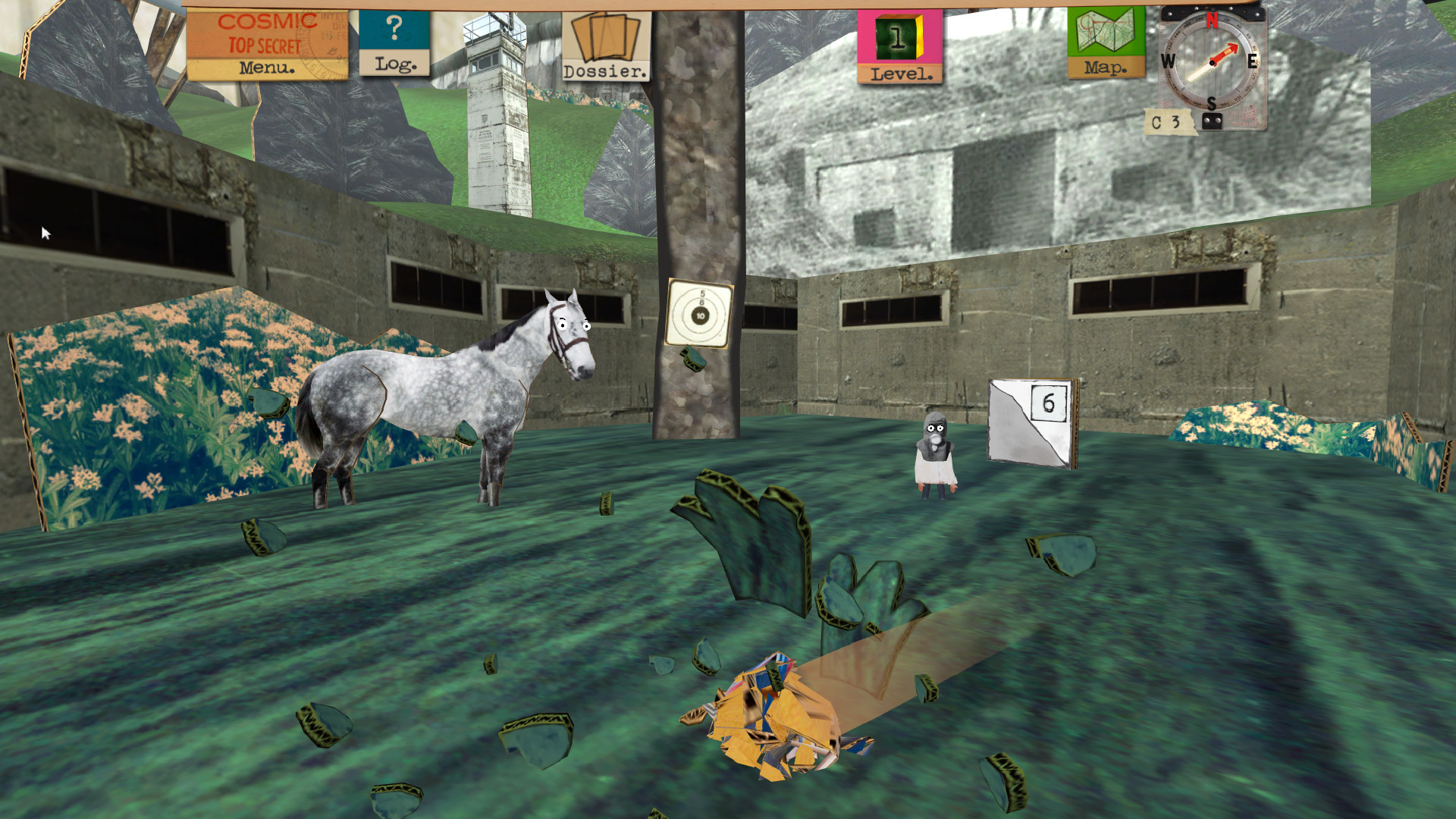 Well, perhaps you have if you’re a rabid fan of the avant-garde musical outfit The Residents, or an individual who consumes surrealistic content on the regular. Even then, you may be astounded by the level of bizarre themes and creativity that’s gone into this title, by far one of the strangest trips you’ll ever take in the form of a video game.

Developer Klassefilm has deftly woven together one of the most uncomfortably odd games ever seen, from its aesthetic to its concept, and though it’s top-down remarkably weird, it’s also an adventure that’s incredibly difficult to put down. 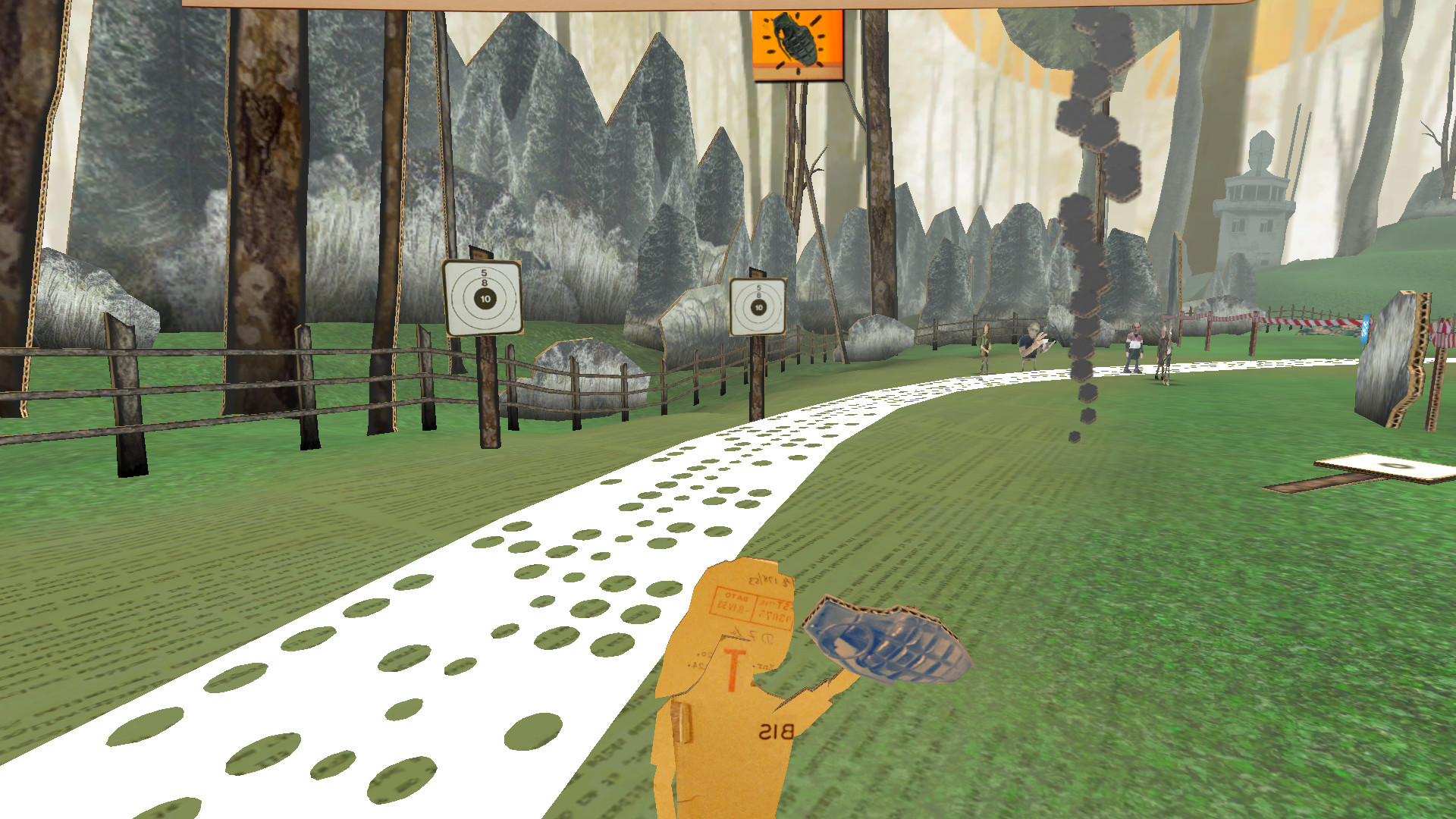 Join protagonist “T” (named for Danish filmmaker and animator Trine Laier) as she embarks on a journey to unravel the secrets behind her parents’ work for the Danish Defence Intelligence Service during the Cold War. It may sound outlandish, but it’s actually based on a real-life investigation Laier launched, involving her own family, in an attempt to figure out what in the heck happened in their lives when she was younger.

Interestingly enough, Cosmic Top Secret was burned out of Trine’s graduation assignment from the National Film School of Denmark. The school and staff were impressed in such a way that they pushed Later to turn it into an interactive adventure and funded the entirety of the project, which leads us to the final title we have now.

The game finds you navigating a confusing and slightly terrifying hellscape of design decisions, ranging from paths that resemble dominoes to training grounds, paths comprised of roadmaps, and, well, nothingness. The character models, while exploring a 3D plane, are all 2D, much like you’d see in games like PaRappa the Rapper. And there’s plenty of nonsense spouted by the various characters you come across while trying to make sense of things at nearly every corner. 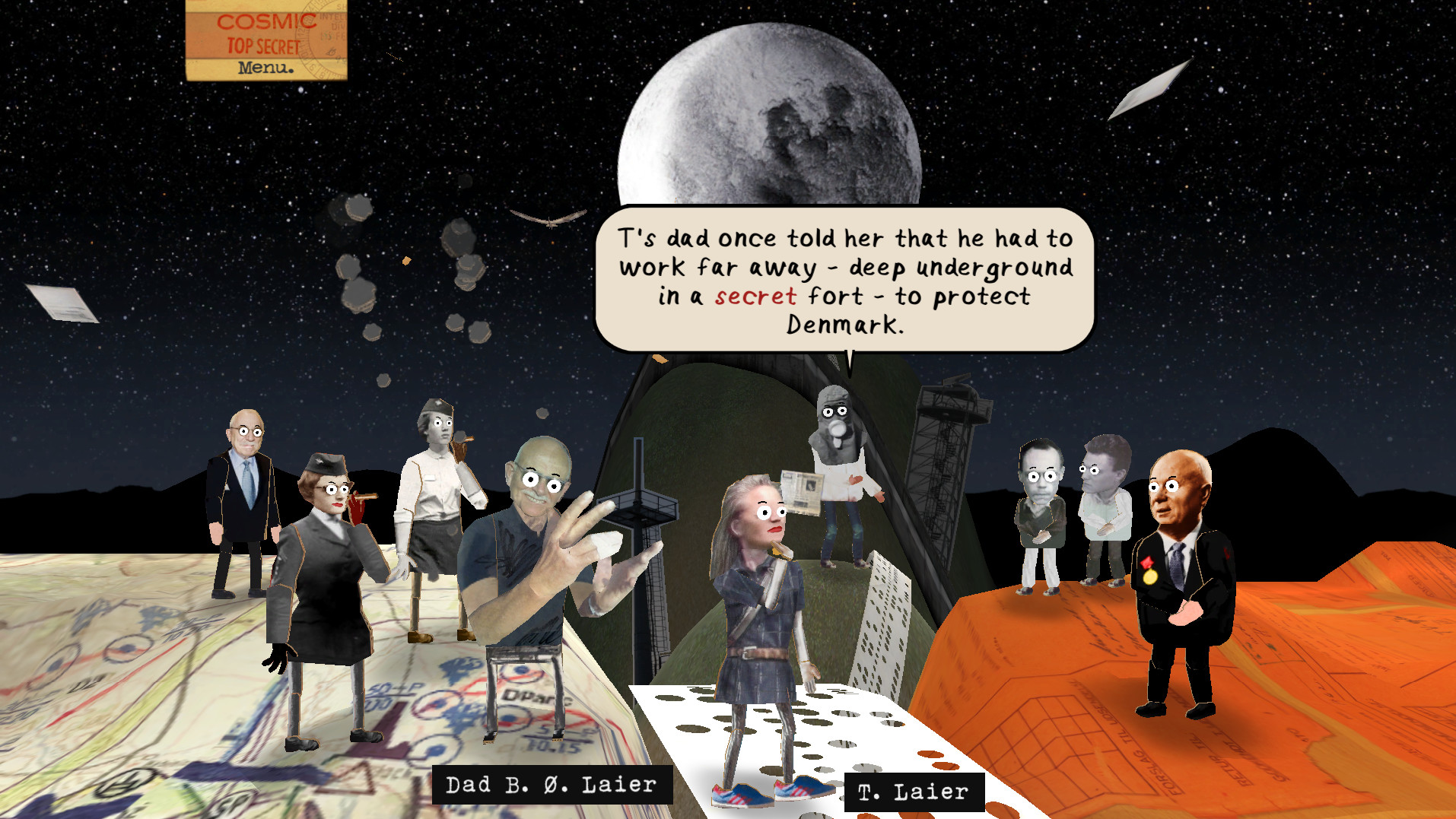 Occasionally, things can get very confusing as you make your way through the oddly-coloured worlds on a scavenger hunt for various ‘sections’ and items you need to complete the game. There’s little direction when it comes to telling you where to go next, which some may take as part of the fun, though others might be put off as it simply being confusing for the sake of being strange.

The world is comprised entirely of papercraft characters with photorealistic designs and a pair of googly eyes drawn on for good measure. Every single thing about it is deliberately weird, from the disembodied arm you use as a cursor in the menus to each area’s decor. It’s glorious and stupendously weird.

Perhaps the weirdest thing about it, beyond its clever and deliciously impressive take on surrealism though, is the game’s disclaimer that it contains ‘authentic’ materials that Trine and Klassefilm have official security clearance to use. It contains ‘undocumented and unauthentic’ material too, the game reminds you, but the idea that you’re navigating real documents and Trine’s real-world investigation into her parents’ potential double lives as spies is a real trip. 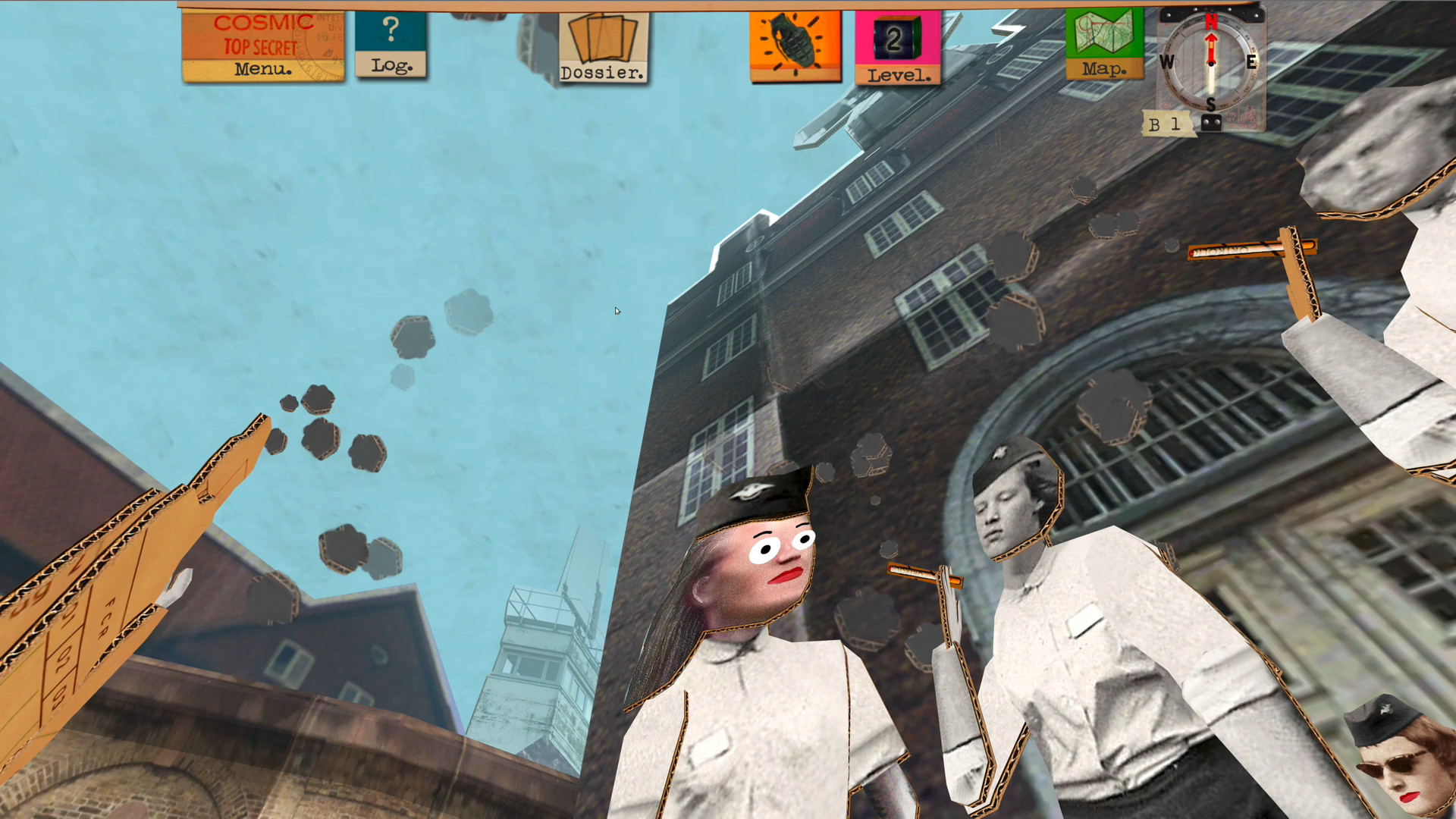 As T, you interact with the world in a number of ways, such as crumpling yourself into a paper ball and rolling around, just as Metroid’s Samus Aran would with her Morph Ball form. You’re thrust into a 3D environment to explore, with a variety of objectives and items to collect in the world around you. There are hidden objects in each level to collect that unlock additional pieces of the overall puzzle that you can find, such as a snippet of a coded printout meant to help crack the code.

Occasionally, controlling the camera and T herself can be a bit wonky as you navigate the more open parts of the level, and I did experience some slowdown at certain points, which seemed to clear up more as the game went on further. 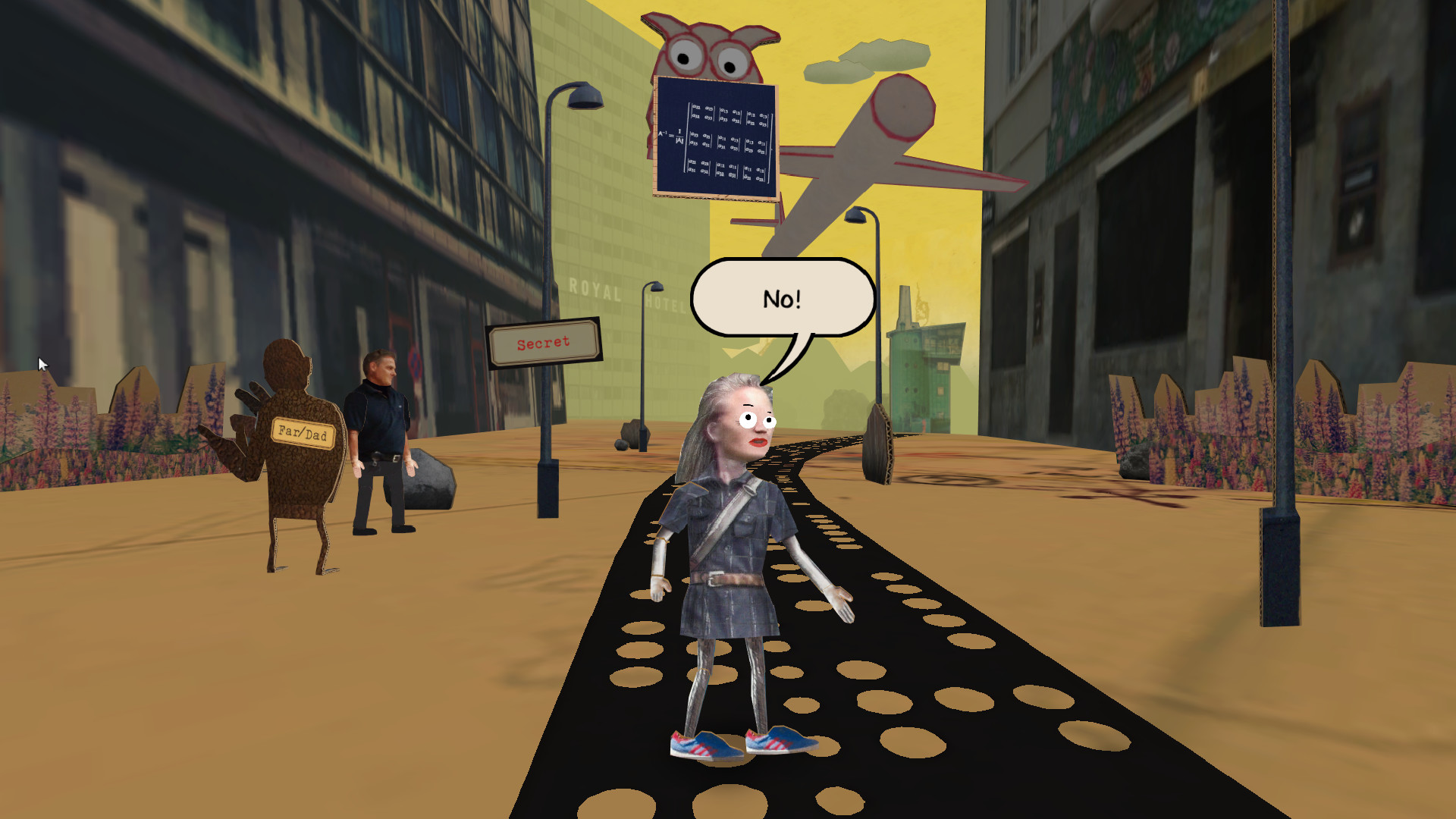 The cut scenes are especially bizarre, splicing together archival footage, photos, and real-life interviews like some kind of strange ransom note, but they’re especially enlightening. It’s strange and a little off-putting to hear voiced dialogue that hasn’t all been scripted, but it lends an authentic quality to the game, despite the fact that you’ll be relying on subtitles to get through the narrative. You can tell something’s ‘real’ about the voices as they occasionally stumble and talk over each other, which I appreciated immensely.

Unfortunately, the experience doesn’t last long enough, as you’ll want to see much more of this spectacle of a game. And beyond its brief platforming and exploration segments, it’s arguably less of a game than it is an interactive look into one of the strangest family stories you’ll ever have the pleasure of deciphering.

Cosmic Top Secret certainly won’t all make sense, but that’s the fun of it – and if you come out of it on the other side, just know that you’ll probably never see anything like it again.