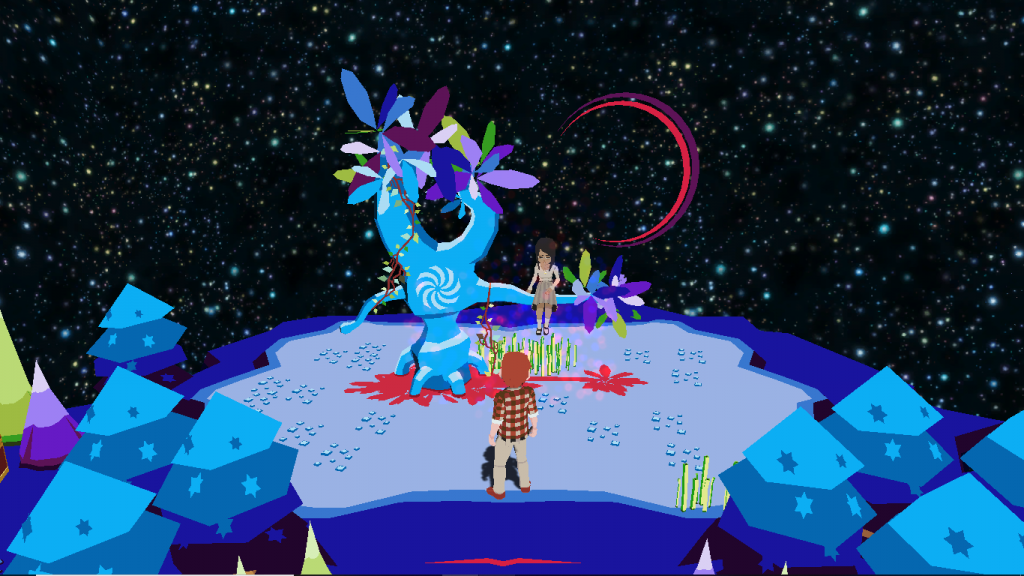 At one point in YIIK, Alex, the game’s protagonist, is sitting on a playground swing next to a girl that he’s been obsessively crushing on. I’m given a choice moment in which Alex can “kiss her” and I can’t click away from the option fast enough. In another scene shortly after in a burger joint, Alex and another friend, a male friend, sit across from one another, and I’m presented with a similar choice, but this time it says “try to kiss him.” I know the result before I press it, but I hold out hope that the game may be better than I think it is. It’s not. The friend is disgusted, and the two blow off the experience. Alex proceeds to crush on a robot for the rest of the game.

Let’s get the easy stuff out of the way: YIIK’s gameplay is an uninteresting mess. Its combat is unbearably monotonous, forcing players to mash buttons in the same sequences and patterns endlessly; its puzzles are obtuse, always necessitating that players guess blindly at each puzzle’s one, very narrow solution; and it has the most needlessly time-consuming level-up method that I’ve ever seen in a game. 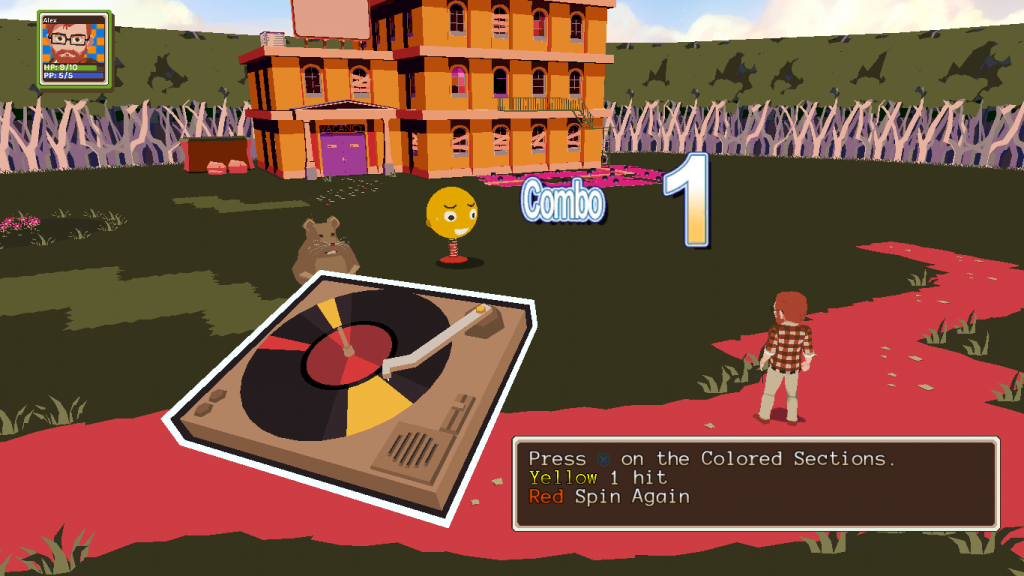 But let’s talk more about YIIK’s story, because that’s its core, and its gameplay mechanics rarely interact with its narrative in any meaningful way, instead often actively working against YIIK’s narrative intentions. For example, the story says that its protagonist is poor and he needs to get a job, but I’m over here making six figures killing some smiley faces.

YIIK may appear to tell the story of a party of characters, but its primary focus is its protagonist, Alex, and his friends’ stories are rather inconsequential. YIIK’s story revolves around Alex’s return home from college and his subsequent disillusionment as he attempts to find his place in his town, society, and the universe. 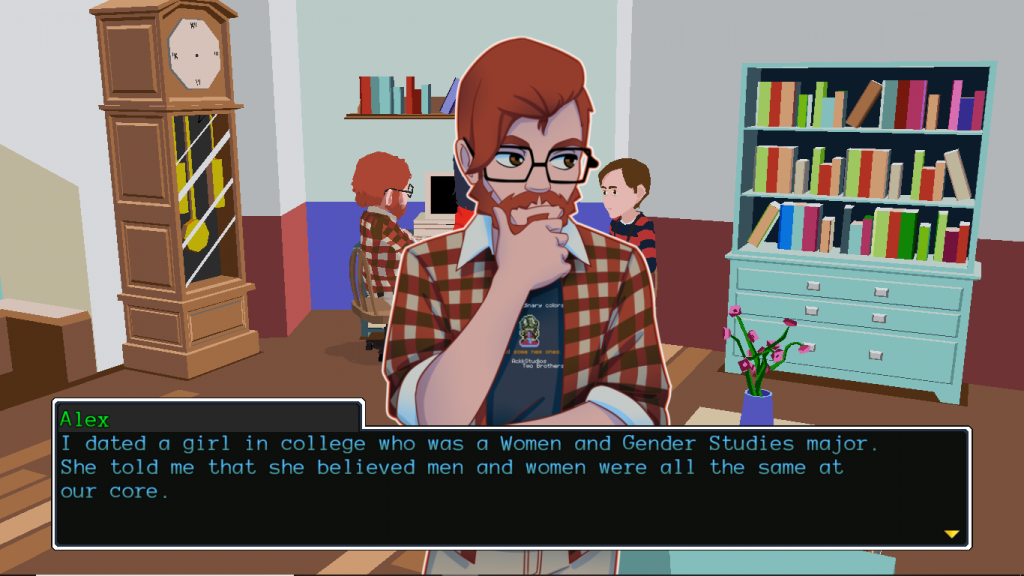 YIIK pours so much of its narrative energy into its very unlikable protagonist. Alex is misogynistic, homophobic, racist, and treats everyone around him terribly. Other characters do call him out, and I think he’s supposed to have changed—to have grown and become more self-aware—by the end of the game, but his development just isn’t convincing, and it’s certainly never earned.

Though he ostensibly grows to understand that he is privileged and self-centered, YIIK constantly reinforces that Alex is, literally, the center of the universe. YIIK’s developers really want you to like Alex, but I hated him. And I struggled to connect with any of YIIK’s other characters, because it’s unclear why any of them would choose to hang out with Alex.

Despite my many frustrations with YIIK and my hatred of Alex, I didn’t hate the game. There’s a heart to YIIK that’s difficult to dismiss. It’s obvious that the developers put a lot of themselves into it. In fact, part of my hatred of Alex is that I suspect there’s a bit too much of the developers in his character, but does that matter? Should I judge YIIK and its creators for their kinda-sorta Mary Sue? How harshly can I judge YIIK for Alex’s often cringing-inducing, horribly overwritten narration when I’ve overwritten dialogue before and sometimes still do? These messy questions of craft kept returning to me throughout YIIK, and I wish I had better answers. 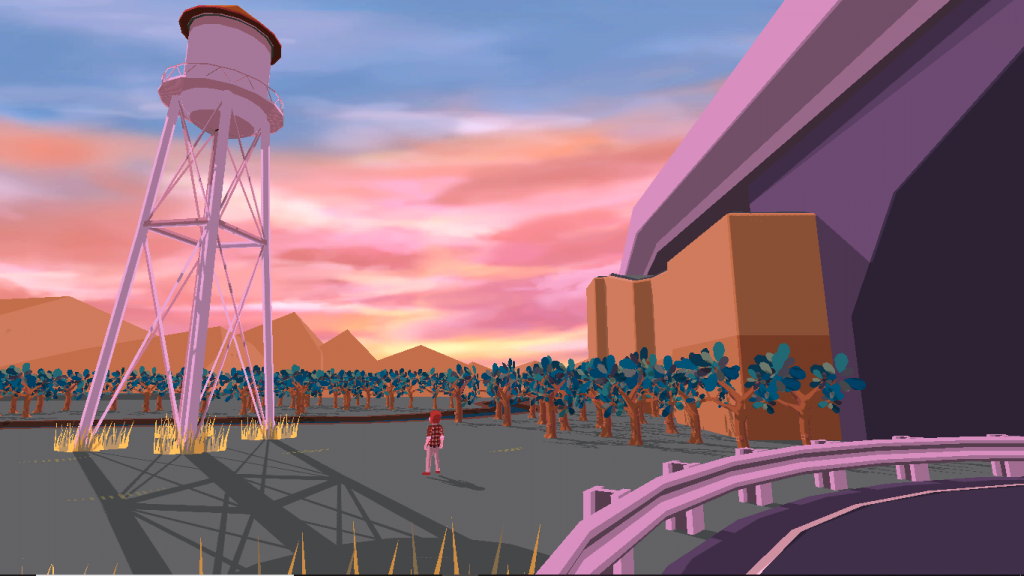 YIIK will undoubtedly be compared to a lot of games; its constant, often distracting, allusions to other games ensure that. The influence of games like Earthbound and Persona is overt—evident in the overworld and individual location presentation; its save mechanic in which its protagonist uses phones to call a mysterious figure; and its surreal, cosmic theming. Less obvious is YIIK’s relationship to more recent narrative-focused indies, specifically Night in the Woods.

On the surface, Night in the Woods and YIIK share similar narratives, both telling stories of disillusioned young adults, but Night in the Woods is significantly more successful. While it may seem unfair to compare YIIK to other games, YIIK’s constant nods and homages insist that players do so, and comparing YIIK to Night in the Woods helps illuminate where YIIK falters.

Where Night in the Woods’ protagonist, Mae, is flawed, she’s always likable and eminently relatable in ways that Alex is not. She’s a character that we rarely see in gaming while Alex is nearly every video game protagonist that’s ever existed, emotionally stunted and juvenile. The side characters in Night in the Woods are similarly more unique and nuanced than YIIK’s.

Finally, though Night in the Woods flirts with elements of the fantastical and often seems like it may veer into the supernatural, it remains grounded in the real, modern world, making its observations about class and responsibility more meaningful and tangible. By comparison, YIIK only pays lip-service to explorations of economics and adulthood, because its story ends up, literally, exploring the end of the universe, having little to no bearing on real-world issues. 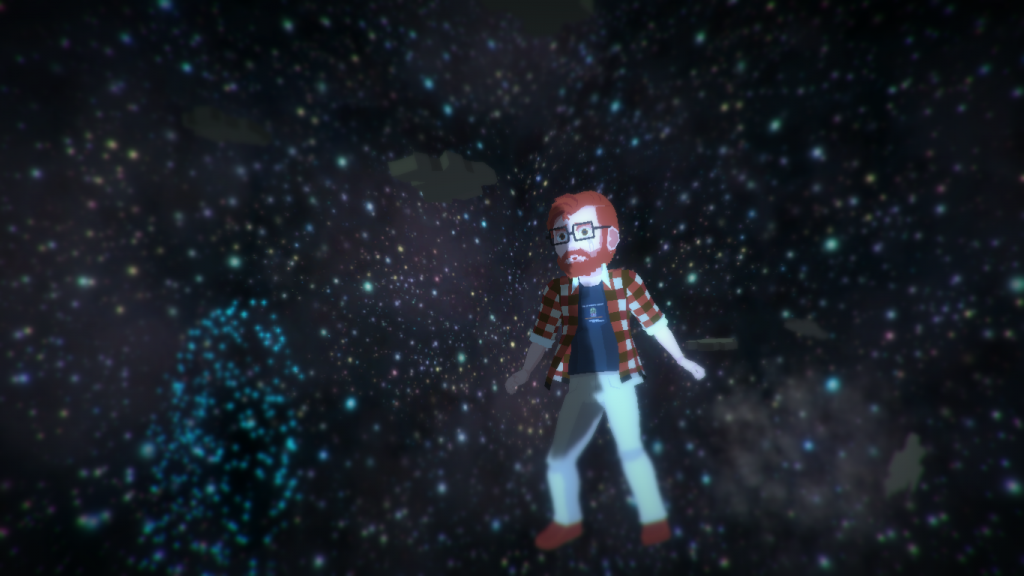 At times, YIIK’s story does contain exceptional observations about the human experience that are incredibly moving. While its disparate pieces struggle to satisfyingly coalesce, I don’t regret my time with the game, and its developers should be proud of their achievement. All games are a masterwork of hours upon hours of immense emotional and physical labor. YIIK made me recognize and appreciate that labor in ways that other games simply don’t.