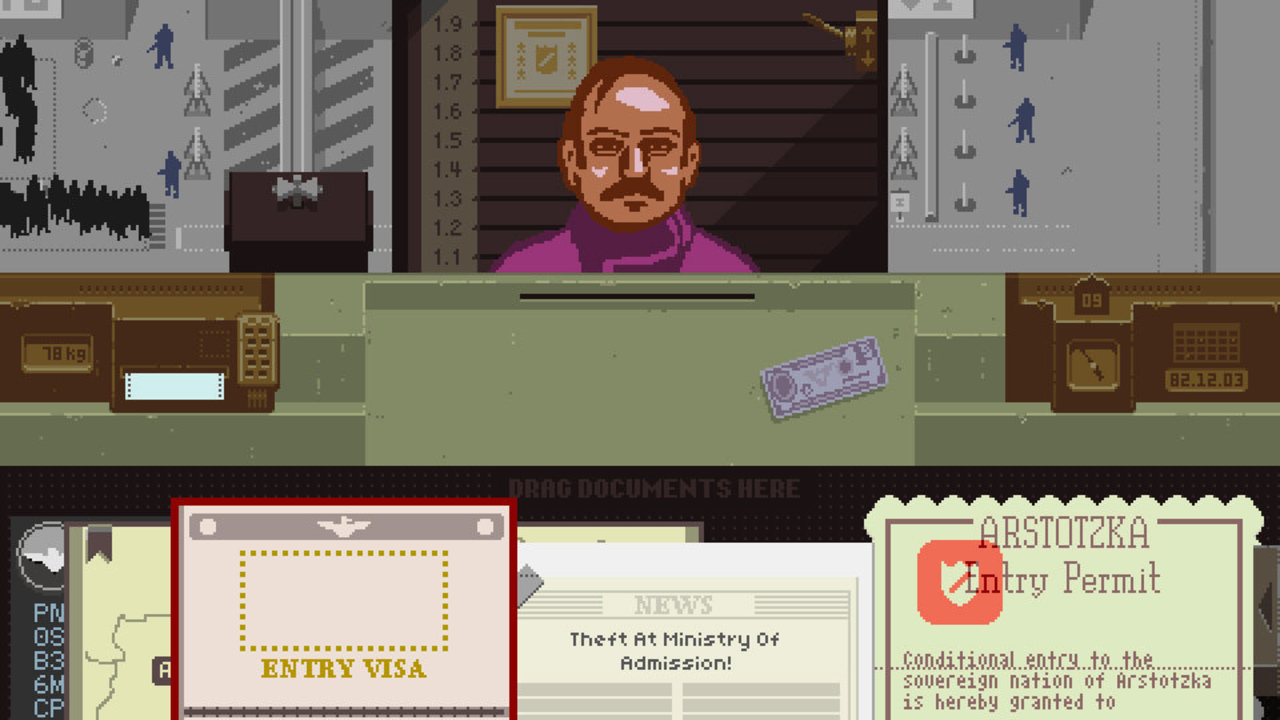 With games like Hellblade: Senua’s Sacrifice and Papers, Please entering the mainstream arena of gaming experiences, video games that enact positive social change are becoming more and more prevalent on our PCs and consoles. Games have moved on from entertaining escapisms to catalysts for tangible social impact, with indies leading the frontier with their smaller, personal experience-based games. Interactive fiction (and non-fiction) has woken up to its potential to provide deep insight into the worlds of others, a scope for empathy so necessary in today’s divided world.
One organisation championing the ability for games to enact real change is Games For Change. President Susanna Pollack explains, “Games For Change is a not for profit organisation that launched in 2004. Our vision is to empower game creators, game developers and other social innovators to use digital games to drive real world change.”
But why do games have such power for impact over written media, music, or film? And how are indies faring in this space?
One of video games’ defining characteristics is the agency they afford their audiences. A game with a positive social message has players enacting these messages themselves, modifying their in-game behaviour based on their surroundings, or player-character’s world view, and being held accountable for their own actions. Pollack describes how “there’s an immediacy in that that connects you to the material, and that’s true of all types of games, whether it’s narrative driven or a choose your own adventure.”
Such immediacy forces players to align their own world views with the situations and understandings of others, and assess their own response to an event or action. When players load up a video game they are literally putting themselves in someone else’s shoes in order to solve a problem they are facing, using only the tools they have at their disposal. These problems can range from the fantastical to the mundane, as Nina Freeman’s Beach Date shows. 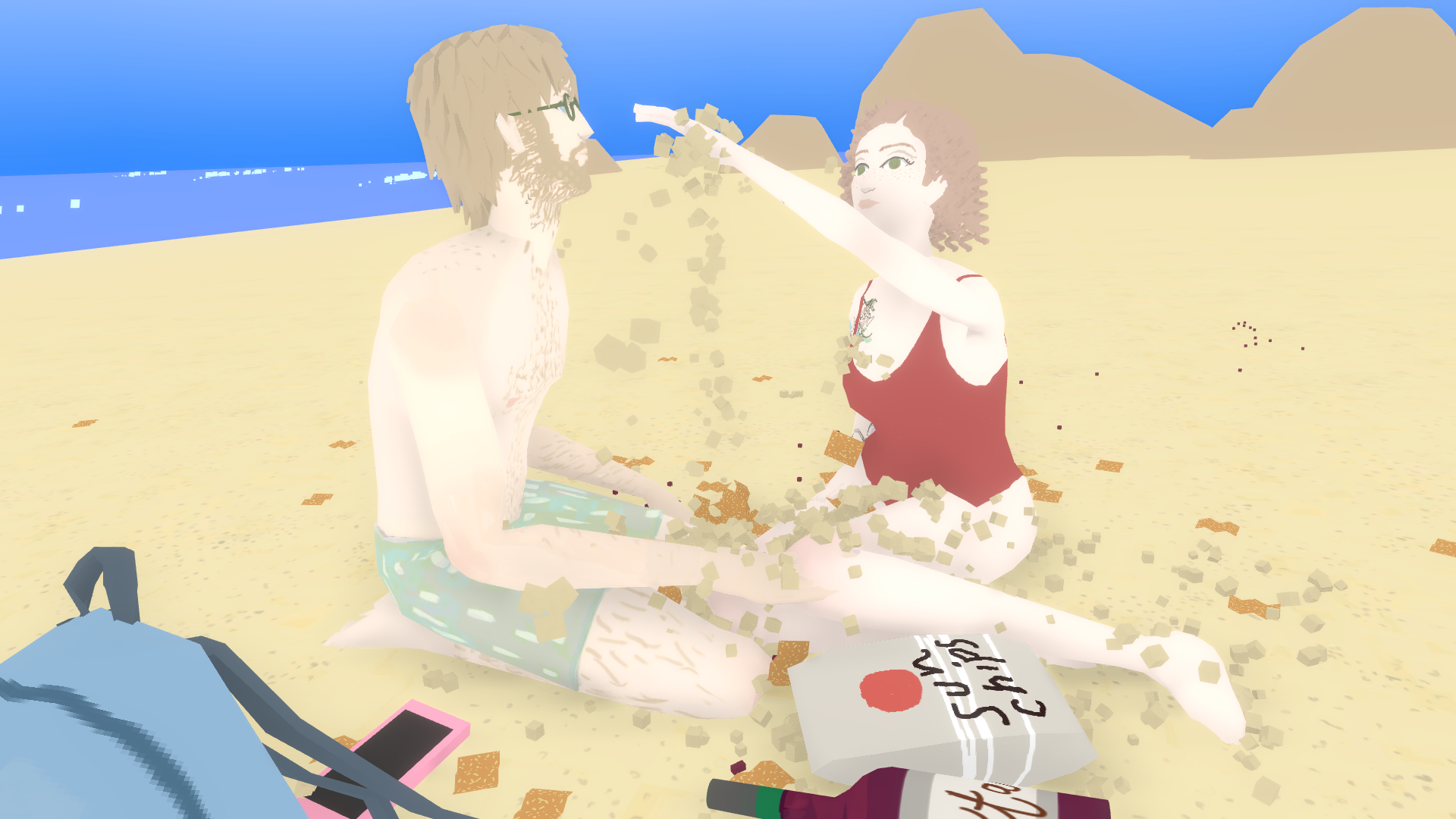 Beach Date takes players back to the everyday movements and actions that define relationships with and connections to people, places, and objects. Freeman revels in the everyday, explaining “it’s really interesting to see how you can get people to embody these ordinary daily life stories because games are really great at embodiment.” The short, vignette-style experience takes players through the experience of a young couple relaxing on the beach, the smallest of actions lulling you into someone else’s experience through minute acts of roleplay. The end result aligns players with their on-screen counterparts through these shared actions, the mundanity of fictionalised characters’ lives mirroring our own subtly, to the point where identification becomes seamless.
When a game truly masters this identification process, it can move beyond its own fictionalised world and into a player’s own understanding of their experiences. Susanna explains how “you’re able to roleplay and step in the shoes of characters and make decisions based on their understanding of the world. Fail along with them, help them learn, get the rewards and/or not getting the rewards and having to establish and built resilience and grit as you need to navigate this experience in order to achieve and move on.” Part of this alignment of understanding between the player and the player-character comes from the narrative, mechanics, and flow of a game.
The combination of narrative and mechanics and the flow result they work together to create, cannot be achieved in other mediums. Keeping users engaged with a message of impact or change is no easy task, and yet gamers regularly find themselves heavily invested in the story and world of their games through this flow phenomenon. Pollack concedes that “the relationship between the story, the character development as well as the game mechanics and your ability to create an experience that is challenging but not too hard, that empowers the player and excites them to want to continue when they’re in the flow place. All of that is hard to achieve”, but “when it’s done well it can have tremendous impact.”
Keeping users engaged with the messages at hand, and showing them unique ways of experiencing these messages can be incredibly powerful. Take Blind, from Fellow Traveller, a game that plunges players into darkness, living the experience of being blind. The use of mechanics and narrative bundled together in this immersive virtual reality game means players aren’t simply learning about the blind protagonist’s experience, but enacting it themselves. The emotions and anxiety that arise from this title are all organic because they are stemming directly from the player themselves. 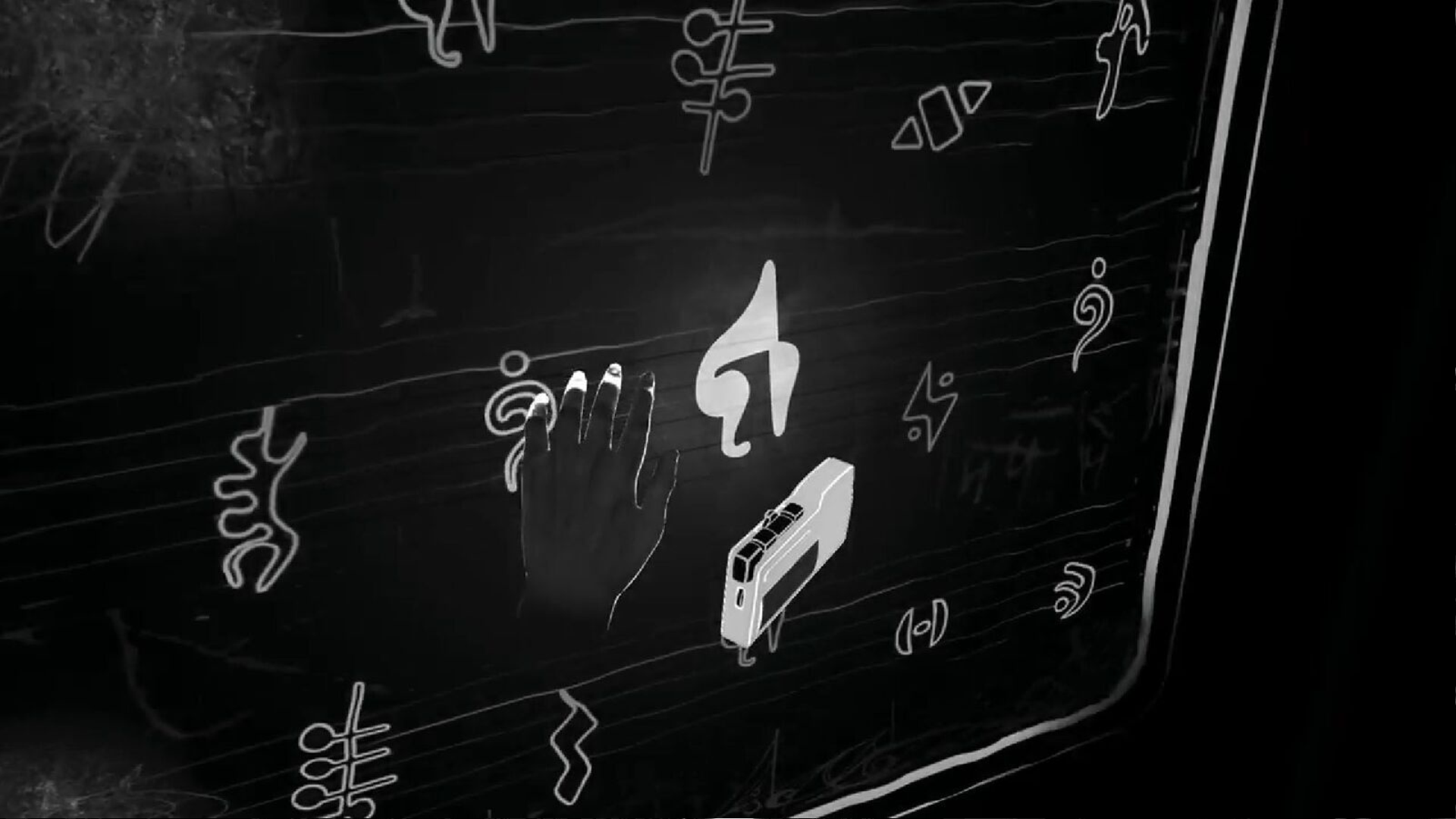 Beyond the structural characteristics of video games, player agency and narrative intertwined with unique mechanics, the technology running these experiences are also amazing catalysts for empathy. When the Games For Change Festival began, Susanna Pollack recalls how “we realised there was such a growth of activity in the VR sector, and not just in games that are made in VR but also in experiences that are made in VR.”
Beyond virtual reality, Pollack explains how mixed and augmented reality became tools for driving change, and just how effective those tools can be. “It allows one to see your environment as well as the images that are projected into your line of vision. So, there is this grounding that happens by bringing both the virtual and real world together. So imagine if you were having an augmented reality experience with someone from another culture but you’re seeing them in your environment, you’re having a dialogue in that environment. Or, you’re able to put an emotional scene within your actual living room, whether you’re dealing with domestic violence, or you’re learning about seeing the world through the eyes of someone who’s autistic or people with degenerative diseases. It connects the virtual environment with your real environment, so I think that this helps you make that leap into making those connections.”
Project Crisis Plan is an upcoming experience developed by Reddlock Studios, in which they aim to simulate a terrorist crisis in a digitalised Dutch cities. Those taking part will learn how to deal with the situation through freely exploring and interacting with the digital world they find themselves in. Or, consider Zombies, Run! an independent exergame that takes real-world exercise and augments it with the narrative and mechanics of a zombie survival game with the aim of motivating and engaging couch-to-5k-ers. Beyond a personal empathetic level, the technologies being employed across gaming are also being used to gamify education, personal and social change, and growth.
So what can indies do in this space and why should they be primed for action?
Indies are already situationally positioned to create the smaller, more personal games that yield high impact when done correctly. Mike Bithell describes the origin of Subsurface Circular as one of financial and creative freedom: “What happens when you’re not putting a massive financial risk in something is you can take a massive creative risk. The only limit here is how brave I want to be with my idea.” Indie developers all over are able to create games untempered by marketing requirements, fulfilling needs of smaller audiences and portraying the messages that would have otherwise been understated in the mainstream. 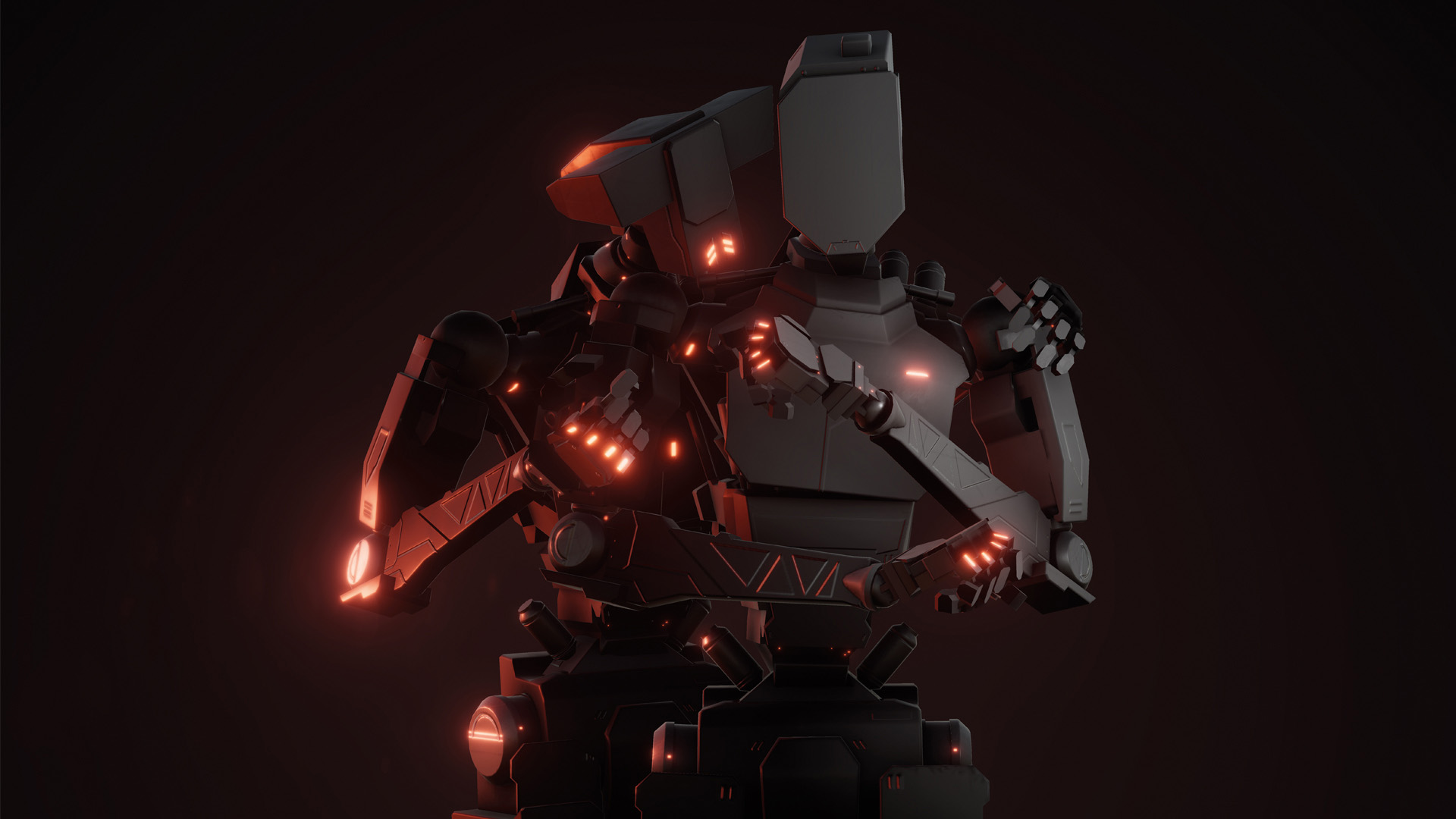 Beyond this scope for creative risk, Pollack highlights another draw of indie personal creation: “I think that there is an indie game genre that is burgeoning already that’s not necessarily impact driven,” she explains, “it’s creator-driven. It’s a creator’s vision, whether it’s artistic or it’s a type of gameplay.” Independent developers are free to tell their own stories in the ways they want to. Nina Freeman explores her personal everyday through experiences that wouldn’t be considered commercially viable for triple-A studios and Mike Bithell is able to put his auteurist creations in front of millions of players.
A community has already formed around these positive social impact games, as evidenced by the annual Games For Change Festival which brings developers, speakers, and players together for a celebration of the latest creations. “It’s an opportunity for indie developers to learn more about the space,” Pollack explains. “June 17-19 is our annual festival, we’ll have one day focused specifically on XR for change and then two days on games for change.” The festival is split across three lines of thought: “one for exploring how games can be used to raise awareness around civic and social issues, another track on how games are used in education, and the third on health and wellness, how games can be used to advance emotional wellbeing, rehabilitation, treating mental illness, cognitive development.” 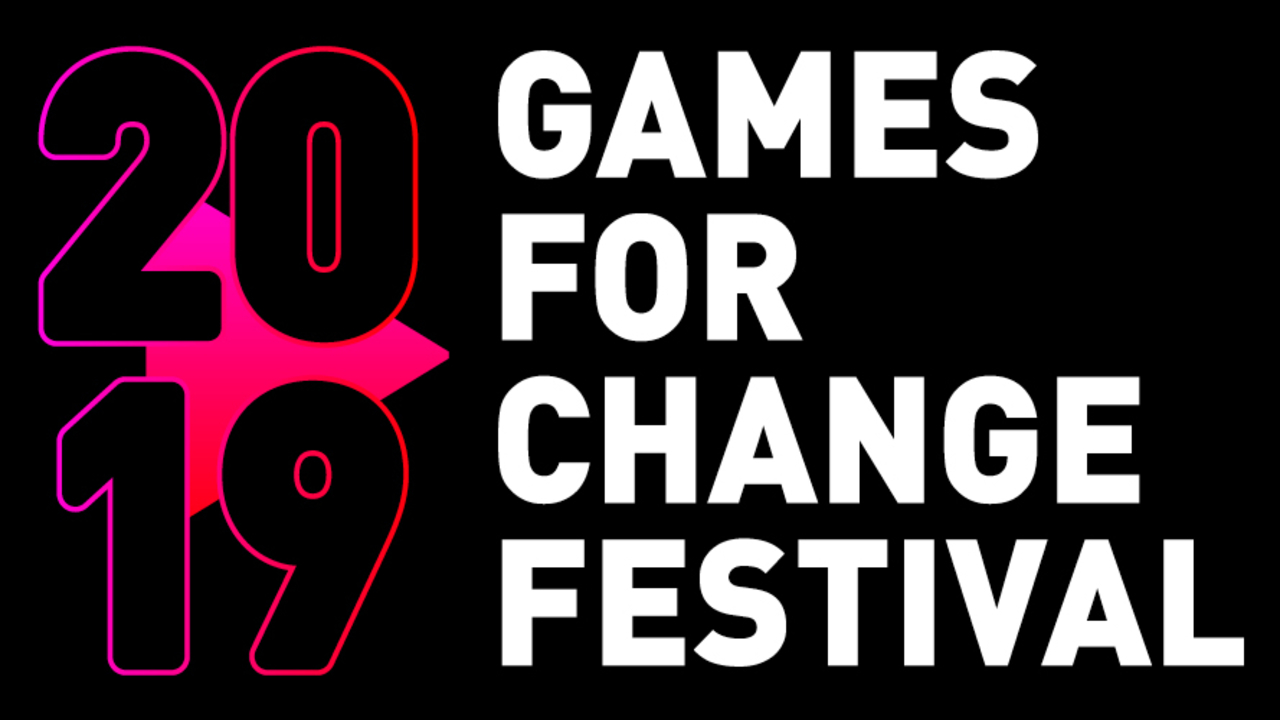 If you want to check out more about how Games For Change and associated developers are working toward a world in which games are used alongside textbooks, instructional courses, and experiences check out the Games For Change website. “In addition to the resources we have on our website and all the great games that are available in our arcade, we also have links to all the fabulous talks that have been present at past Games For Change festivals,” Pollack explains.
Categories
FeaturedFeatures
Tagged
Beach DateBlindGames For ChangeMike Bithell