Blacksad: Under The Skin Review

Not feline so great. 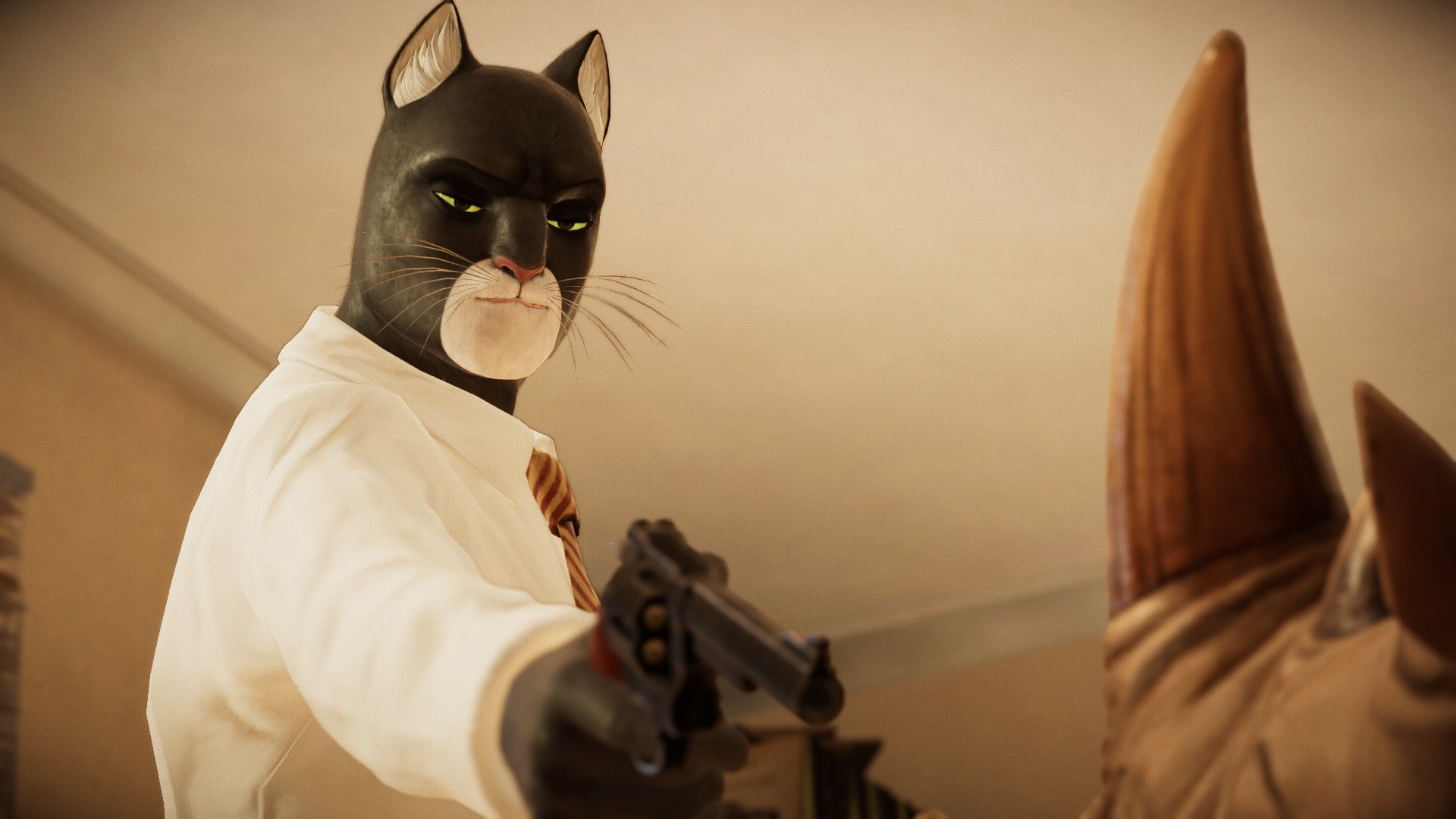 Except for the fact of being a cat, John Blacksad is the prototypical hard-boiled detective: he smokes too much, demons and regrets haunt his dreams, and he’s always one job away from destitution. Despite all that, he’s good at his job and has a knack for uncovering dirty secrets. Piercing green cat eyes and a pair of pointed ears certainly help.

Blacksad: Under the Skin is an ambitious attempt to adapt a nearly two-decades-old comic into an interactive experience. Spanish developer Pendulo Studios decided to craft a story independent from the graphic novel’s five published volumes while hewing close to established characters, tone, and themes. The story is often dark, punctuated by acts of violence and betrayal. But spots of biting, sarcastic humor keep it from running too dour. 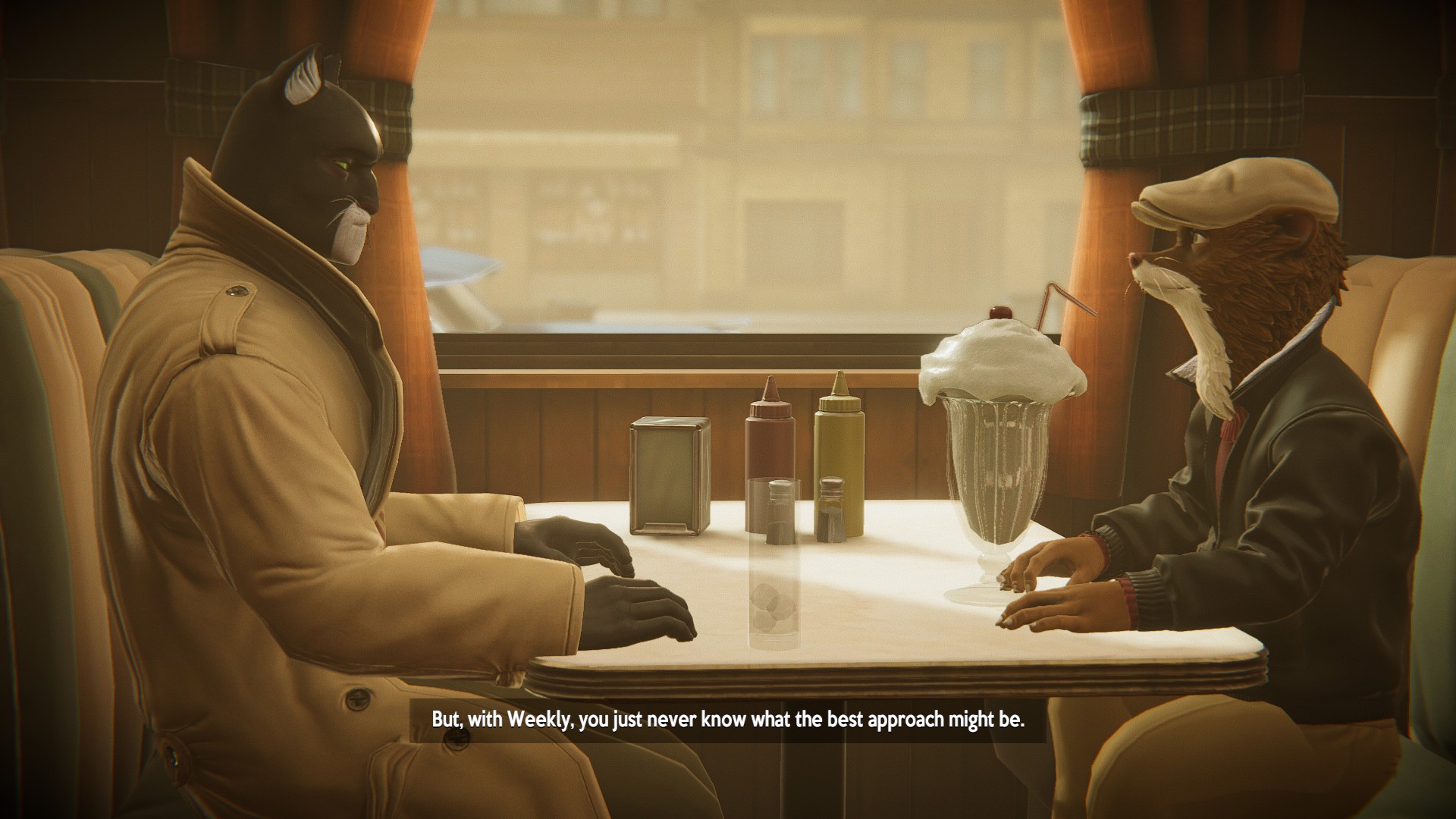 The result is a deliciously pulpy story, but one unfortunately weighed down by a distracting number of audio bugs and general lack of polish. Early sections of the game sing, but the more I played of Blacksad’s 10-hour length, the more often I ran into missing/repeating/misplaced dialog, clipping during cutscenes, and unfinished textures.

A constant example came from the facial animation of the anthropomorphic creatures inhabiting this mid-1950s New York City. The titular Blacksad looks incredible – it’s obvious the team invested special attention making sure he always emoted clean and smooth. Many other faces didn’t measure up, clipping through themselves or feeling all too wooden. This might not have been a problem were intimate character interactions not a key part of the game. It’s difficult not to notice the disparity between models during extended conversations. 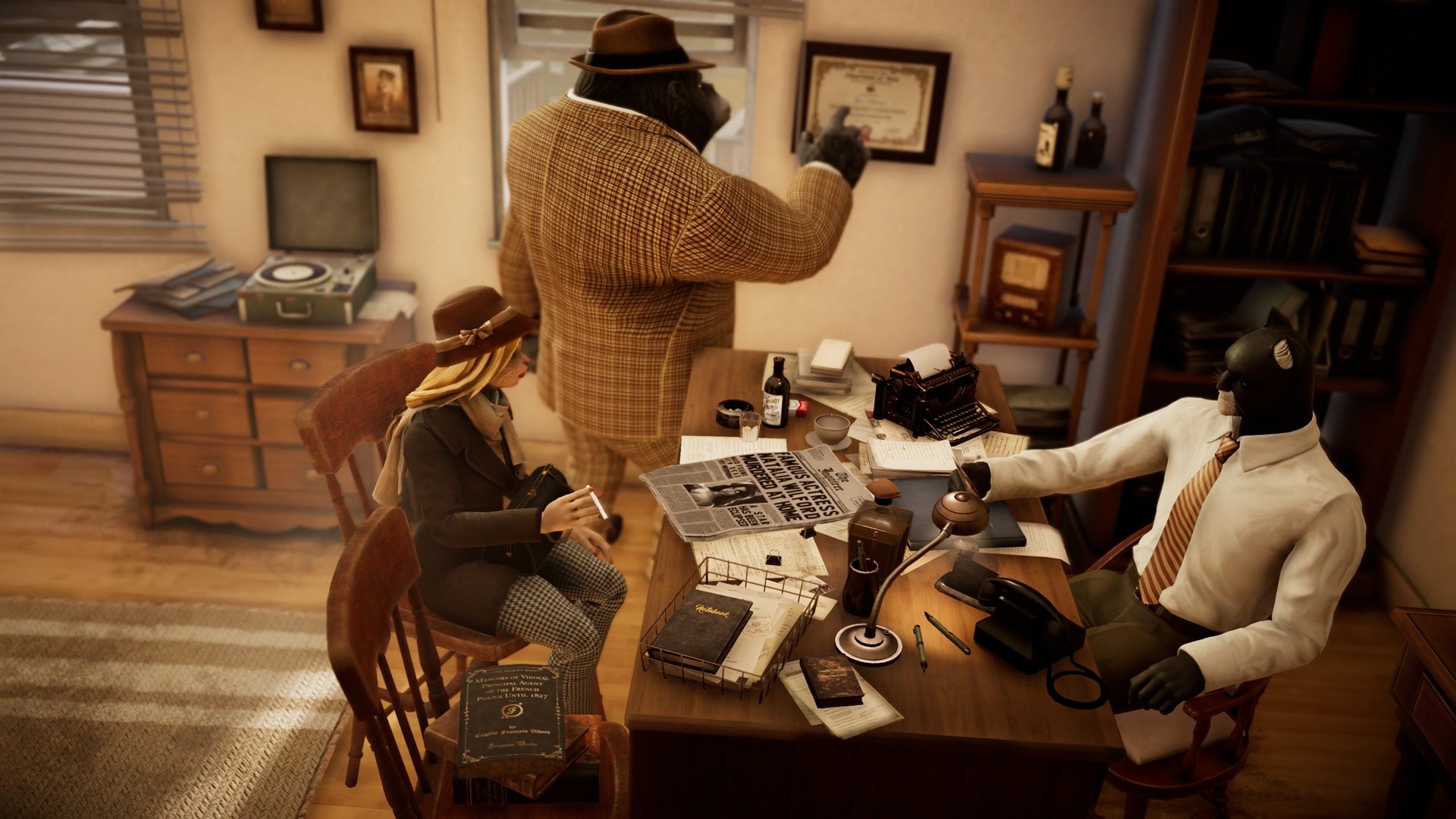 Environments, too, suffer from mismatched quality. Locations such as the boxing gym of the recently departed Joe Dunn or Sam’s Diner just down the street show off an impressive approximation of the comic’s watercolor and hard lines aesthetic. Later locations can’t help but feel rushed or unfinished with haphazard clutter and untextured surfaces glaring beneath it all. It’s difficult not to wonder if the developers had their backs pushed against hard deadlines. Pendulo has said a technical bug allowed an unfinished version of the game to release early on PS4 and Xbox One, while the Switch version has been delayed.

Another potential strength of Blacksad was its voice acting. Barry Johnson (Detroit: Become Human, Beyond: Two Souls) delivers a gruff and raspy Blacksad who can be believably empathetic and sarcastic in the same scene. The supporting cast, from Police Commissioner Smirnov to Dunn’s distant daughter Sonia to Weekly, a weasel reporter with a nose for trouble, play off Johnson well in their shared scenes. 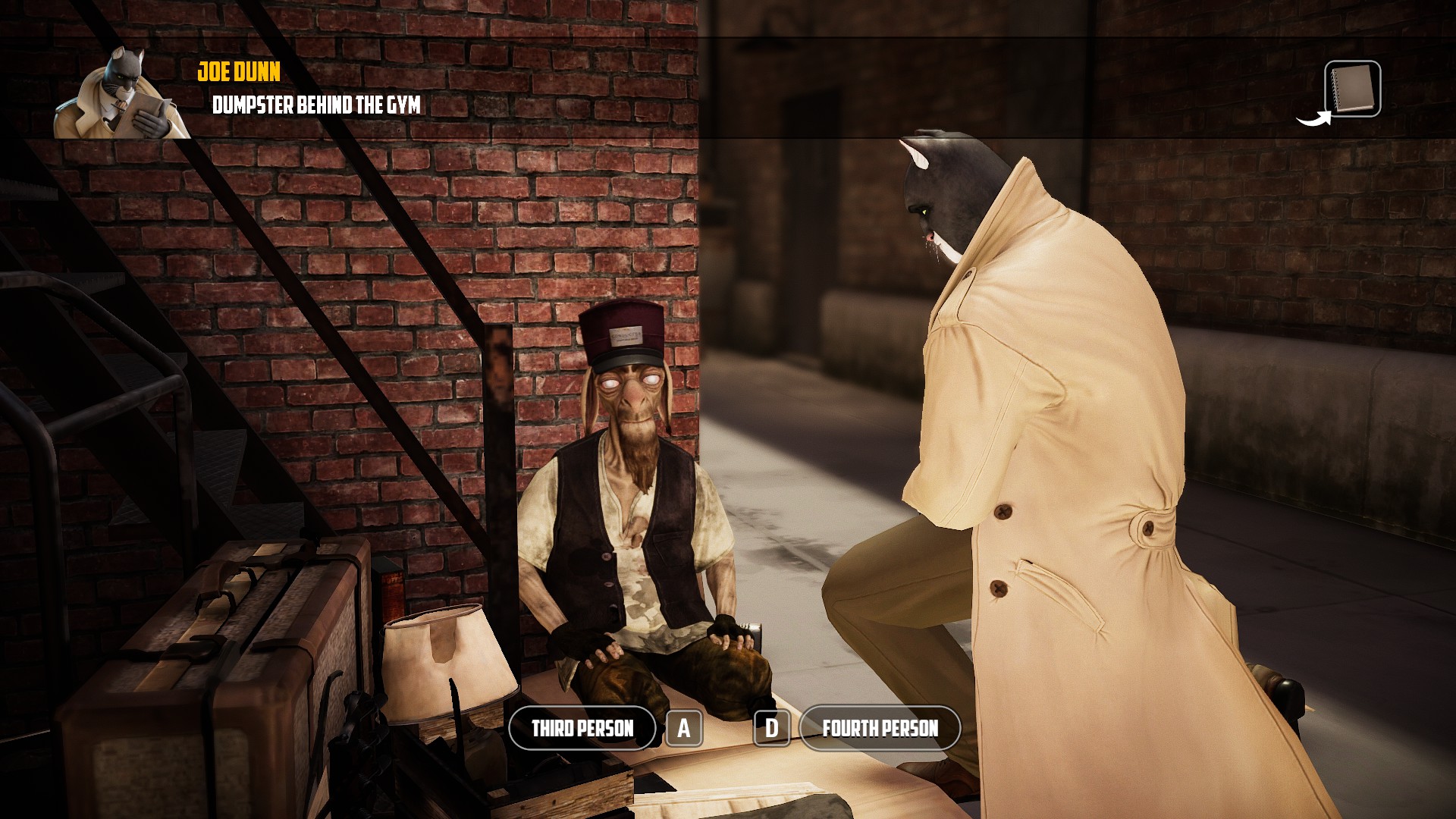 But like so much else in Under the Skin, technical fumbles squander what they brought to the table. Character tracks overpower in the audio mix, which led me to spend thirty minutes in the options thinking I had somehow mucked up the settings on my own. Trust me: a death scene loses its gravitas when Blacksad’s labored, mournful breathing rides roughshod over everything else, even as the scene fades to black.

All of this is so frustrating because I desperately want to like the experience of playing Blacksad: Under the Skin. Newcomers to detective fiction will be delighted by the genre’s panache for indulging in brevity and violence, while old hats can marvel at the ways Pendulo managed to fit it inside a video game. 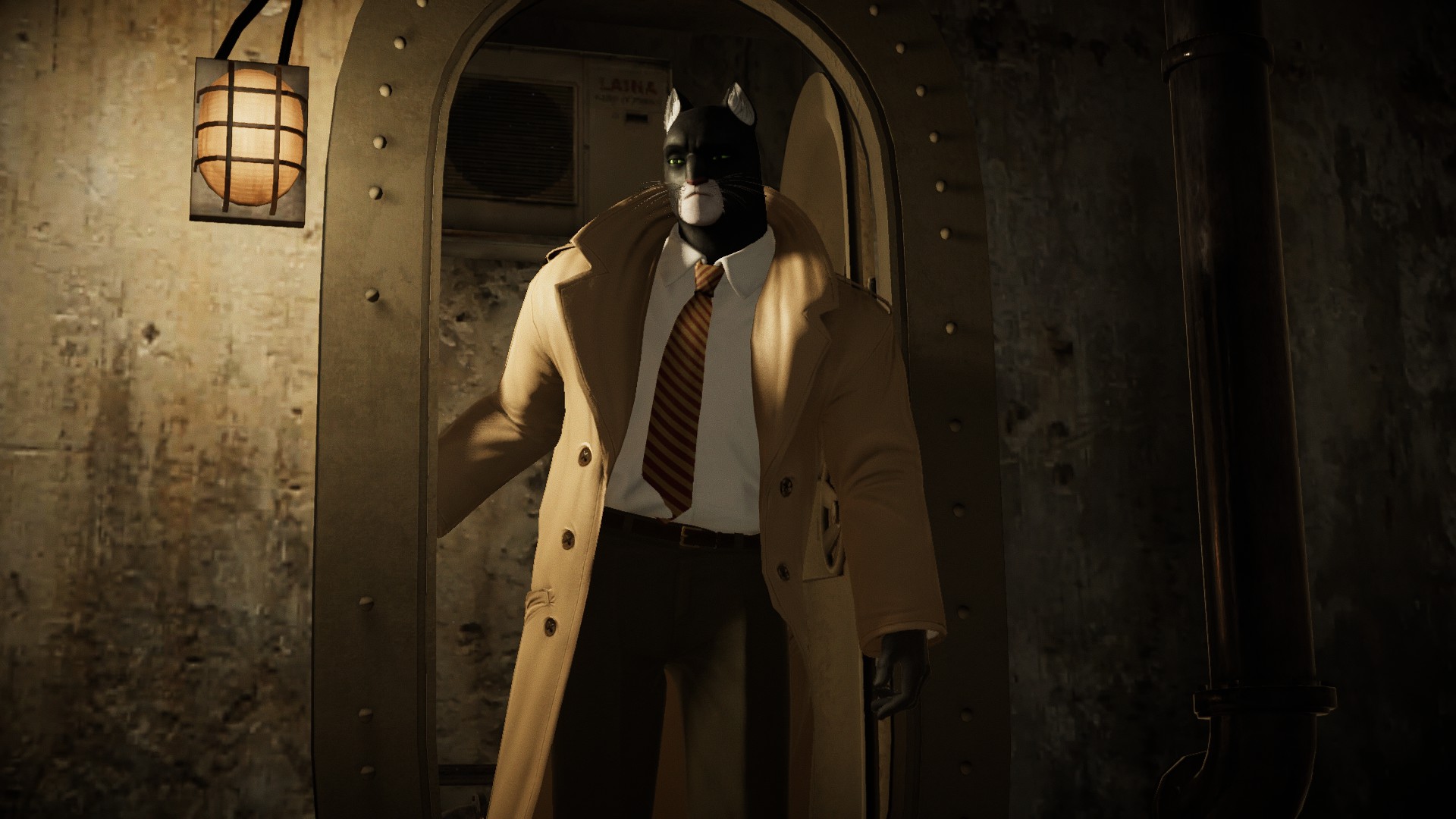 My favorite section involves Blacksad sneaking into a poker game by impersonating a Texas gambling tycoon. In order to bluff his way in, the game continually cuts back to the night before, where our intrepid gumshoe just so happened to uncover the vital clue. Players are on a timer, keeping the tension alive while they scramble to uncover the password for the door guard or learn a mannerism that will sell their assumed persona.

The game bookends dialogue-heavy scenes with open investigation, letting Blacksad loose in an environment to gather clues and make deductions. The latter is gamified inside his mind, where players must piece together statements to uncover a fresh logical conclusion. Some of these progress the main story, while others might be completely missed if you are diligent enough. The result is a largely satisfying mechanic that rewards thorough searching. 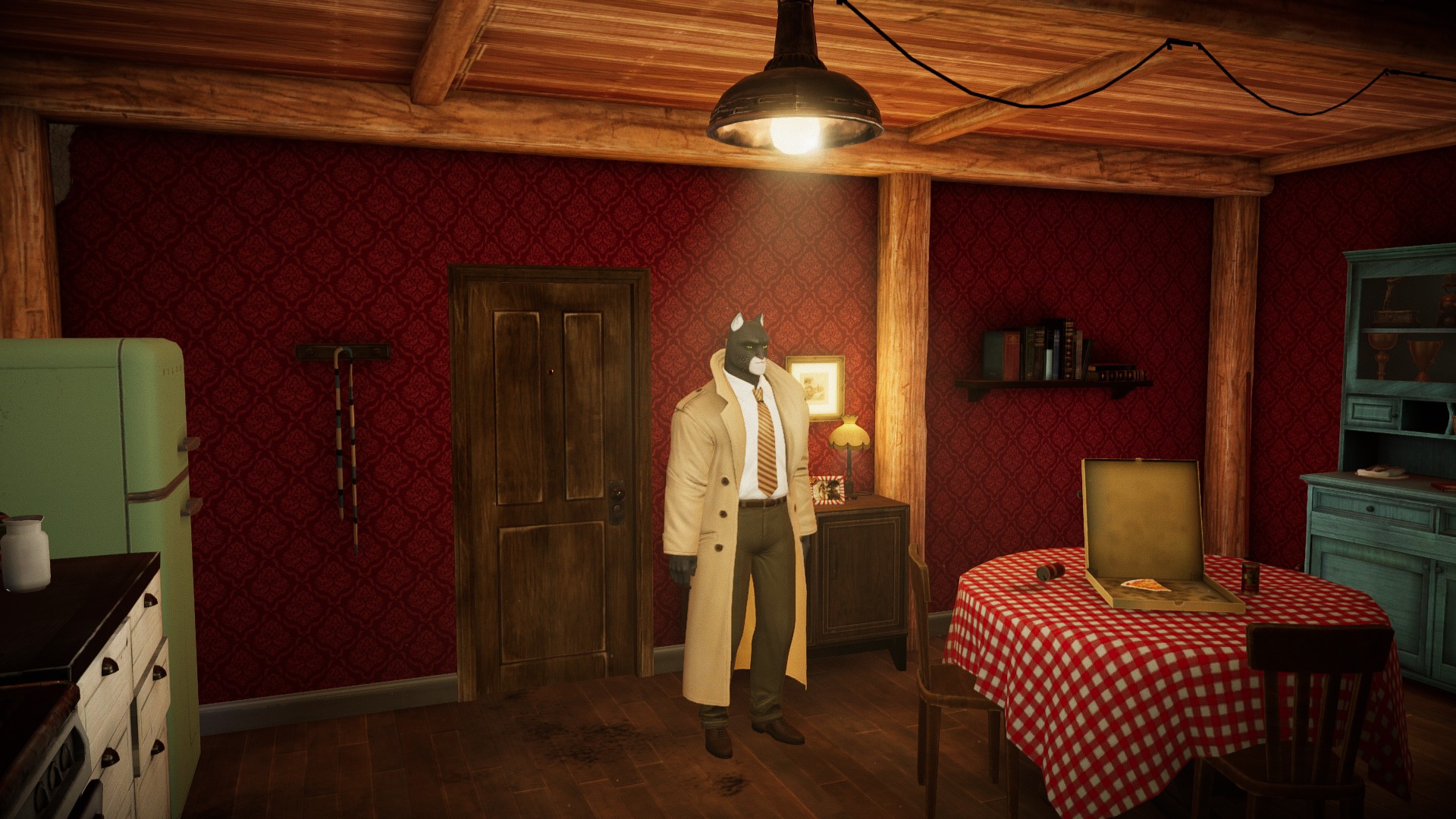 Under the Skin follows in the tradition of other adventure games by deploying quicktime events and button mashing during action cutscenes. I’m not immediately opposed to them, but I desperately wished Pendulo had leavened their use. One rooftop scrap quickly turned tedious because failing even one of a series of eight or nine QTEs sent me back to the very beginning.

The sad reality of Blacksad: Under the Skin is that almost every positive of the game must be qualified in some way. The ambitious adaptation shines in its narrative and voice acting, but both suffer under seemingly rushed implementation and editing. Its marquis gameplay mechanics keep players engaged up until they become tedious roadblocks that disrupt flow.

Fans of the graphic novels may very well be able to stomach the flaws in Blacksad: Under The Skin, but I worry curious newcomers will find the experiential cost of entry too much to stomach.

Make Your Own Museum In Dinosaur Fossil Hunter

The Procession to Calvary Review

Mount And Blade 2 Tips And Tricks