It’s been over a decade since Amnesia: The Dark Descent had us castle rambling and light source scrambling, and Frictional Games must be intimately aware of the horror legacy they birthed in 2010. Scratch that, they are – I’ve read the interviews. Not only do we owe a decade of first-person horror innovation to the landmark release, but you could say the whole modern landscape of YouTube and streaming entertainment evolved from the protozoa of user reactions to the game. Call that a second horror legacy, if you will.

Well, time has seen fit to transplant us all into 2020 where even P.T. is becoming an old hat horror influence now. Those nights of playing The Dark Descent as the only Steam game in my library on a Macbook Air 2011 and trackpad are well and truly behind me. The natural question is ‘how has Amnesia been ‘rebirthed’ for 2020?’ I knew in my bones that at least part of the answer would be that it’s rebirthed in SOMA’s image, Frictional’s mid-decade release revelation.

I wouldn’t hesitate to call 2015’s SOMA my pick for all-time favourite. I’ve played it over two dozen times, and I find it intoxicating each and every time. Enough has been said about its existential horror. Still, it’s actually how its narrative plays out with an absurdist scenario that is fundamentally as beautiful as it is horrifying that makes it leaps and bounds better than almost anything else out there for me. A strong statement, I know.

Is it better to be remembered? 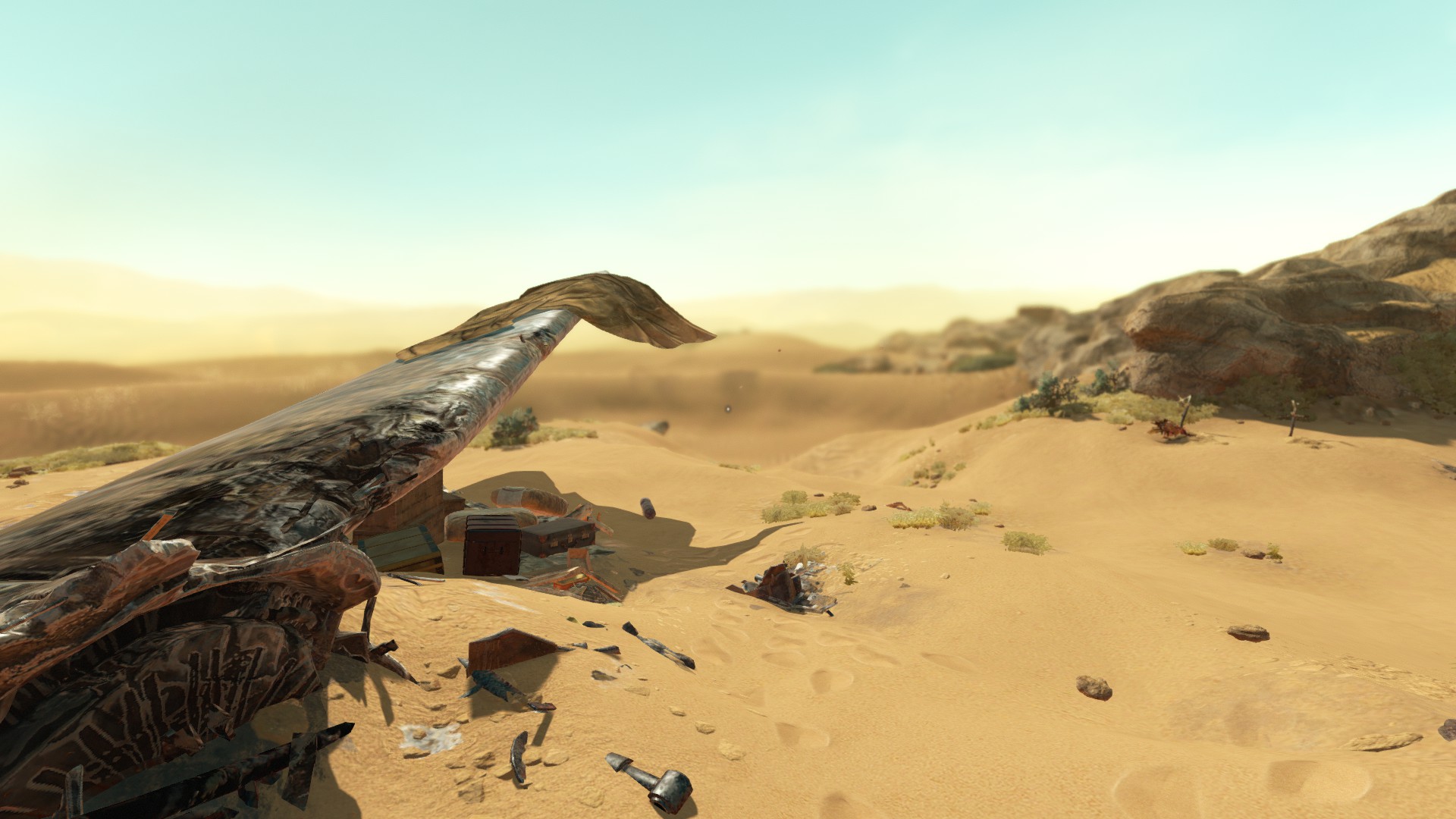 Rebirth too opts to be interesting. You know this the moment you step out of a plane wreckage into the blinding, bullying sun of the Algerian desert instead of a dark, claustrophobic corridor that is the mainstay of all horror games now. It doesn’t last long of course, but Rebirth uses the promise of a return to brilliant light to better pace proceedings with moments of respite. There’s certainly a tease with a one-off mechanic of having to seek the shade to escape the sun’s glare that they’d plumb the depths of this environment of its horror, but it’s hard to convey the horrors of searing heat on your skin and dehydration. It’s much easier to use such an environment to amplify feelings of isolation.

The most interesting aspect of Rebirth is revealed early on in the story, but I think I’ll keep tight-lipped about it regardless. It introduces a surprising mechanic that is surely a first for games and gives proceedings an emotional centre of mass rarely seen. It’s not only the first time it’s been done, but with competition, I think it would still rank the best.

The big question for me was what post-SOMA Amnesia narrative would look like. Was there anything it could explore as fundamental as the existential horror of that underwater pilgrimage? Yes, surprisingly. Rebirth thrives on its themes of pain and empire. It allows you to draw implications naturally yourself between its parallel stories. The way it threads grounded, personal stories with the more spectacular to find meaning is frankly unparalleled. The way it challenges your expectations of the environment means a lot of rich textual discourse will come out of Rebirth’s narrative, I hope. 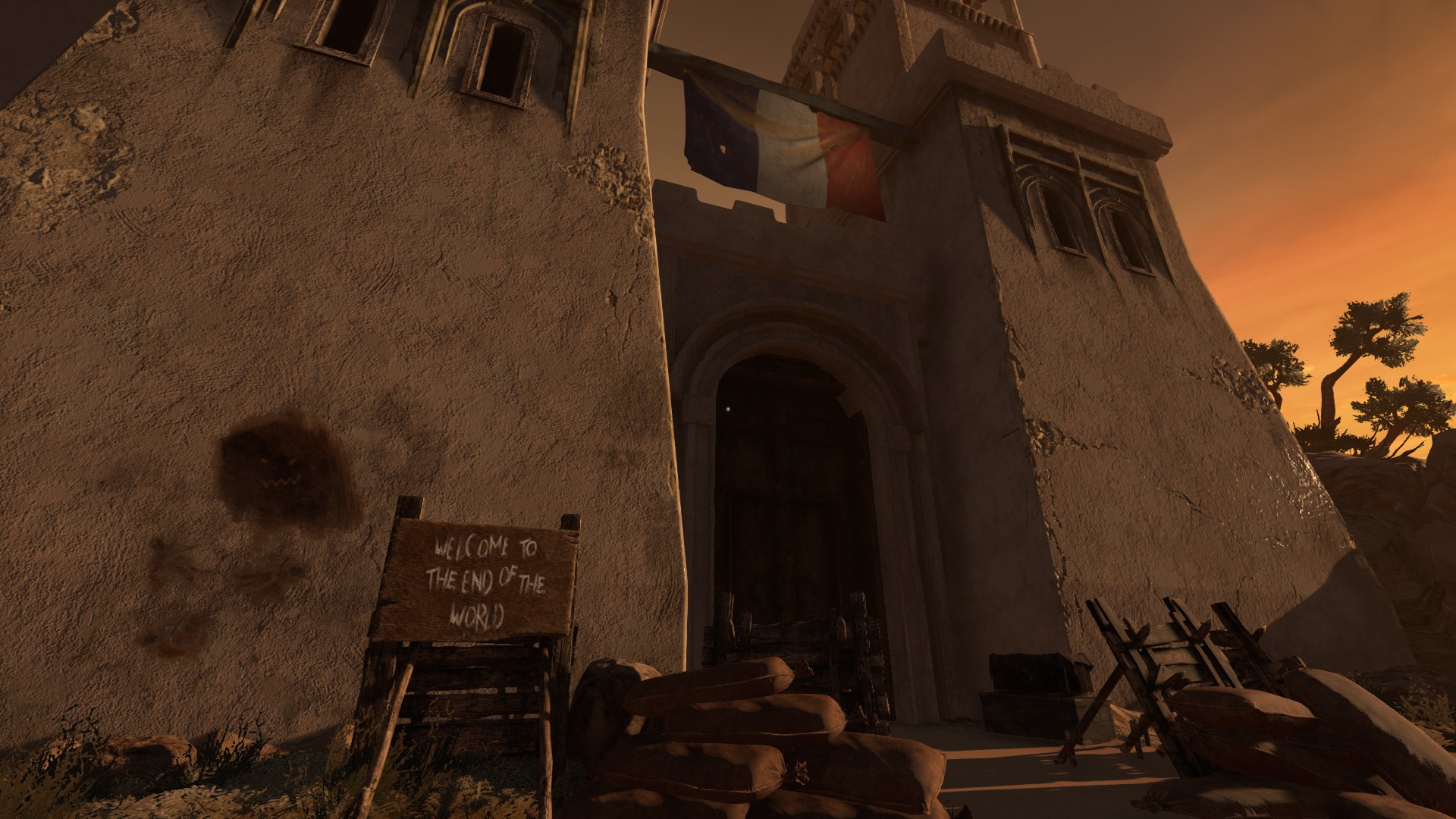 You play as Anastasie “Taxi” Trianon, an engineering drafter who wakes up alone in a plane with amnesia, of course, and an unknown affliction after she, her husband, and team crash land in the desert on their way to colonial French Sudan. It’s soon revealed she’s mysteriously retracing her own steps past the Kasbah walls, caves, and oases. If you’ve played The Dark Descent before you’ll know a bit of how this works. Periodically you’ll be interrupted by flashbacks, only this time you’re much more cleverly dynamically afforded them the moment you see something notable. Sometimes this even includes picking up an item or stumbling upon something off the beaten path. It’s a great incentive to explore.

What might be surprising to many just looking at it is how direct a sequel this really is. What I assumed would just be a narrative device, and musical callbacks in common actually builds a rich universe with The Dark Descent despite being officially ‘standalone.’ It’s the kind of world that has tiers of understanding. Many details are open to interpretation and yet open a wiki, and you’ll be assaulted with a hundred clarifications and intriguing lore. That might sound awful to some, but I found it rewarding. If your memories of The Dark Descent are as sketchy as mine, a replay either before or after is well worth it.

Rebirth has gorgeous environmental design and detail for the small core team it had, but it won’t blow you with its sheer fidelity. Many textures, particularly outside seem quite low resolution and there’s a hard 60 FPS cap for PC players. When Rebirth is able to better hide these deficits in the dark, it really comes into its own.

On the tip of my tongue 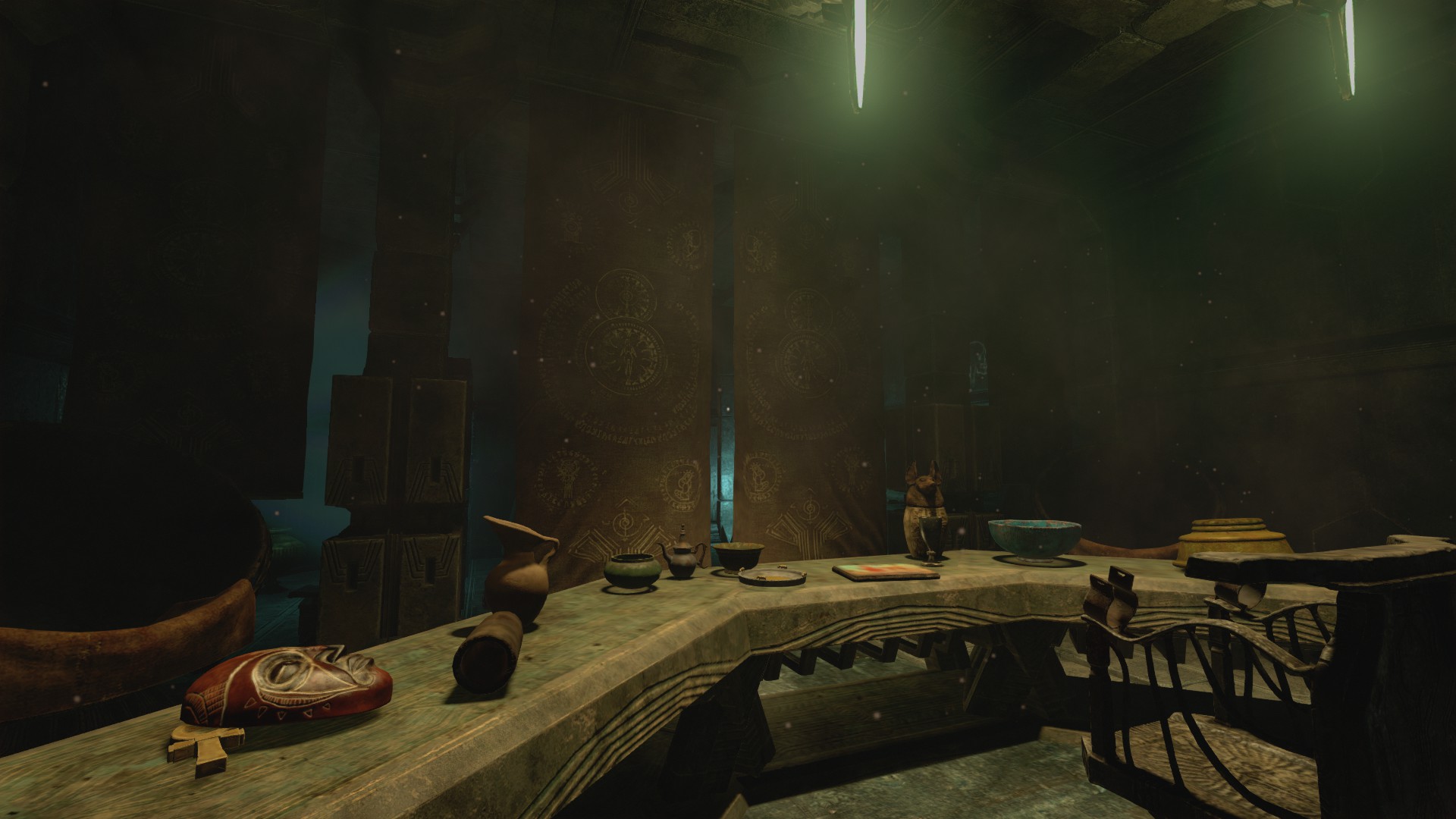 Where the game might invoke ire is for steering towards SOMA in its embrace of horror more so in narrative and world flavour over Dark Descent’s more successful stab at atmospheric unease. A replay of the latter still holds up, exposing you to both oppressive, thick darkness and sound design that renders you helplessly paranoid at all times. SOMA and Rebirth are both more interested in having their protagonists centrally involved in cinematic thrill ride with overhanging mystery, and in Rebirth’s case a real emotional core. Whilst Frictional’s narrative efforts have clearly matured over a decade and off the back of SOMA, the moment to moment horror outside of its thematic horror has been lost somewhere along the way.

Can you have both? I think both SOMA and Rebirth could have had their cake and eaten it here. In trying to get to the bottom of this by reading through interviews, one thing mentioned is a ‘scenario approach’ to Rebirth’s design. This makes one-offs like having to avoid direct sunlight at the beginning make all the more sense in retrospect. My complaint here is that this intentional design has inadvertently made it overly transparent – like being able to see the caliber of a watch. You know when you’re in danger and when you’re not. It can still catch you off guard, but the emphasis is on the thrills rather than the chills.

Unlike SOMA, which had such a divide in its narrative and monster horror that a popular mod eventually became an official ‘safe mode,’ perhaps spooked by this, Frictional have this time more firmly twined their narrative and monsters to be inseparable. Jump scares can be untraditional, and scripting is excellent, however much again this is all a bit transparent for 2020. Stealth mechanics haven’t evolved all that much either aside from your ability to go prone and certain monsters being able to sniff you out. There’s still that welcome desperation to it all, but it’s undermined by failure not coming at much of a cost. Whilst it’s nicely narratively incorporated, being respawned so close by with the enemy plucked out of existence isn’t particularly terrifying. 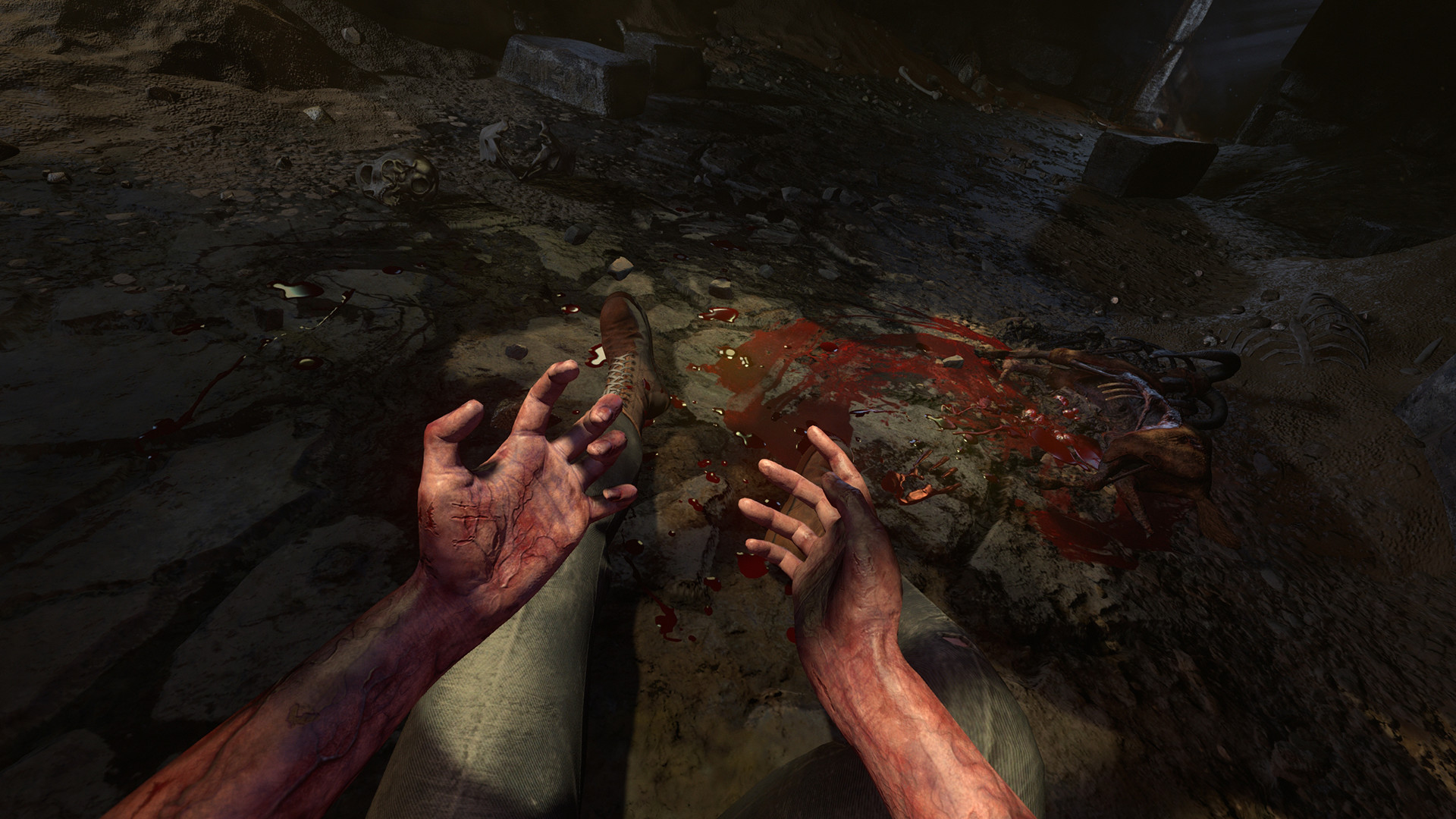 You’ll be much more scared of the dark. As with The Dark Descent, ‘fear’ is something that needs to be controlled. You gain it by being engulfed in darkness for too long or by staring directly at monsters, dead bodies, etc, and bring it level using available lights, and either a lantern or matches. Tasi is very sensitive to the dark with her affliction and will start jump scare-esque hallucinating within what seems like mere seconds at times. Whilst that might read like it would grate, navigating the environment does become more engaging and tense for it. There’s a nice balance between the use of the lantern and matches too. Matches are short term alone, but the best long-term solution if you have something to light. The lantern is the go-to long-term solution, but burns through oil quickly so should be a last resort. It leads to very natural management of resources and switching between the two. The consumable laudanum from The Dark Descent is again teased, but you’ll only find the one.

As with all past Frictional games, the world is very tactile with you being able to freely rotate and throw almost any object. Some larger objects require two-handed manipulation, which translates to you needing to physically move instead of just a gesture of your mouse. Rebirth doesn’t try to be a perfect simulation like a Half Life: Alyx, however. Wine bottles often don’t smash, and sledgehammers fall with the tinny impact of a regular hammer. What it does lend itself to is puzzles that feel almost as grounded and immersive as such a VR game. A very light inventory system allows for more flexile room to room puzzles, and most puzzle pursuits are nicely grounded in the world. That doesn’t mean there isn’t some game logic at play, of course. Whether you’d really be up to building an explosive from scratch in such a perilous situation, I don’t know. The best details of all are in Tasi’s reactivity to the world. As a protagonist, she’s both believable and excellent company. Details like blurring vision as you look down at a drop and hearing your heartbeat as you prepare for death-defying leap only add to the grounding the tactile world provides.

Above all else, Rebirth knows how to tug at the heartstrings. The parallel story that plays out in Tasi’s stunning hand drawings will destroy any cold heart. Rebirth feels an overwhelmingly pessimistic and heartbreaking play at times, but just like SOMA, it presents some chance for optimism at its end; some antidote to its horrors. That’s the part I always loved about SOMA, and I now do about Rebirth. This is storytelling done right. It’s just a shame it couldn’t quite keep The Dark Descent’s all-pervading atmosphere along for the ride.