Do you remember Worms? Yeah, the first one. No, I’m not that old; stop.

When I first booted the game, I was received by some 80’s styled rock song talking about marshmallows, which of course, confused and scared me to no end. Shortly after, a janky tutorial popped in where I learned very little about the game, thus starting to play Warshmallows. And I fell in love almost instantly.

What first captivated my interest was how short the rounds are in a match. Not only because of the fights having 4-player matches only, but also due to how dynamic the movement and shooting mechanics are. Of course, since the rounds are short, matches balance that, making the winner whoever reaches the 5 won rounds.

This brings a lot of possibilities, where even doing a poor performance at the beginning can be tweaked by persevering in later rounds. However, no matter your score, you will gain EXP, which will help you to unlock further firearms, superpowers, and clothes for your marshmallow of choice as you level up.

The first thing we learn in Warshmallows is how to shoot. We have a limited number of bullets, which we can reload in several specific points across the stage. We have access to different types of bullets, but the gist of the combat is the same, overall: we shoot our enemies, and they get covered in stone, forbidding them to do anything else until there’s only a lone remaining marshmallow, which marks the end of the round. 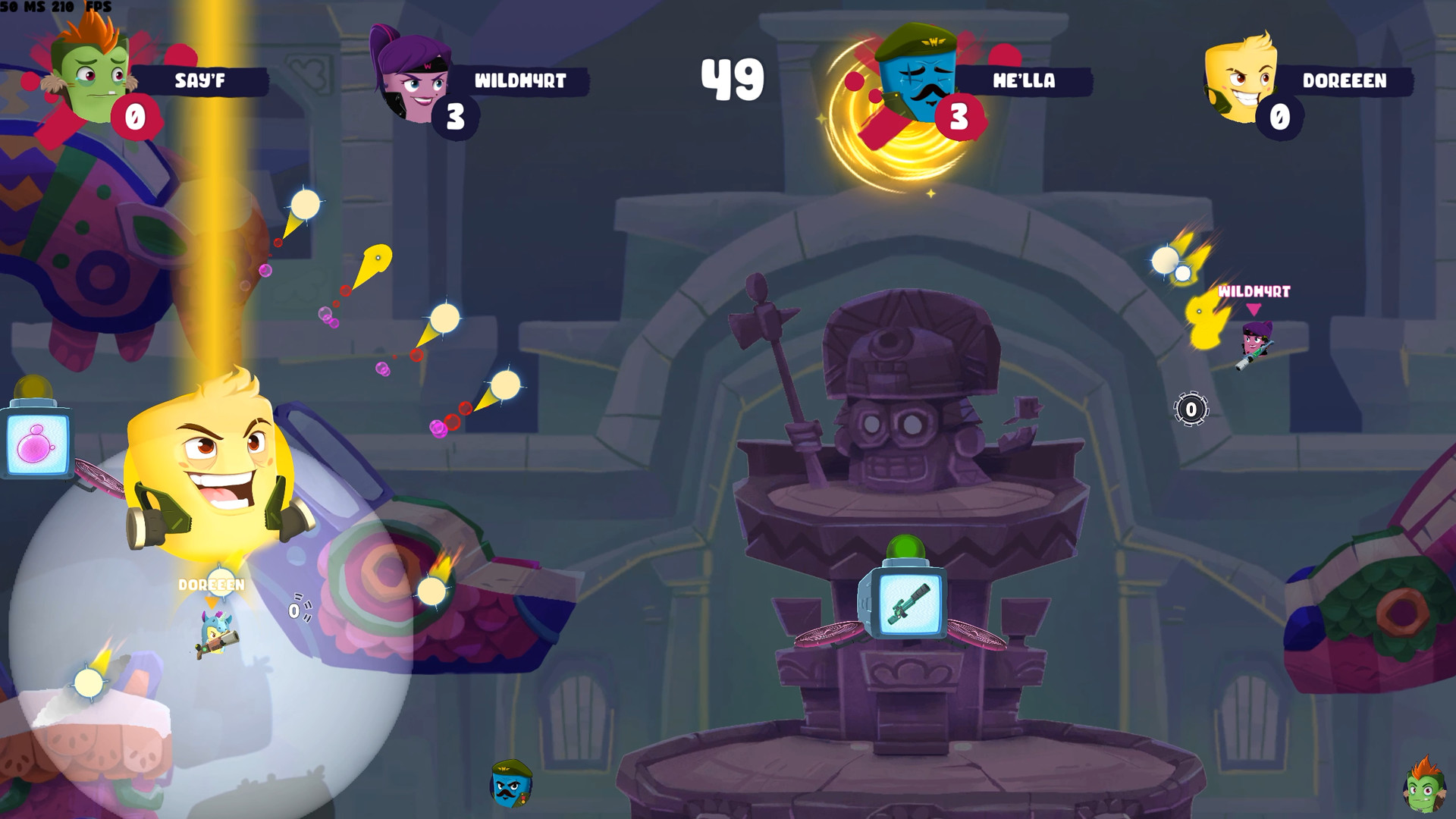 Another mechanic comes as a slow-motion sequence triggered right before a bullet hits you so you can take any countermeasure, like evading the bullets or jumping your way out of their path. Mind you; your opponents can do exactly the same, so as much as you get a time window to react in combat, they will do as well.

Evasion mechanics are really comfortable to use and easy to grasp. You have up to three jumps you can chain that can help you reach higher ground, a quick dash that you can use mid-air to get away from the line of fire, and even a flight mechanic, which, to be fair, wanes a bit against the way more useful quick dash, but still helps in the proper situation. Used well, these mechanics give you a lot of versatility and are immensely helpful to better position yourself across the stage, so get comfortable with them as soon as you can.

Stages are another separate thing. Not only they’re a nice background with platforms to position yourself as you try to annihilate other sentient marshmallows. They also have additions like teleport gates, which you can traverse to appear in the other corner of the stage, or shoot at them, so the bullets caught your enemies with their guards off. This, intertwined with the rest of the mechanics, bring a wide array of strategies and possible ways to face your enemies within a match.

Whether you go guns blazing or take a more indirect strategy, no matter the approach you take, Warshmallows will ensure you hours of fun, with the silliest marshmallow clothing, a soundtrack born in heaven mixing funk, hip hop, and 80’s rock, and, why not, victorious marshmallows, dabbing in delight after winning a match round.