Deck-building roguelikes are still extremely popular. Ever since Slay the Spire—the archetype of the genre—rocked onto the scene, card games have increasingly added roguelike elements to their play, whether it’s Hearthstone’s upcoming Mercenaries mode or popular genres like card based dungeon crawlers. But many of these games also experiment with the formula in their own way.

One such example is Trials of Fire: the result of combining roguelike deck-building with turn-based tactics. You command a party of three characters who undertake a variety of survival-based quests in a bleak post-apocalyptic fantasy world. You see, some Elves were mucking around with magic and accidentally caused a cataclysm, leaving only small bands of settlers clinging to life in a lawless and monster-filled wasteland.

You brave this blighted landscape in pursuit of a number of quests, traveling across an overworld filled with two-dimensional cutouts of villages, ruins, and monsters. There is also something very ‘choose your own adventure’ about Trials of Fire, as at any time you can deviate from your quest and investigate one of these points of interest. Doing so activates one of several procedurally generated scenarios you can engage in: typical fantasy fodder that ranges from helping a merchant, who’s being robbed by bandits, to fighting a giant monster lurking in a treasure-filled ruin. While pretty bare bones in terms of writing, they often require you to fight battles. 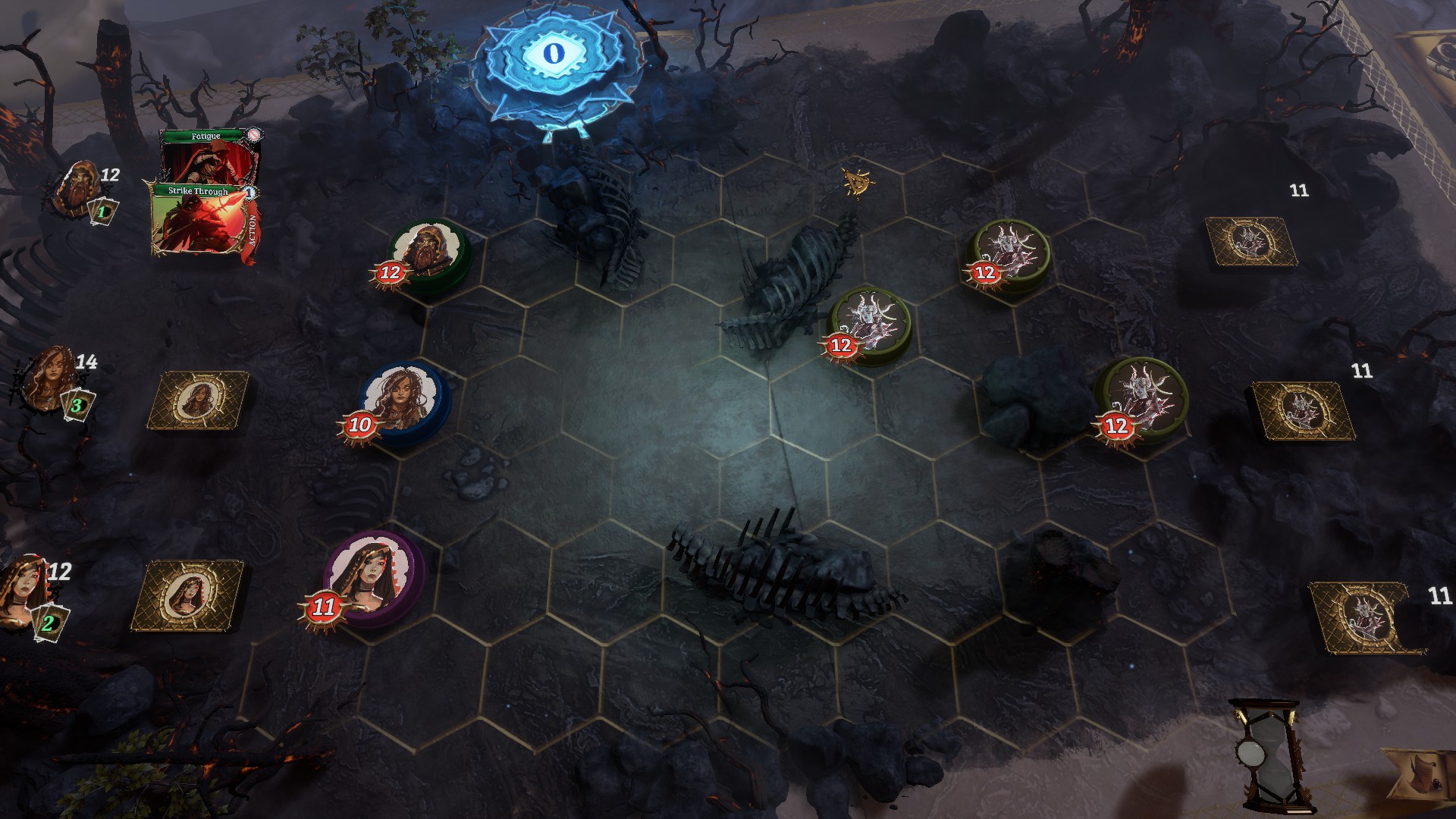 Combat is where Trials of Fire really shines. Your adventurers and their enemies will drop into a hex-based arena and take turns to act, using a mana pool to activate cards linked to each character. Trials of Fire features the mechanic that many might know from deck-builders such as Mythgard, that lets you discard cards to claim mana. Discarding a card also grants that specific adventurer either a free movement or two armor. It’s a smart system that allows you to repurpose unwanted cards into other strategic possibilities.

Tactics are also an important consideration. Combo strikes, for example, are free attacks that activate when multiple characters are adjacent to the same enemy, which maximises the importance of choke points, especially when enemies use combo strikes as well. Your spellcaster’s attacks also rely on area of effect damage and enemies being close to one another. Finally, cover is important, as ranged attacks are some of the most powerful moves in the game, and can quickly whittle down your characters’ health.

So how do you get stronger? Well, equipment adds new cards to each character’s deck. A basic club, for instance, might give your warrior one high damage attack card, whereas a legendary sword might grant them three. You can also hone and upgrade equipment with crafting materials, which lets you remove a card or increase its power respectively. Levelling also offers new cards, and meditating—by using a mystic herb—allows you to upgrade or forget a card from your starting set. Trials of Fire offers plenty of options for deck-building, even if mystic herbs are quite expensive and hard to come by. 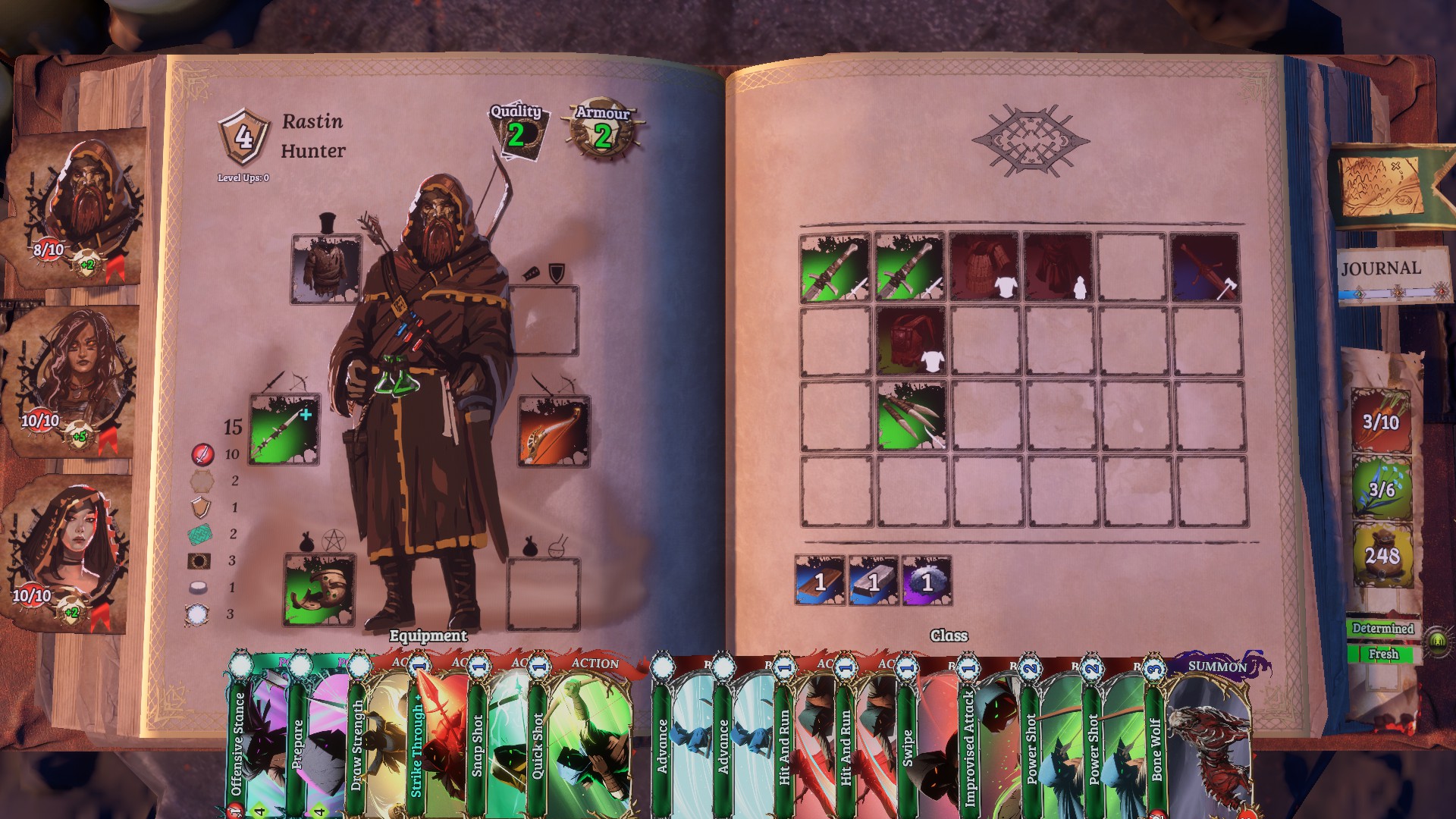 Unfortunately, decision-making in Trials of Fire is quite flawed. The written scenarios that the game presents makes up its narrative, but by telling us the rewards and outcomes for every decision, it eliminates the purpose of these choices entirely. I found myself making decisions based upon resources, and nothing that the game offered in terms of story was enough to convince me to do otherwise—especially not when those resources are the key to surviving each quest..

But at its heart, Trials of Fire is a survival game in the way only roguelikes can be: where each battle, decision, and knock-on-effect can determine your demise further down the road. It’s also very tough as many encounters spawn a random number of enemies. Trials of Fire’s card system makes being outnumbered feel a little unfair at times too, as the opponent has more cards to work with, as well as more potential mana, more armor, and more movement to gain from discarding them.

However, its smart mechanics, survival play, and deck-building make up for any criticisms I have leveled at it. I’ll definitely dive back in for another adventure before too long, though perhaps on a lower difficulty…

Sean isn't sure what he wants to be yet, but games seem cool. You can find him at Eurogamer, PCGamesN, Wireframe, and PCGamer, or chatting about anime and Total War at Twitter: @lorescavm