Not Another Weekend Review

I wasn’t alive in the ‘80s. I was barely even alive in the ‘90s. When I finally gained access to my very own computer and the option to play whatever I wanted, we were well into the new millennium. I say all this to illustrate how out-of-place my nostalgia for point-and-click adventures is. In recent years I’ve gone all the way back to the genre’s roots, through Grim Fandango and Monkey Island to the likes of King’s Quest.

There’s a distinctive, indelible charm to these games. Their bizarre puzzles and unintuitive logic can feel absolutely rubbish at the time, but brings joy whenever you look back at it. It’s clear that developers in the ‘80s weren’t about making things easy; Sierra and Lucasarts were absolutely fine if you were stuck on a puzzle for weeks on end, until you finally realise you were supposed to put a candlestick you’ve slathered with honey on a horse’s backside so it’d run through a shop, setting fire to the shack on the other side of the island―or something of that nature.

While that might’ve been okay back then, such puzzles would not fly today. Developers now have to rely on another approach to evoke that (unearned, for me) nostalgia, whilst also making the game less irritating and actually playable―without a step-by-step guide or a brain wired into the adventure game matrix of Sierra’s Roberta Williams.

So does Not Another Weekend achieve this?

In a word: yes. I’d sooner play Not Another Weekend a thousand times over than attempt to grind through a classic point-and-click game from years past. It’s actually possible to stay on-track throughout, something you can’t undervalue in a game like this.

Making a playable adventure game in 2021 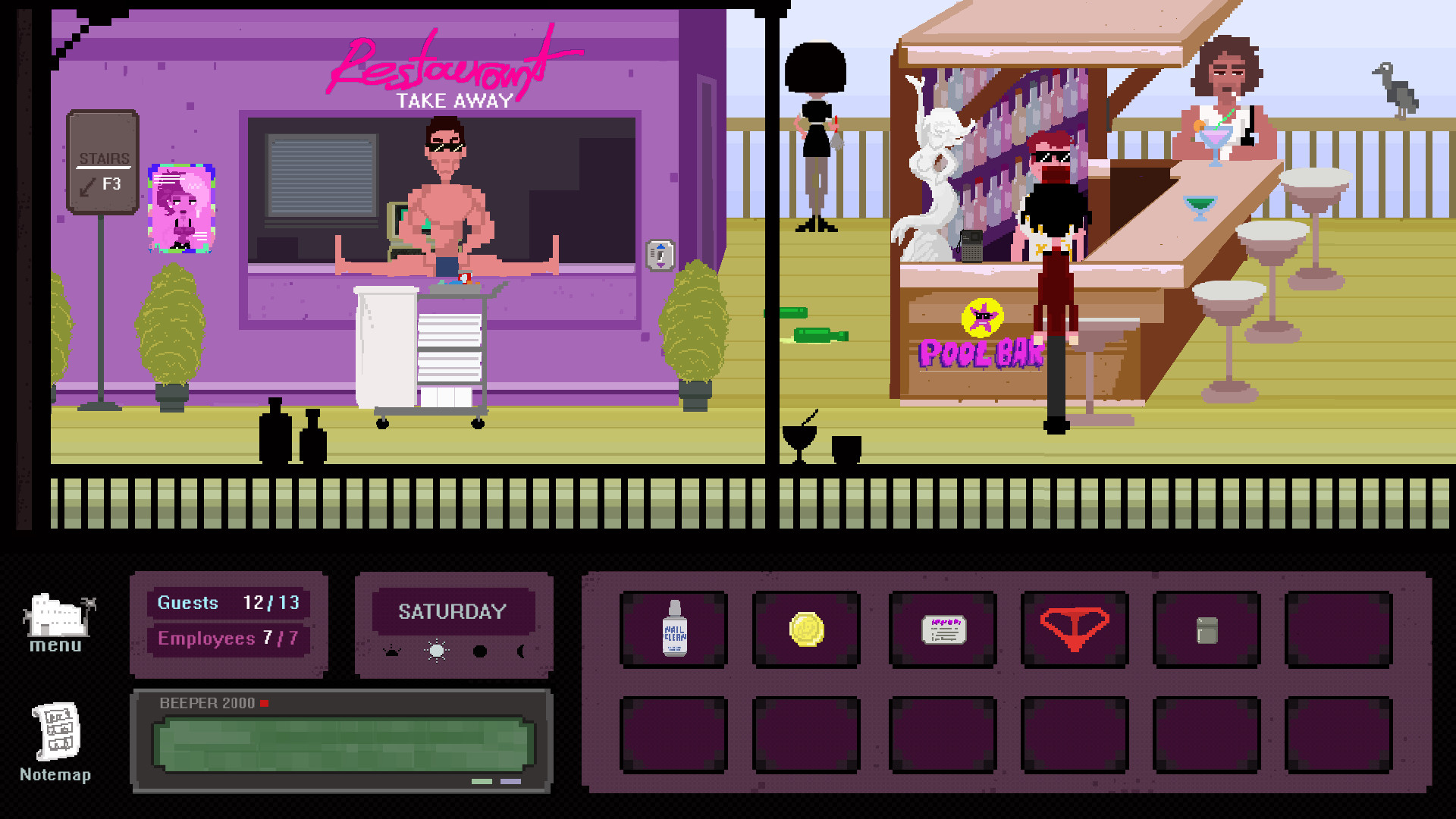 Upon booting the game up and appreciating the groovy soundtrack, the premise is clear. Get everyone out of the hotel―staff and guests―in a single weekend in order to appease the disembodied brain of your mysterious uncle. As Mike the bellboy, you’ll spend all your time at a hotel, which, for an adventure game, is a smart move; it showcases a lot of individuality, with every facility and guest room possessing its own style that immediately informs you of the scope of your adventure. You aren’t journeying to faraway islands, or slaying dragons across countless continents. No, you’re stuck here, in Hotel 404, with nothing but the hotel rooms and staff to keep you company.

The setting is a great strength, which means when you do run into issues (a few times I found myself stuck with an unexplained roadblock), the ‘talk to everyone again’ process doesn’t take you a prohibitive amount of time. You aren’t trying to take on the entire universe in one go, and the focus the game has allows for some nice connections between characters and points of interest to flourish. A small example of this is when you notice a character listening to the radio, and the contents of that radio show must be shown to another character in a different part of the hotel; little narrative bits that link the hotel to itself are scattered all over the place.

Not Another Weekend also features a big pile of seriously handy features too, including the ‘Notemap’, which keeps track of how many people you still need to kick out of the hotel, and allows you to fast-travel to any floor. You can also hover over each customer’s room for some idea on how to get rid of them, which helps you figure out what kind of ridiculous-yet-somehow-kind-of-logical methods you need to employ.

One thing I’d have loved is a hint system though. When Thimbleweed Park did this, it was an absolute delight, as it tailors the experience of running through the adventure to your own preferences. The times I got frustrated playing Not Another Weekend were chiefly when I was trying to trigger certain quests and activate storylines I’d already figured out, prior to being ‘allowed’ to do them by the game. The ability to check if I need to talk to a specific person to get back on track would have been useful. It’s a weird situation to be in, because I love when a puzzle comes together, and knowing what’s going on makes me feel very smart and sexy, but when I’m unable to use the item I need because Mike is a step behind me, does occasionally take me out of whatever immersion you can expect from a bellboy simulator. 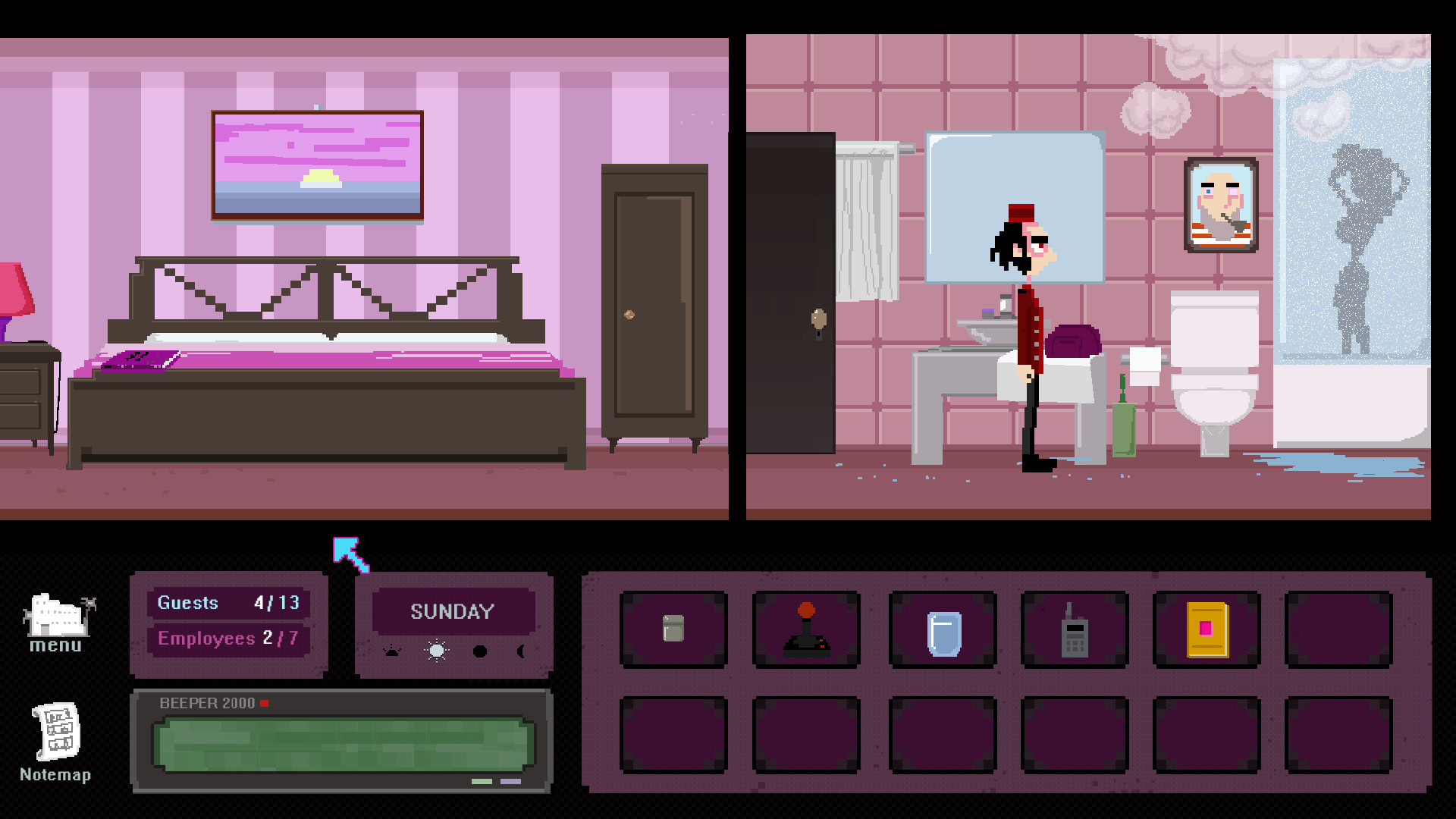 Not Another Weekend also impressively evokes the era of the ‘80s. Take for instance the art of the hotel, which serves Maniac Mansion energy but with a modern garnish, with the colour palettes resembling an exaggerated version of a real hotel.

For the most part, the character designs do a really good job of showcasing the personalities of the characters. A couple are tough to tell apart (on account of them being buff bodybuilders with few other personality traits), but on the whole, their look and personalities are a good match. I especially liked Jonny Cocktail, the bartender whose name makes him sound like a made-up outtake from a Bob Mortimer story. Conversely, Mike himself has a few more expressions and movements, but his snark and world-weariness aren’t expressed quite enough outside of his dialogue. 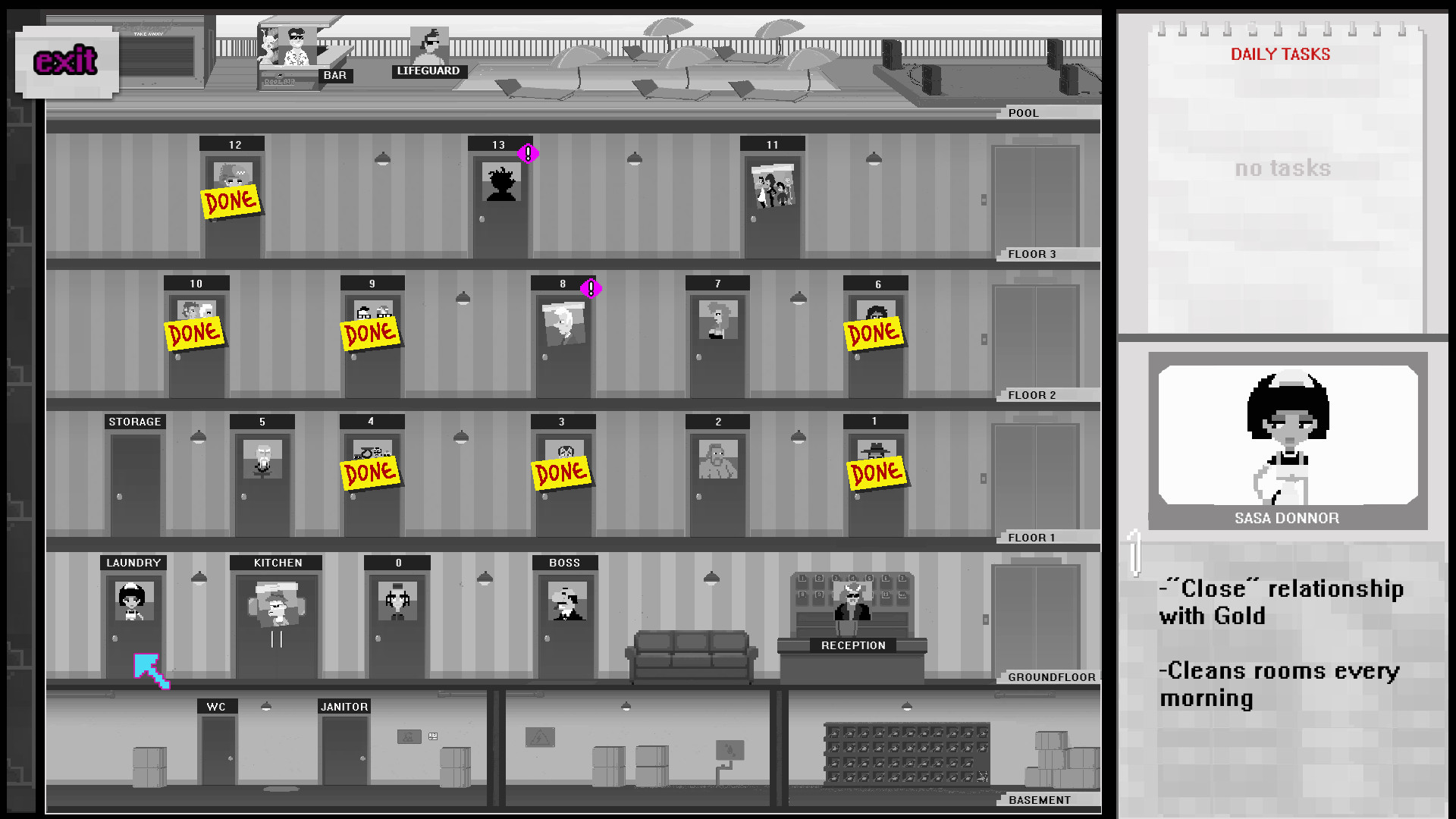 Despite being drawn to the setting, I was initially curious as to how Not Another Weekend would keep me entertained when your motivations are hidden from the very beginning. Mike has reasons for wanting to kick everyone out of the hotel, and you aren’t told them until much later. It was a shame and made me far less invested in what the game had to offer, even though it did allow for some enjoyable reveals later on.

Thankfully, emptying the hotel becomes its own reward―I think it’s my video game brain enjoying the sport of making numbers go down to zero (in this case, guest and staff numbers)―and you don’t necessarily have to care about the backstory until it becomes relevant again. It’s by no means a thriller, but it’s enough to make the game worth sticking with. There are some entertaining dialogue and scenes to reward you for each successful eviction too. Interacting with the characters and watching them chat with each other is just enough to keep you interested in how Not Another Weekend will proceeds.

The jokes and comedy are a bit more hit-and-miss. There’s some funny moments, where you’ll spot a Weird Science or Terminator reference which actually ties into the story, but there’s also a ‘Half Life 3 Confirmed’ joke that made me audibly sigh.

It’s also necessary to highlight a potential content warning for one part of the game: in one task to kick someone out, you have to trigger a survivor’s PTSD and encourage him to commit suicide, which is then played for some pretty boring, incomprehensible laughs―something in reference to him competing in the ‘hotel balcony nationals’. Even in the context of the game, where the jokes are a mix of wink-nudge references and silly schoolboy humour, this stood out as something that absolutely didn’t have to be there.

If this doesn’t put you off the game though, I’d definitely suggest giving Not Another Weekend a shot. That said, it’s a tough one to strongly recommend because of how polarising point-and-click adventures are. If you’re a sucker for this genre like I am though, you’ll appreciate the ways Not Another Weekend fools you into thinking ‘80s adventure games were in any way approachable and enjoyable to play. After all, this game has successfully implemented several quality of life updates to a genre that desperately needed the refresh.

Categories
PCReviews
Tagged
Not Another Weekend