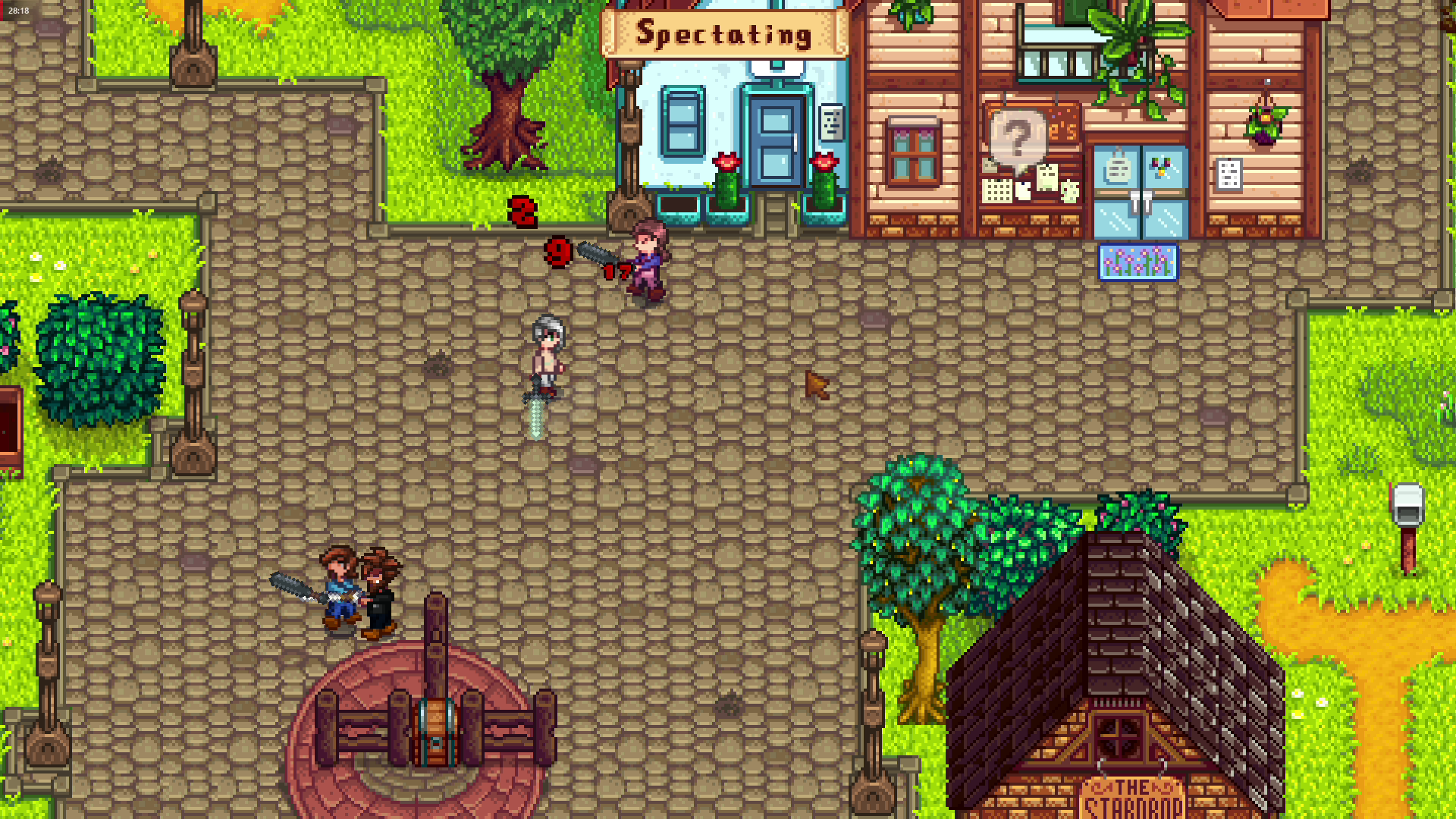 Wiping the sweat from your sun-kissed brow you take a moment to take in the breadth of your work. Your farm stretches out as far as the eye can see in every direction. Each crop is personally tended to and arranged with perfect symmetry. It’s everything you could ever want. The 100+ hours you’ve spent building your farmstead have been well spent, but there’s a world of opportunity out there you might not have even considered yet. You see, in Stardew Valley’s vibrant modding scene almost anything is possible.

In Stardew Valley, players set off on an adventure to start a new life as a farmer after inheriting their grandfather’s old plot. Armed with only rusted tools and a handful of seeds, you’ll have to face the Joja Corporation in efforts to revitalise your farm and the surrounding community. Players are already offered a liberal amount of freedom throughout Stardew Valley; creating, crafting and customising a wide variety of in-game items and buildings. Stardew Valley’s mods, however, take those options far beyond anything solo developer, Eric ‘ConcernedApe’ Barone could have ever imagined.

Just in the week of this publication alone, the Stardew Valley section of Nexus Mods, a popular hub for mod uploads, discussions, and news, received over 20 brand new pieces of high-quality content. Mods open up Pokemon reskins, completely new buildings and locations, a map mod that allows you to view the locations of each NPC, a gift-taste helper – there’s so much to explore and so much to build on that the community has come alive with inspiration. So, what is it about Stardew Valley that has attracted so many creative players with the motivation to develop their own contributions to the game’s ecosystem?

“Stardew Valley has a unique blend of traits which attracts a lot of players,” says modding community member Pathoschild. “And the modding community is very supportive towards newbie modders so it’s easier to get started.” 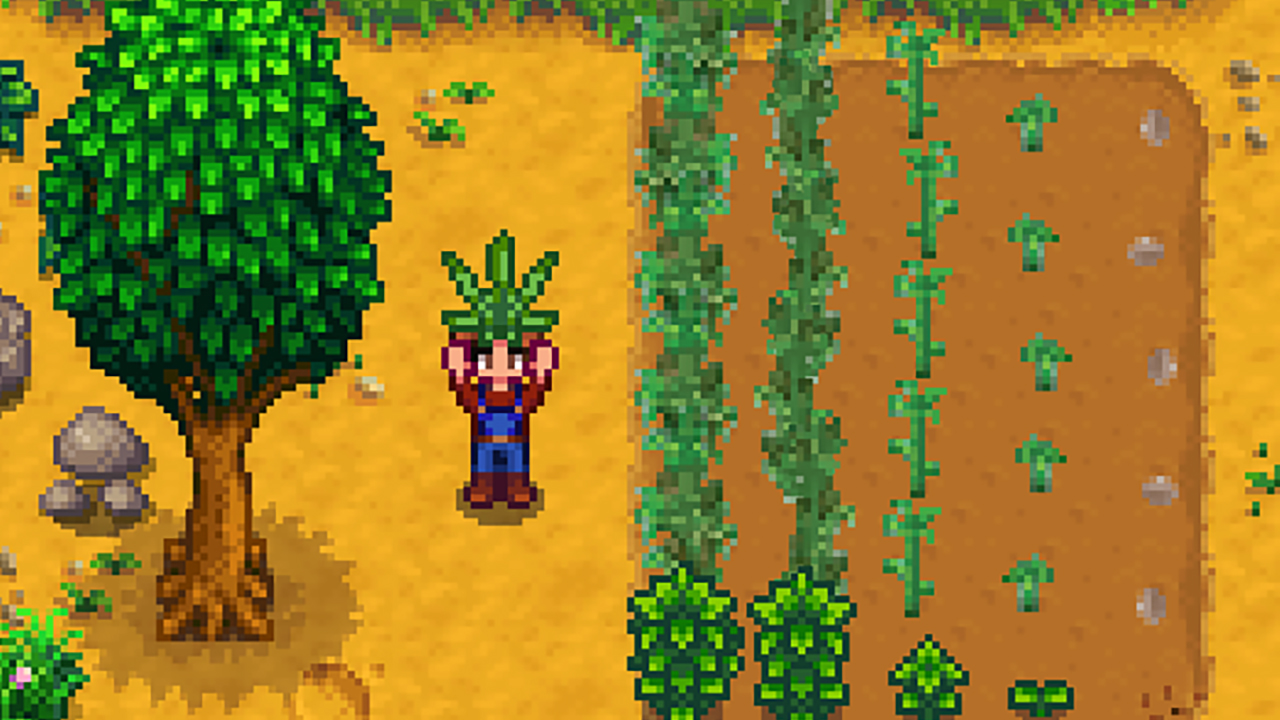 That’s not a lie either. One thing that distinctly stands out about Stardew Valley’s modding scene is their welcoming nature. Newcomers are encouraged to experiment with the game and learn from other people in the scene. The community that has grown around Stardew Valley reflects the tranquil nature of the game itself. Pathoschild ensures us that “it’s very open and friendly, newbie modders are welcome (without the elitism you find in some modding communities), and the game itself has attracted a really nice player community.”

Through this tightknit community, hundreds of mods have been created that have the power to transform this pixelated farming simulator into a bloodthirsty battle royal or allow players to take an even more chill approach to tending crops by growing and farming their own weed. It’s not all brand new game modes and hilarious basegame manipulation though, there’s also a whole host of mods designed to help players overcome disabilities or challenges in actually playing the game.

Modding community member Zola tells us, “I have a minor eye issue, so looking at bright and saturated colours for an extended period of time gives me headaches. To find a way to fix this, to be able to play more than half an hour at a time, I tried to look for some mods. Luckily, there was ‘Eemie’s Map Recolour’”.

“I found it didn’t completely suit my needs, so I made my own with the help of the community. After two years, I’m now the one helping!” Such cyclical development is critical to a successful modding community, or any creative collaboration, so it’s promising to see these exchanges occurring within the Stardew circle. 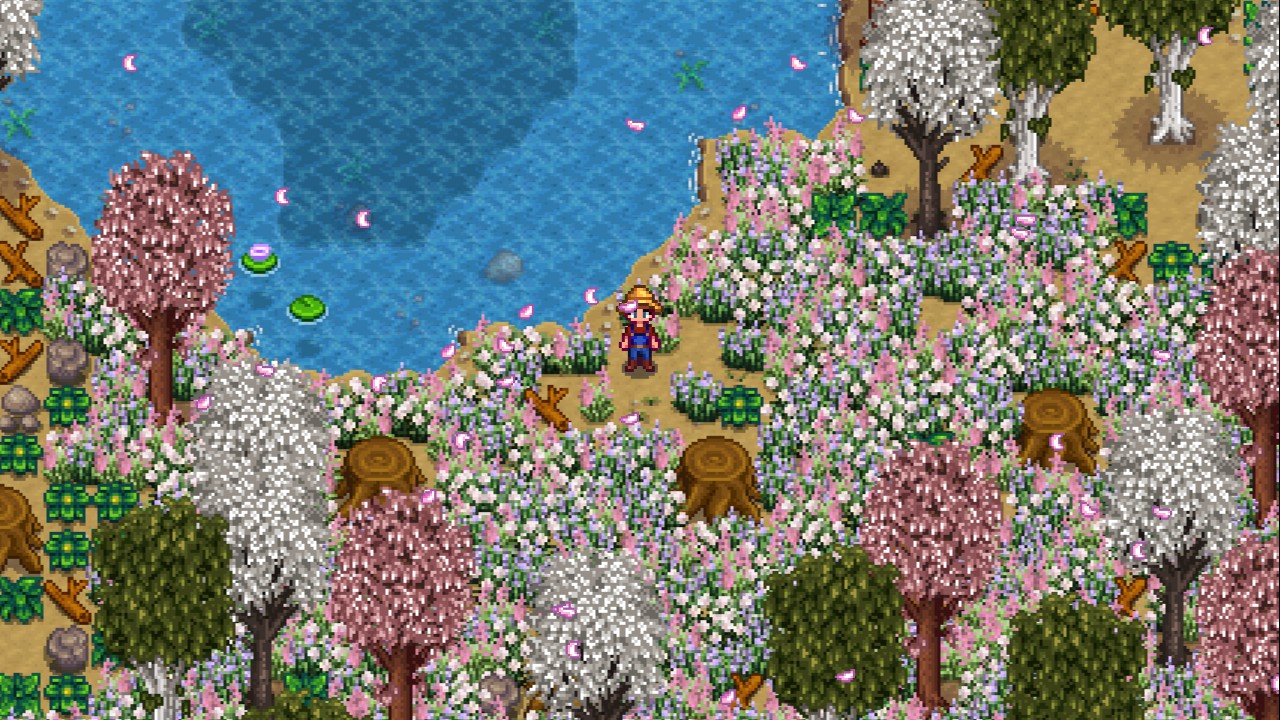 It doesn’t stop there either, mods offer more than just free additional content. Pathoschild explains that “mods extend the game’s longevity for many players, and make it accessible to more players, like mods to reduce clicking for players with wrist issues, or text-to-speech mods.”

In this way, Stardew Valley shines a light on a side of the modding community not often discussed. Mods designed to tackle accessibility issues game developers often don’t have the time or the resources to address can open up gaming to brand new audiences who would have otherwise been locked out of a hobby. Your typical mod might change the world that players inhabit but they can also change the way people engage with a game and the Stardew Valley modding community are at the forefront of this.

“Mods are my favourite feature of PC gaming,” says Ilyaki, creator of Battle Royalley, a Stardew Valley battle royale mod. “Content mods expand the game beyond the developer’s vision, and technical mods can fix and improve upon the game’s features. Then there are goofy mods designed to be funny.” 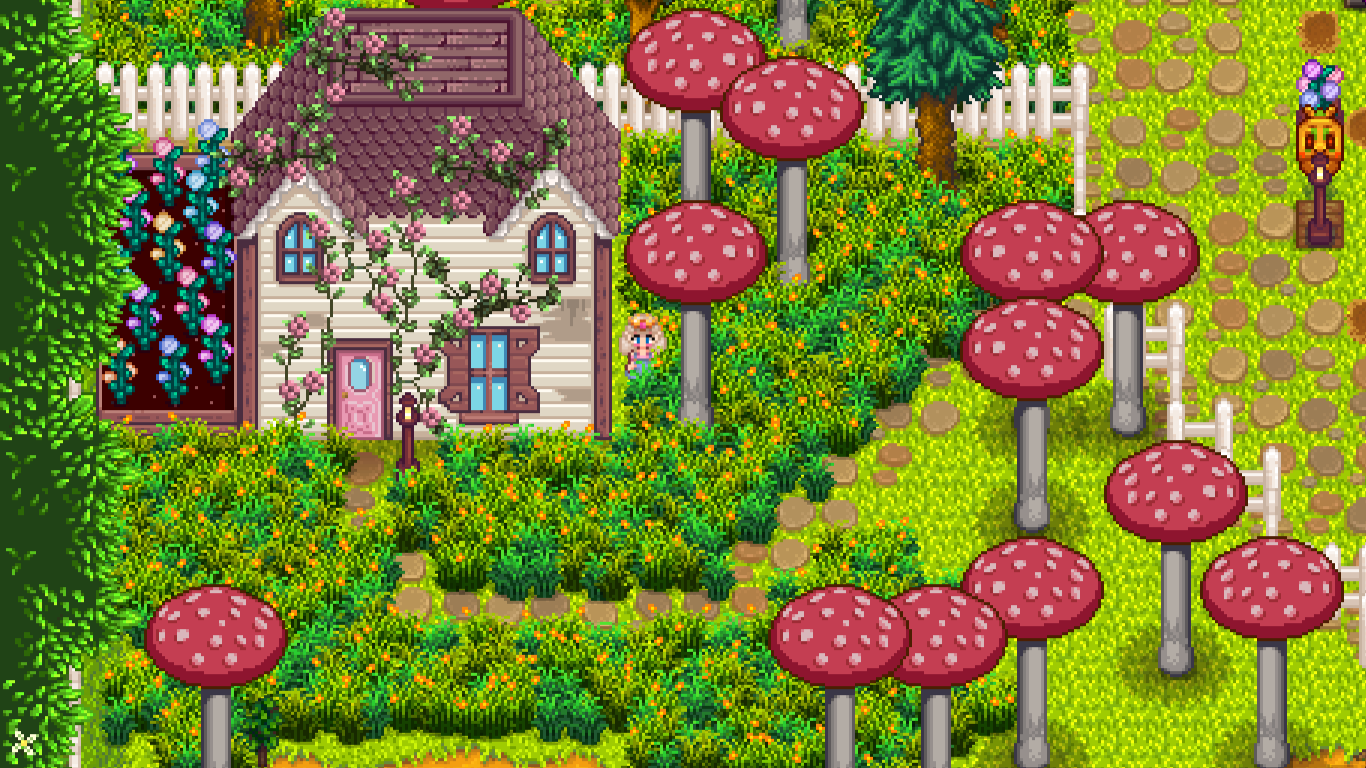 Stardew Valley’s modding tools are one aspect of what makes the scene so vibrant. Several programs allow players with little to no programming experience to create and edit mods. It’s simple to modify the game’s XNB files or, for slightly more complex projects, there’s the easy-to-use and regularly updated community modding API. There’s also now a Content Patcher that allows anyone to change game data, images, and maps without even touching the original files. The community continues to find better and easier ways for players to indulge their creativity through mods all while introducing more people to the scene.

“Simplicity and freedom,” is what makes Stardew Valley so attractive to modders says community member Entoarox. “Getting started modding SDV is relatively easy, and there is almost nothing you can’t create if you are willing to take the time.”

Modding is a traditional path of independent game creation; we’ve seen it time and time again in the history of the industry. The more people that can be helped onto that first stepping stone, the more unique voices we generate for the independent industry. The ability to not only accommodate beginners, but inspire creators of all skill levels is certainly not unique to Stardew Valley, but is definitely a central factor in the success of the community and a promising sign of things to come. 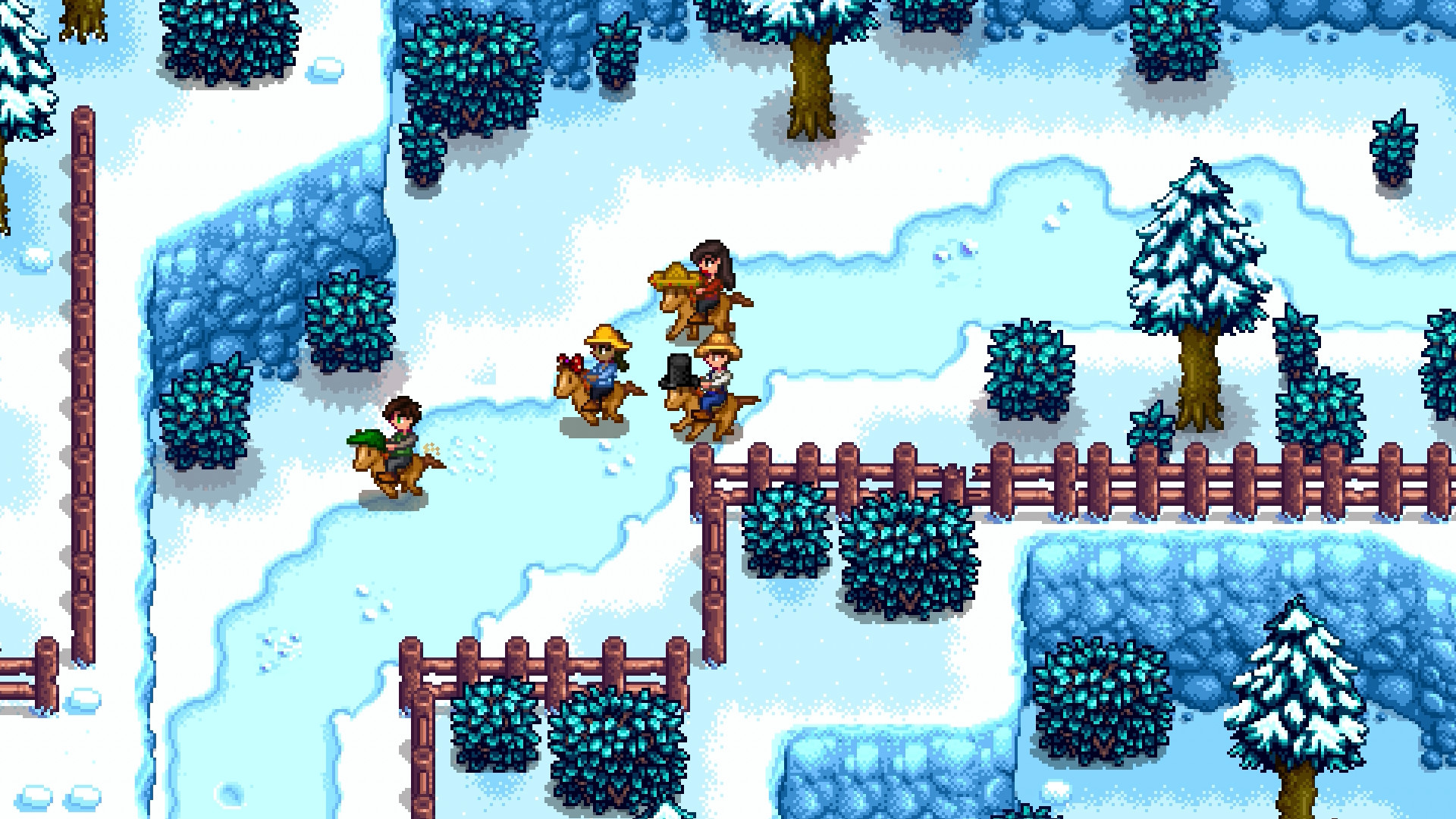 This seems to be one of the driving forces behind Stardew Valley’s diverse selection of mods. Traditionally, making mods has been considered a complex process, but with a supportive community behind it, Stardew Valley is empowering all players to try their hand at creating something or getting involved in some way.

“I hope we see more large content mods,” says Ilyaki. “Such as a new story or a different map to explore. It would also be interesting to see mod teams form to create one large mod – most Stardew Valley mods I’ve seen are solo projects.” It’s true, the creative potential lying in this modding community is unbounded, and with continued application and development, we could see some truly amazing movements in the modding scene. Opportunity breeds experimentation and given the fact that the independent industry received its own start in life from a vibrant modding scene, who’s to say what these early creators will accomplish.

Indeed, it’s easy to see how the indie tradition is alive and well, even in its modding scene. As Entoarox explains, modders “nearly always do this out of love for the game rather than any monetary gain”. The creative spark of collaboration continues to fuel the independent community of both developers and players, and nowhere is this more apparent than in the independent modding scene. 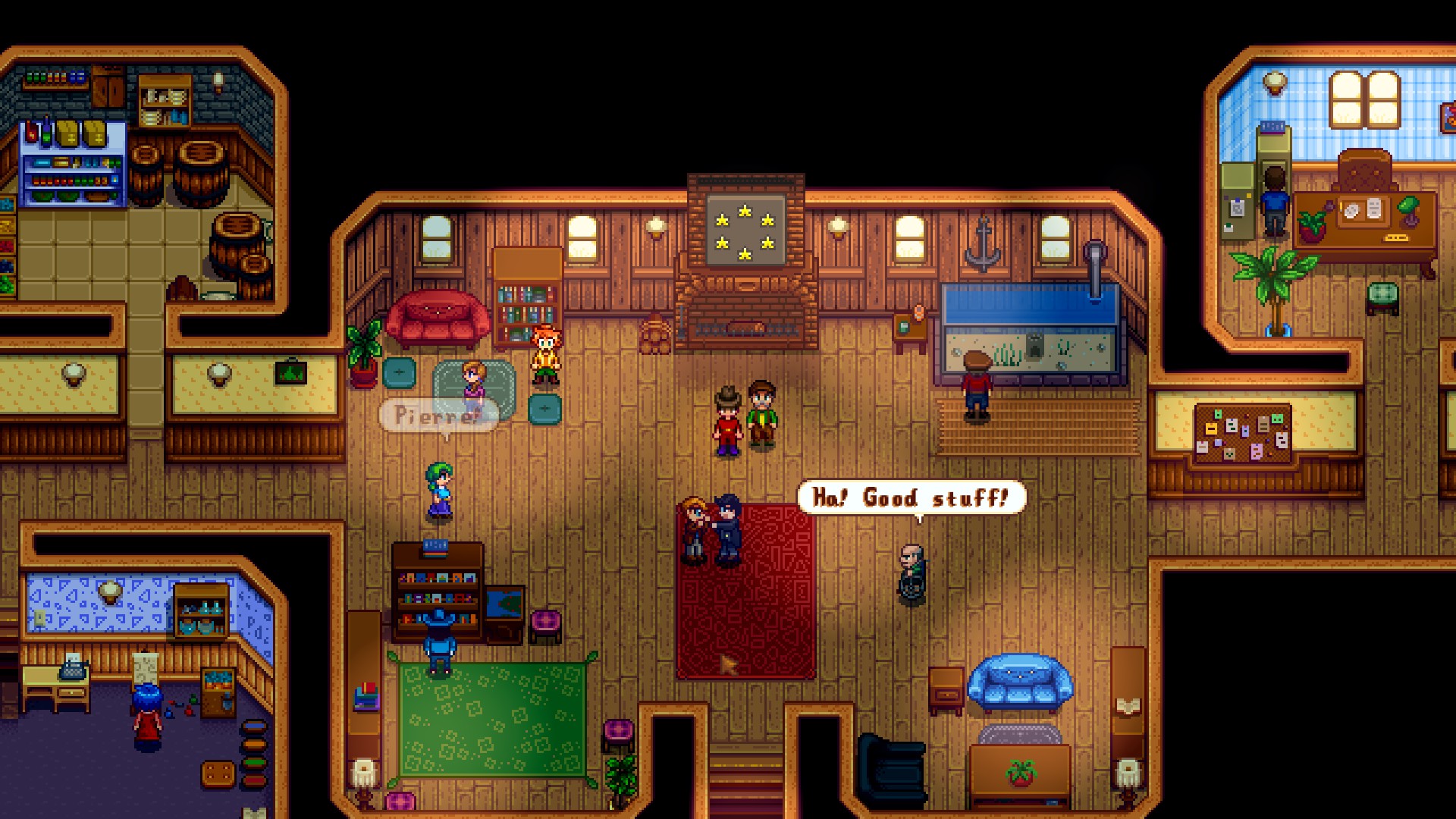 It’s been that way since the beginning. Ilyaki recalls how they were first introduced to the modding community through Minecraft mods. “After setting up my first mod, I remember feeling that I could mod anything into the game, if I set my mind to it,” they explain. “The first mod I made added a few wands that would shoot fireballs, lightning or make you fly on a rainbow sheep.” Engaging game worlds with creators heavily invested in nurturing the curiosity of their players are primed for a creative following. Being able to transform that following into a community as positive as that of Stardew Valley’s modding scene demonstrates a lasting potential for the power of the player, a power that is driving the originality and motivation of today’s modders. From the early days of Minecraft to today’s Stardew Valley, indie games have consistently proven themselves as a hotbed of creative players and developers keenly invested in nurturing that desire to build.

It’s this sort of ambition and drive that continues to grow Stardew Valley’s modding scene and bring new, interesting and adaptive ways to play the game. With over 3.5 million copies sold, the scope of possibilities continues to expand beyond what creator, Eric ‘ConcernedApe’ Barone could have ever expected. With the addition of multiplayer opening up even more opportunities for community-based mods and an ever-increasing roster of committed community members, the scene is showing no signs of slowing down.

“Honestly, at this rate, I don’t need to hope for anything,” reflects Zola. “Everything is already there. As long as the game stays as easy to mod, and the community as helpful and friendly, our future looks bright.”